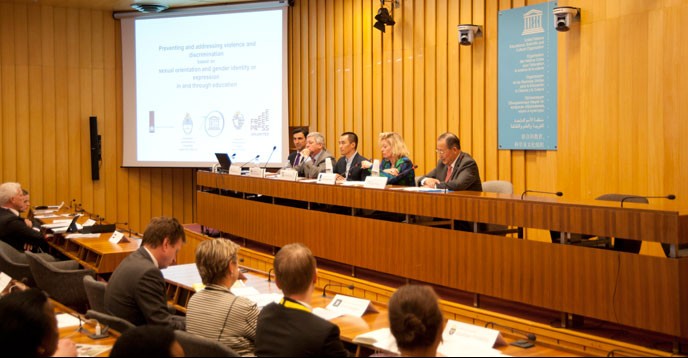 A high-level event on Preventing and addressing violence and discrimination based on sexual orientation and gender identity/expression in and through education was chaired by the Dutch Minister for Education, Culture and Science, Ms Jet Bussemaker, on 4 November during the 38th UNESCO General Conference.

At the event Assistant Director-General for Education, Dr Qian Tang said a great deal had been achieved in the area of education and discrimination since the launch in 2013 of the UNESCO project Education and Respect for All: Preventing and addressing homophobic and transphobic bullying in educational institutions.

Dr Tang said: “Discrimination and violence in schools, including bullying, are a threat to the universal right to education. Victims of bullying and other forms of violence, often miss classes, have poorer academic achievement, and even drop out of school.”

The event included a short film on “Voices of young people”, a high-level panel with representation from different regions (Europe, Asia and Latin-America) moderated by Mr Tran Khac Tung (Director of ICS, a Vietnamese LGBT rights NGO), interventions from Ministers, youth representatives and NGOs, and a presentation on activities implemented by UNESCO and outlook towards the UNESCO ministerial meeting organized on the occasion of International Day Against Homophobia, Transphobia and Biphobia, 2016.