Following an extensive global consultation, UNESCO on 30 September submitted a draft recommendation on Open Science to its 193 Member States, a major step in facilitating international cooperation and universal access to scientific knowledge.

As of December 2019, UNESCO set up a partnership for Open Science bringing together science academies, universities, young researchers, libraries, and publishers, in line with the road map adopted during the Organization’s 40th General Conference in November 2019. The Organization also mandated an Advisory Committee of 30 experts from all over the world to prepare a preliminary draft Recommendation on Open Science after a global consultation with experts, members of the public, nongovernmental organizations and agencies of the United Nations. 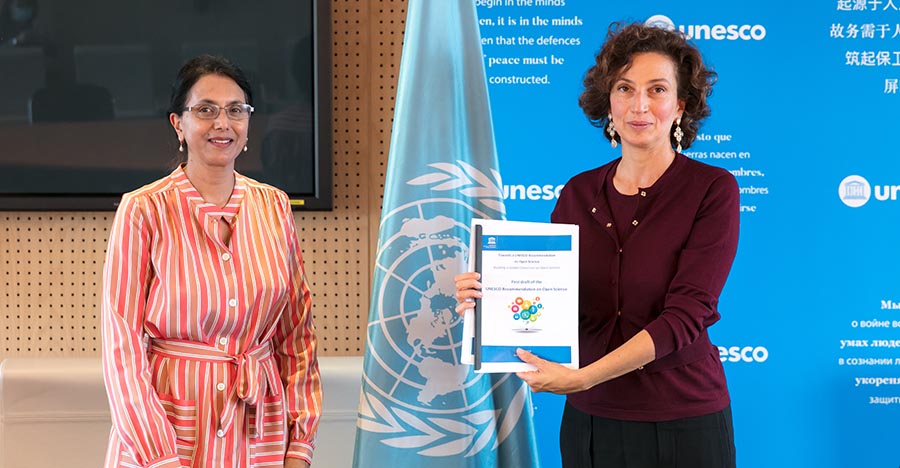 The draft recommendation reflects the wealth of perspectives, proposals and expectations that emerged from the consultations. In view of its vocation to become an international legal instrument, the draft takes into account the challenges facing the scientific community as a whole, as well as regional factors, notably in Africa. Overall, the draft notes the revolutionary potential of Open Science and highlights its importance in reducing the digital, technological, gender and knowledge divides that separate not only countries but people living in the same place. The successful and necessary transition to Open Science, outlined in the preliminary draft requires a change in scientific culture from competition to collaboration with due consideration for the ethical dimension of scientific processes.

The draft recommendation marks an essential step in the development of an international consensus around Open Science and the promises it holds for science to become more inclusive, cooperative, and also more innovative, it could help science unleash its full potential and take up the challenges facing our contemporary societies, such as global warming, the fight to end the shrinking of biodiversity and the struggle against pandemics.

The draft proposes a definition of Open Science, its objectives, a framework of shared values and principles, as well as an analysis of work that needs to be done before societies an benefit from the vast potential of Open Science, including indigenous knowledge systems. UNESCO’s Member States are scheduled to adopt the final draft during their next General Conference in November 2021.