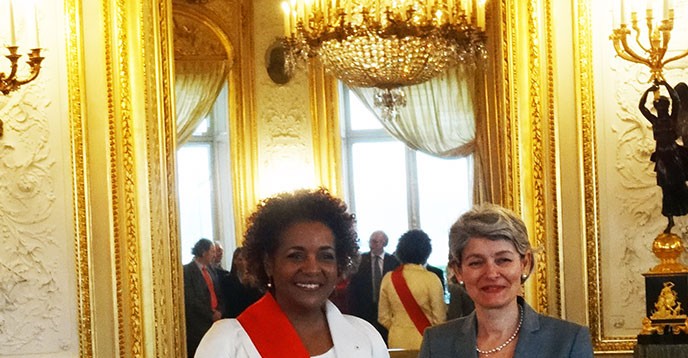 
On 13 March, the Right Honourable Michaëlle Jean, UNESCO Special Envoy for Haiti, received the Grand’Croix de la Légion d’honneur of the French Republic, in recognition of her struggle for the defence of freedom and the oppressed.

General Jean-Louis Georgelin praised her for the depth of the "values and commitment" guiding her commitment as well as her "unwavering courage to fight injustice in this world," on the basis of human rights, and “across all fronts.”

As UNESCO Special Envoy for Haiti, Ms Jean "has deployed relentless energy and strength of conviction following the earthquake, to support her native country in its reconstruction and will to break its dependence on international aid.”

In her speech, Mrs. Jean thanked France of the enlightenment for the values of “liberty, equality and fraternity - three words that have transformed the world " and "that woke up with my ancestors in their struggle for emancipation.”

She said that quality education, culture and sustainable development are “bulwarks against turbulence and destruction.” Referring to her visit to Haiti with the Director-General of UNESCO, she said "we crossed the country together, we know its will, its beauty and its potential."

During the ceremony, Irina Bokova congratulated Ms Jean and thanked her for her commitment to UNESCO and contribution to the Organization's activities in Haiti as Special Envoy.