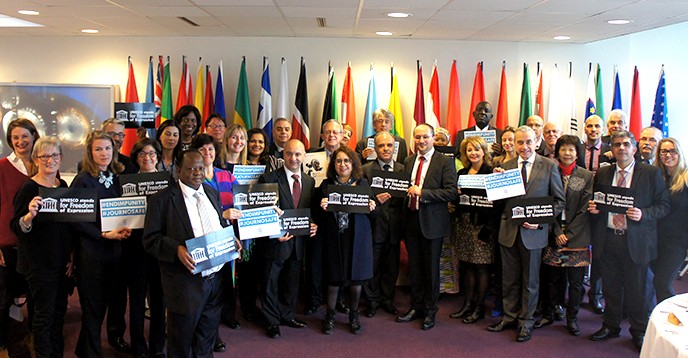 In the light of an unacceptably high rate of impunity for crimes against journalists, Member States pledge to cooperate with UNESCO in advancing its work on the safety of journalists.

According to the 2016 UNESCO Director-General’s Report on the Safety of Journalists and the Danger of Impunity, 827 journalists lost their lives for informing the public in the last ten years, and only 8% of killings have reportedly been resolved. Recognizing that the unacceptably high rate of impunity perpetuates a cycle of violence and poses a real threat for the right to access to information, development and the rule of law, UNESCO Member States have established a “Group of Friends” to advocate for UNESCO’s work on the safety of journalists.

At the initiative of the Austrian Delegation to UNESCO, 29 Ambassadors and Delegates met on 15 November 2016 in order to discuss with Frank La Rue, UNESCO Assistant Director-General for Communication and Information, and Nathalie Prouvez, Chief of the Rule of Law and Democracy Section at Office of the High Commissioner for Human Rights (OHCHR/Geneva), how Member States can better cooperate among each other and with UNESCO to prevent violence, protect journalists in danger and prosecute perpetrators.

“I welcome the initiative of setting up a Group of Friends on the Safety of Journalists at UNESCO, following similar initiatives in New York and in Geneva”, UNESCO Director-General Irina Bokova stated today. “Enhancing the safety of journalists has never been so important, and UNESCO is leading here from the front.”

In his opening remarks, Frank La Rue highlighted the close links between the safety of journalists and sustainable development. “Safety of journalists is not only a human rights issue, linked to the protection of two fundamental rights – freedom of expression and access to information. It directly impacts sustainable development and this has been recognized in the 2030 Agenda for Sustainable Development under Goal 16.10.”, he emphasized.

Representing OHCHR, Nathalie Prouvez described as “sobering” the fact that despite efforts being made, the trend of increasing violence against journalists is proving enormously difficult to reverse. “It is therefore of considerable importance that states, relevant United Nations Offices, in particular UNESCO and OHCHR, regional organizations and mechanisms, as well as civil society organisations redouble efforts to implement the UN Plan of Action on the Safety of Journalists at the international, national and local levels”, she said.

Delegates agreed on the benefits of a regular exchange and of joined efforts of countries that are willing to champion the fight for journalists’ safety. They agreed to meet at least twice a year to exchange on progress and measures on how break the cycle of violence against journalists.

According to Austria’s Ambassador to UNESCO Harald Stranzl, the inter-regional group is open, inclusive and will hopefully enlarge: “Any UNESCO member committed to the issue of safety of journalists is welcome to participate”.