Consuelo Valdés, Chilean Minister of Culture, Arts and Heritage, and Andrés Couve, Chilean Minister of Science, Technology, Knowledge and Innovation will kick off a dialog on art and science in the ALMA Observatory in Santiago de Chile on 26 August 2019. The round table entitled Symmetry. A meeting of astronomy, art and particle physics will be held with authorities and artists to identify new challenges, lines of cooperation and shared projects in the areas of science and culture in Chile. The meeting fits into the framework of Symmetry, an interdisciplinary exchange program of artists and scientists living in Chile and Switzerland. Limited space is available, to attend, please contact inscripciones(at)cchv.cl

Cross-cutting policies for science and culture, and programs that link creativity and innovation to the global sustainable development agenda are of increasing interest and importance. These and other topics will be discussed.
The activity is part of Symmetry, an artistic-scientific exchange program that invites artists from Chile and Switzerland to a shared residency program in some of the most extraordinary scientific research centers in the world.

It is organized in conjunction with Arts at CERN, ALMA, ESO, the Chilean Corporation of Video and Electronic Arts, the New Media Area of the Chilean Ministry of Culture, Arts and Heritage, and the United Nations Educational, Scientific and Cultural Organization (UNESCO). The initiative is backed by the Swiss Arts Council Pro Helvetia, as part of its “COINCIDENCIA - Swiss & South American cultural exchange” programme.

The meeting will include the participation of the Culture, Arts and Heritage Minister, Consuelo Valdés, and the Science, Technology, Knowledge and Innovation Minister, Andrés Couve, who participate in the first panel entitled Creativity & innovation: exploring the link between culture and science.  Silvia Rucks, Resident Coordinator of the United Nations System in Chile, will moderate. 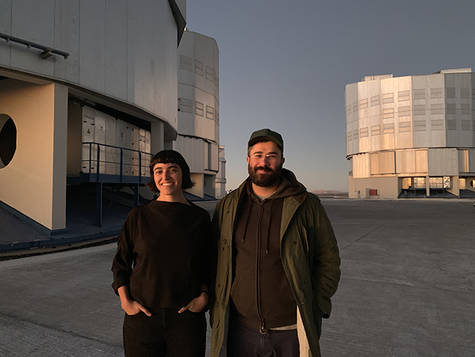 This will be followed by a talk entitled Experiences: dialogs between artists and scientific centers, in which  Chilean artist Nicole L’Huillier and Swiss artist Alan Bogana will share the initial results of Symmetry, after having visited the European Laboratory for Particle Physics of the European Organization for Nuclear Research (CERN, based in Geneva), and the ALMA and Paranal astronomical observatories, located in San Pedro de Atacama and Taltal, respectively. Enrique Rivera, Director of the Chilean Corporation of Video and Electronic Arts, and Bárbara Núñez, Press Officer of the European Southern Observatory (ESO), will moderate the panel.

Further details are available in Spanish.