“Many learners are amazed to discover that racism did not start and end in South Africa." 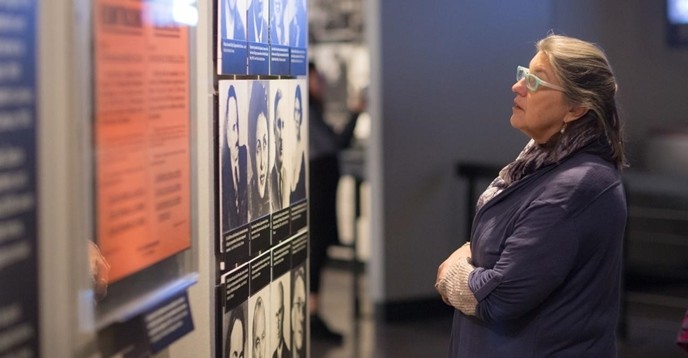 Linda Hackner is the Senior Educator at the Cape Town Holocaust and Genocide Centre, which is one of three information centers operated under the auspices of the South African Holocaust and Genocide Foundation (SAHGF). In December 2017, Linda participated together with her colleague Arlene Sher from the Johannesburg Centre in the second International Conference on Education and the Holocaust (ICEH), organized by UNESCO and the U.S. Holocaust Memorial Museum (USHMM). Following their participation, they have developed an educational programme on the Nazi regime’s “science of race”, linked to the USHMM traveling exhibition “Deadly Medicine. Creating the Master Race”. The exhibition is to be displayed in five different South African cities, accompanied by guided visits and workshops. On 19 February 2018, the exhibition was inaugurated at the Cape Town Holocaust and Genocide Centre.

Why is it important to teach about the Holocaust in South Africa?

Our South African Constitution is based in part on the Universal Declaration of Human Rights. Yet when this Declaration was adopted in 1948 in direct response to the atrocities committed by the Nazi regime, South Africa abstained. This was because the South African government was already planning to formally legalize the Apartheid system. In South Africa, many racial laws had already been implemented prior to 1948. But the main pillar of Apartheid, the Population Registration Act No. 30, passed into law in July 1950.  Following this Act, people were registered from birth as member of one of four “racial groups”.

The Apartheid past is still very raw in our country. We find that studying Nazi Germany and looking at the human rights abuses that took place enables students to access their own dark history through the lens of the Holocaust. We also hope that learning about this period in history helps students to be more aware of the dangers of prejudices, stereotyping, of anti-Semitism and of all forms of racism that still beset our country today.

How is the Holocaust addressed in the South African national curriculum?

In our curriculum, we have two sections that specifically address the history of Nazi Germany, although in two very different ways. In 9th grade, when learners are about 14 years old, they study the failure of the Weimar Republic, the rise of Nazi Germany and the outbreak of the Second World War as part of their social science class. In total, the curriculum devotes about 15 hours of teaching time to this part of history.

In 11th grade, South African learners can choose history as an elective. These classes cover pseudo-scientific concepts of race and eugenics, based on the historical examples of Nazi Germany and the indigenous peoples of Australia. This is why the “Deadly Medicine” exhibition that we are currently displaying in five South African cities is so pertinent to our learners. This is exactly what they are learning about!

How do you integrate the exhibition into your work with students and adult groups?

The Director of the Cape Town Holocaust Centre, Richard Freedman, who is also the Director of the Holocaust and Genocide Foundation, had been working for a long time to bring this wonderful exhibition to South Africa. When it became a reality, my colleague Arlene Sher and I went to Washington, DC to attend the International Conference on Education and the Holocaust (ICEH) in December 2017. We received great support from the USHMM on how to use the exhibition. Dr. William Meineke, historian at the Museum, came to the inauguration of the exhibition, which was invaluable for our educators.  The support from USHMM and UNESCO, has allowed us to display the traveling exhibition in five South African cities: Cape Town, Stellenbosch, Johannesburg, Pretoria and Durban. We are also working together with the Namibian participants of the 2017 ICEH to bring the exhibition to Namibia in February 2019.

In each location, we have school classes and educators visiting the exhibition. When we first launched the exhibition in February in Cape Town, learners self-guided through the exhibition using worksheets. However, we soon discovered that students were easily overwhelmed by the density of information. This is why we now start school visits with an introductory class on “race theory” and eugenics, followed by a guided tour of the exhibition.  Based on these experiences, we have shared our experiences with our colleagues at the Johannesburg and Durban Holocaust Centres, so they are prepared to facilitate their own workshops and guided visits, once the exhibition is moved there. We hope to do the same with our Namibian colleagues.

In addition to the school group visits, we also run workshops with diverse adult groups, including educators, teachers in training, law students, medical students and advanced psychiatric nurses. With each of these groups we focus on a different aspect of the exhibition. We cover for example how laws were used to institutionalize the Nazi regime’s racial ideology or how nurses participated in the mistreatment of patients with disabilities. We engage the workshop participants via case studies and discussions of broader ethical questions- from not only a historical perspective, but also ethical questions that they are facing in their work and life today.

Could you give an example of how you link the Nazi regime’s “science of race” to the history of Apartheid in South Africa?

There are actually very close historical links. A few years ago, a box was discovered in a cupboard at the University of Stellenbosch. In the box were artefacts; an eye color table belonging to Dr. Rudolph Martin, which the university acquired in 1924, and a hair color and texture table belonging to Eugen Fischer, an anthropologist and doctor, who had dedicated his research to serve the Nazi’s racial ideology. These were original artifacts that were used in South Africa to measure and to categorize people into so-called “racial groups”. So we could say that Nazi eugenics and racial ideology were the bedrock of the racial system here in South Africa.

These artifacts were added to the “Deadly Medicine” traveling exhibition alongside excerpts from a doctoral thesis, which reveals how, why and where these instruments were used – among others in the town of Stellenbosch. With the permission of the USHMM, an additional panel was developed by the SAHGF in conjunction with the University of Stellenbosch to demonstrate the impact of the pseudo-science of race in the South African context.

What impact has the exhibition on those who visit it and attend your workshops?

Many of the children, who visit the exhibition, are amazed to discover that there is racism somewhere else in the world. For them, the topic of “racism” is solely linked to South Africa and the horrifying racial injustices that were committed during Apartheid. Through the exhibition, they understand that racism neither started nor ended in South Africa. It gives them a sense of “not being the only ones.”

We have seen a similar impact through our workshops. For many participants, they are quite eye-opening experiences. One of the psychiatric nurses said: “I always thought wars are about guns, and machines, and soldiers. I was not aware that professional, educated people could be used as part of a political government for propaganda and to eliminate innocent and vulnerable people.”

It is amazing to see how our visitors realize how learning about the past goes beyond studying history. They see that there is a link between the history of Nazi Germany and South Africa’s past, and even a link to the contemporary. The feedback that we receive shows clearly that establishing these links is very important.

How has your ICEH follow-up project affected your work?

Working with the “Deadly Medicine” exhibition opened new ways of how we teach this part of history. It has given us more knowledge and information and offered us a much broader approach to teaching about the Holocaust. We will continue with our work, hopefully making it constantly better, more relevant and especially more accessible to as many people as possible.

The exhibition allowed us to broaden significantly the scope of our work. When we were in Stellenbosch, we were able to invite schools that would otherwise not been able to visit our Centres or permanent exhibitions. Many learners were exposed to the history of Nazi Germany for the first time. Some of them had never set foot in a museum before. In Stellenbosch, we made contact to many teachers from schools in remote areas. We have organized another educator workshop at the Centre in Cape Town in July that we hope will be attended by many of these teachers.  All of this is possible, because we were able to bring the exhibition to them, thanks to UNESCOs and the USHMMs help!

The support we have received also helped us to continue our programs in the Centre in Cape Town, while running the traveling exhibition simultaneously. We would not have had the capacity to do this otherwise. We are very grateful for that.