Manon Van Hoorebeke: a Digital Girl on a mission at Mobile Learning Week 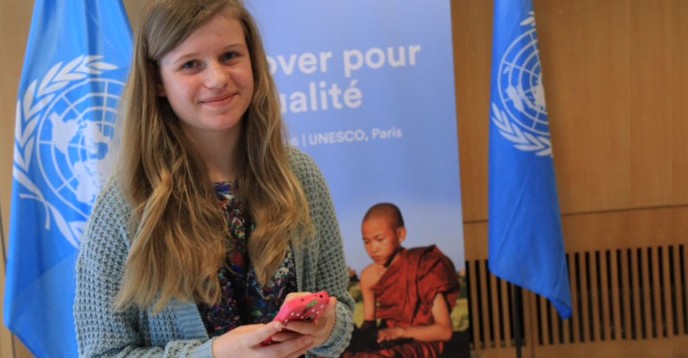 Manon Van Hoorebeke, 12, has two dreams; to get more girls interested in technology and get more technology taught in schools.

Manon, from Belgium, who was named European Digital Girl of the Year in 2014, took part in UNESCO’s flagship ICT in education event Mobile Learning Week as part of a panel discussing Improving Pedagogy and the relevance of learning on 10 March, 2016.

In an interview after the event Manon spoke about how she first learned to code at the age of seven and how now she wants to get more girls to understand the huge and creative possibilities of technology.

Her interest began when she went along to a free learning club, CoderDojo in Belgium, part of a global movement of volunteer-led programming clubs for young people aged 7 to 17.

“I really liked it because it was fun, you could do your own stuff, it wasn’t like school or studying and it was really creative. At the end you could say ‘this is something I made for myself,’” she said.

She began using the programme Scratch and was soon able to design her own games which she describes as “a bit like Pacman and Mario Brothers.”

She noticed, though, that there were far fewer girls than boys in the club and later, when she presented her coding skills at school, girls were interested but reluctant.

“If you say ‘technology’ to girls often they say it’s only for boys or it’s only about war games but it’s not only that. It’s really creative so whatever you are interested in you can use coding. If you like shoes maybe you can design shoes with lights in or you can design clothes,” she said.

Digital Girl of the Year

She decided she wanted to help more girls become interested and began to coach at the club using the programme Arduino to coach other children and particularly girls.

Since then her work has been recognised by the Digital Girl of the Year award and she has also taken part in the Girls in Tech event in Paris in 2015, has spoken at the European Parliament and delivered a Ted Talk in Ghent. She talks about her life and experiences on her blog Better be a digital girl.

She would also like to see more teaching of technology in schools. “At my school the teacher only has one computer and we don’t really get much time to use it,” she said. “I can learn something so much quicker and better if I can do it myself.”

Her next project is to open her own “hackerspace”, a place where girls can go and learn about the variety of ways in which technology can be used and about the interesting career paths it can open up.

And she is thinking about designing her own dream app so that girls could instantly access information about technology in a friendly and supportive way.

When asked what UNESCO could do to help more girls become involved with science and technology she says: “UNESCO is all over the world. You just have to make sure girls know about technology and how to get into it from a very young age. They need to learn it at school from the very beginning.”