Literacy, the royal road to development in Mali 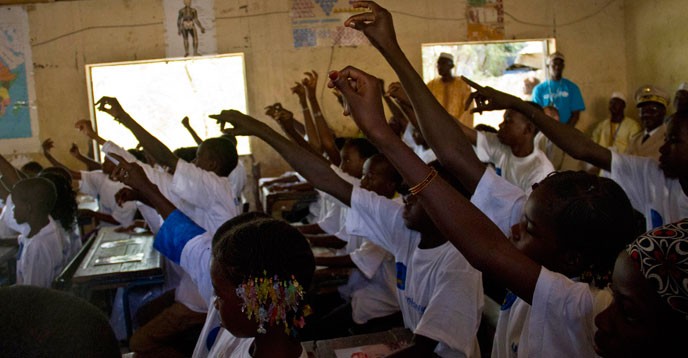 Literacy, the royal road to development in Mali
© UNESCO

On the occasion of the celebration of International Literacy Day, September 8th 2014, a ceremony that brought together political leaders, NGOs and civil society organizations was held in Bamako, Mali, around the national theme “literacy, an essential step towards achieving long-term peace”.

Organized under the presidency of the First Lady of Mali, Mrs. Keïta Aminata Maïga, and attended by the Minister of National Education, the ceremony’s aim was to reaffirm among other things, the commitment of the Malian government towards literacy, non-formal education and the promotion of national languages, for lasting peace and socio-economic development.

A central theme to the growth of communities

“If the international theme for this year is Literacy and Sustainable Development, it is precisely to remind the international community that literacy is one of the key elements required to promote sustainable development, because it provides individuals with the tools to making the right decisions in the areas of economic growth, social development and environmental integration”, said Mr. Lazare Eloundou, UNESCO Representative for Mali, in reference to the message of the Director-General of UNESCO, Mrs. Irina Bokova.

“Devoting a day to the celebration of literacy, the royal road that gives one the possibility to acquire the “know-how-to-be”, the know-how and better yet the knowledge is an opportunity for the global community to measure the results of all the efforts made for the fight against ignorance and obscurantism in our communities”, mentioned the Head of Cabinet and Representative of the First Lady of Mali, Mrs. Sidibé Adama Traoré, in her speech. She also stressed the importance to create a constructive framework for dialogue and questioning around the promotion of literacy, both at the local and international levels.

Literacy, a key program for the Malian government

“In recent years, our country has been faced with socio-economic and security troubles which represent a major concern for all Malians. Solving these issues necessarily requires education in general and literacy in particular because there are around 68% of illiterate people in Mali, without whom all major social projects are often designed, discussed and adopted”, has in turn added Mrs. Togola Jacqueline Nana, the Malian Minister of National Education.

Despite advances in the field, Mali is still, according to UNESCO figures, one of the countries where literacy rate is under 50%. It is for this reason that the Malian government has designed, in collaboration with its technical and financial partners, a strong program for literacy and the promotion of national languages that will hence be at the heart of development initiatives in the coming years.

The ceremony was also marked by the awarding of multiples prizes to the winners of the National Language Competition as well as the handing out of the CIWARA to the Swiss Cooperation for their work in the field of non-formal education.

In addition, the celebration of this day will be followed by cultural and artistic animations, which will take place all over the country, such as sketches, thematic debates, radio and television messages. These activities will end on September 14 in Ourikila, in the Sikasso region.