"Let’s get our creative ideas flowing!" - new post on the ESD Prize Blog from Namibia 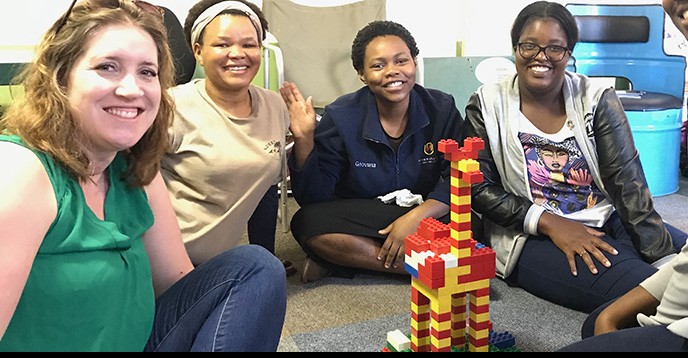 A new post has just been published on the ESD Prize Blog by Viktoria Keding, Director of the Namib Desert Environmental Education Trust (NaDEET), which won the UNESCO-Japan Prize on Education for Sustainable Development (ESD) in 2018. She talks about how NaDEET has started into the new year, and how the award money from the UNESCO-Japan Prize is benefiting NaDEET's work:

"I love January in Namibia. It is the height of summer. Usually we have had some rain and everyone is back refreshed after a bit of a summer holiday.

In addition to all of our returning staff and post-graduate interns, we also welcome three nature conservation interns. Due to the additional funds from the prize money, we have increased the number of interns and staff by about 30%. Enough staff is always one of our biggest problems so it is fantastic to start the year with many new enthusiastic faces.

We decided to start off the year with a staff orientation day including some team building games. One of the challenges was to build an animal out of Legos. This group exceled in the task and even made sure that their giraffe had food and water. Lots of laughter was shared as other groups struggled to get their animals such as ostriches to even stand.

Half the team is now at NaDEET Centre on NamibRand Nature Reserve gearing up for the first group to arrive in February. We will be welcoming a group of 20 lower primary school teachers for an ESD workshop and translation of ESD materials into mother tongue. The other half of the team is at the coast working around the clock to get the Urban Sustainability Centre ready so we can officially open our doors."