The power of youth and of communities in bringing out real and sustainable environmental change was the theme of an event organized at UNESCO Headquarters on 15 November, during the 40th UNESCO General Conference, at which three outstanding and innovative projects from Botswana, Brazil and Germany received the 2019 UNESCO-Japan Prize on Education for Sustainable Development (ESD). The event also featured a panel debate with youth leaders telling their own inspiring stories in relation to ESD and climate action.

Opening the event, UNESCO Director-General Audrey Azoulay said: “To transform the world, one first has to understand. Education for Sustainable Development has hence a crucial role to play and holds an enormous power: to change behaviours profoundly and sustainably.”

Presenting the Prize, H.E. Michiko Ueno, State Minister of Education, Culture, Sports, Science and Technology, Japan, affirmed: “ESD is a key enabler of all the Sustainable Development Goals, and multi-stakeholder cooperation is vital for this. The common thread among the three prize-winners this year is that they aim at engaging diverse stakeholders and at building a sustainable society that incorporates a balanced view of the environment, society, and economy.”

This was the fifth edition of the Prize, funded by the Government of Japan and created in 2014 to honour outstanding projects and programmes in the field of ESD. The three laureates for 2019 are: the Camphill Community Trust in Botswana which practices inclusive education in a sustainable way; the Brazil-based Sustainable Amazon Foundation (FAS) which promotes environmental sustainability for the Amazon by training remote communities across the region; and the German city of Hamburg which has adopted a city-wide approach to ESD featuring a variety of projects. They were represented by their directors and staff at the ceremony, who each received a diploma, an award and a cheque for US$50,000.

Accepting the award, Mr Virgilio Viana, General Director of FAS, said: “We use a people-centred methodology. By engaging communities in education and learning processes, local people have become more empowered as guardians of the rainforest. We would like to invite you all to support us protect the Amazon and take care of indigenous peoples and traditional populations.” Mr David Moatshe of Camphill also invited the audience to support the trust in their work to create more inclusive and sustainable learning environments and opportunities. Representing the Ministry of Environment and Energy of Hamburg, Mr Ralf Behrens said: “Sustainable development for us is the promise for a better world - the UN Agenda 2030 is our benchmark and challenge to move boundaries. For the city of Hamburg, the UNESCO-Japan Prize is both challenge and commitment.”

The panel debate afterwards discussed the role of education, knowledge and youth empowerment in climate action, and showcased how young people are already active for the climate around the world, both inside and outside the classroom, drawing on examples from a variety of UNESCO programmes, such as the UNESCO Associated Schools Network (ASPnet), Biosphere Reserves (MAB) and the International Hydrological Programme. Four inspirational youth leaders from around the world highlighted the crucial role that education and knowledge play in tackling the challenges that climate change brings, as well as the role of young people in creating solutions to address climate change. 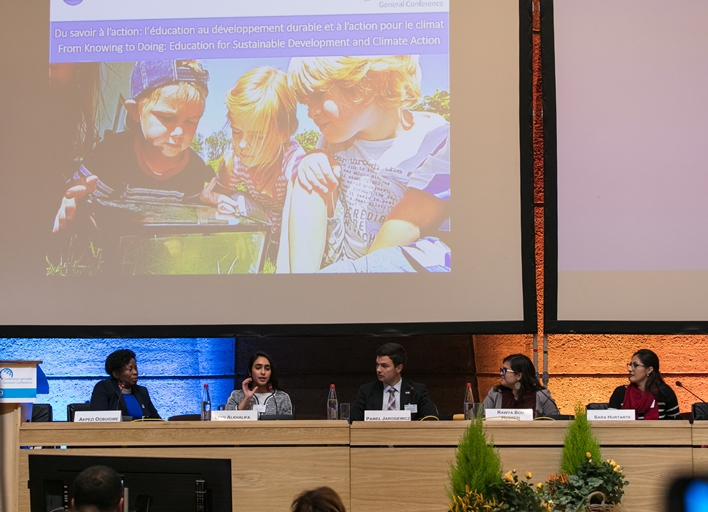 Ms Rawya Bou Hussein, a ‘MAB youth’ from Lebanon active in the Shouf Reserve said: “Biosphere reserves combine natural and social sciences, as well as economics and education. They represent a hub where youth can be effectively engaged.” Ms Leen Alkhalifa, a 17 year-old student at the ASPnet School Ibn Khuldoon in Bahrain explained: 'As an ASPnet student I learn about climate change and what I can do about it but many of my friends at home and in so many other countries don’t. All children should receive Education for Sustainable Development. Policy-makers need to provide this kind of education for their students to solve local and global challenges.” Mr Paweł Jarosiewicz, a PhD student at the UNESCO Chair on Ecohydrology and Applied Ecology, University of Lodz, emphasized the importance of transdisciplinary research as the source of knowledge necessary to enhance the adaptation to Climate Change and pointed out that young people in science can solve existing problems with innovative thinking and engagement.

Director-General Ms Azoulay said: “It is not enough to provide training or raise awareness of environmental education among young people. Young people must be more than mere spectators – they must be actors and help define these initiatives. Without young people, nothing is possible. Only with young people can we shape tomorrow’s world.”

Learn more about the three winners of the 2019 UNESCO-Japan Prize in this brochure as well as this video.