Launch ceremony of the World Water Development Report 2019, Leaving No One Behind 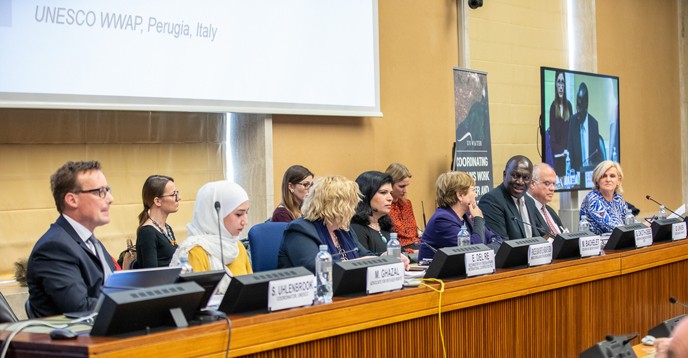 The 10th edition of the United Nations World Water Development Report (WWDR) was launched at the Human Rights Council on 19 March 2019 as the pivotal segment of the World Water Day Celebration. The theme of the WWDR 2019 is ‘Leaving No One Behind’, which reflects the core premise of the 2030 Agenda for Sustainable Development.

The WWDR series are coordinated and produced by UNESCO World Water Assessment Programme (WWAP) in close collaboration with numerous competent UN agencies and prominent institutions under the UN-Water mechanism.

The launch event featured a number of high-level representatives. Mr Olcay Unver, the Vice-Chair of UN-Water made a direct reference to the opening speech of the UN Secretary-General to the Human Rights Council, reminding that ‘human rights agenda is losing ground but we should not lose hope’. As a concrete example, in one generation more than 1 billion people are lifted out of poverty. Safe water and sanitation have the power to lift people out of poverty, bring dignity and education to young people.

Ms Michelle Bachelet, United Nations High Commissioner for Human Rights, underlined that 2 million people die every year due to water related diseases. She reminded the audience that benefits of safe water flow beyond health (in terms of food security, livelihoods and many other key human rights). We must put an end to the world where a few have better, cheaper access to water while many pay for less. Unless we urgently address these inequalities, water will not be a source of life but one of conflict. Her key message was that ‘It is hard to imagine any development priority that speaks more directly and undeniable to fundamental human dignity than SDG6.’

Mr George Okoth-Obbo, Assistant High Commissioner for Operations, Office of the United Nations High Commissioner for Refugees, drew attention to the large amount of refugees and displaced people around the world. He said if the refuges had constituted a country that would be the 25th largest country in earth. The statistics that he provided from the WWDR2019 clearly illustrated that refuges are left behind farthest of all: At the end of 2018, only 25% of the refuges had access to safely managed drinking water located on premises and only 17% for sanitation. This leads to high rates of school drop-out and lots of tension in refugee communities.

HRH Princess Sumaya bint El Hassan of Jordan, UNESCO Special Envoy for Science for Peace underlined that many people are left behind due to a number of factors, putting emphasis on gender aspect:  women and girls worldwide are responsible for 70% of water chores and management, yet their participation in decision-making remains often very limited. Whilst states are recognised as the major responsibility-bearer in ensuring the human rights to access to water and sanitation, the plight of displaced people starkly highlights that ensuring water provision is a collective responsibility for the entire international community.

H.E.Ms Emanuela Del Re, Vice Minister of Foreign Affairs and International Cooperation, Italy, expressed satisfaction over the growth in scope and recognition of the World Water Development Reports.  She stressed that governing water as a source of denied rights, tensions and competitions may well be necessary but managing water as a common ground for peace holds a huge promise.  Her concluding remark was that the search for a new integrated approach on the theme of universal access to water and basic sanitation provides a fundamental governance platform not only to cope with thirst, but also to contribute to the achievement of the whole spectrum of the Sustainable Development Goals and thus to set the condition for a common viable future.

In his content presentation, Mr Stefan Uhlenbrook, WWAP Coordinator, underlined that while access to water and sanitation is internationally recognized human right, more than two billion people lack even the most basic of services. He voiced the concern that if the degradation of the natural environment and the unsustainable pressure on global water resources continue at current rates, 45% of global Gross Domestic Product and 40% of global grain production will be at risk by 2050. In conclusion, Mr Uhlenbrook made it clear that investing in water supply and sanitation makes not only good economic sense but also provides broader benefits such as health, productivity and overall well-being.

The presentation of the report was followed by an interactive and engaging panel discuss that included reflections on the topic from Mr Leo Heller (Special Rapporteur on the Human Rights to Water and Sanitation), Ms Vanessa Godat Fakhry (“Solidarite´ Internationale Eau”, City of Lausanne) and Mr Loïc Voisin (Senior Executive Vice President, Suez).