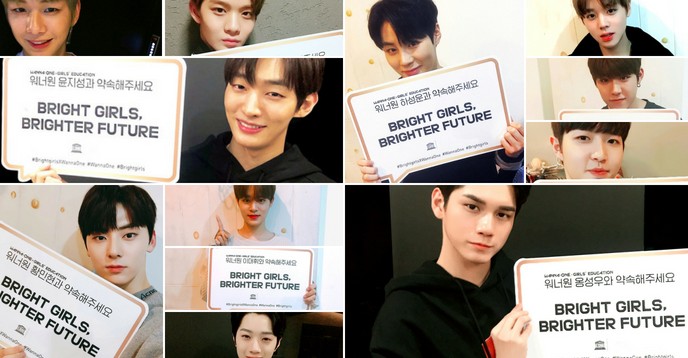 From 11 to 31 March 2018, Wanna One, a popular K-POP idol group in South Korea and Asia, encouraged its fans to participate in the UNESCO-CJ Strategic Partnership for Girls’ Education. The idol group was the finalist of an audition programme aired on the MNET music channel, which is owned by CJ Entertainment and Media, part of the CJ Group. After the release of their album entitled “I Promise You” in March 2018, Wanna One announced their participation in the “Bright Girls, Brighter Future” global education campaign launched by UNESCO and CJ Group in 2014.

At the heart of the campaign is the reality that 130 million girls around the world still do not have access to basic education and live without the opportunity to dream of a quality education. To raise awareness on this issue, Wanna One engaged with their fans by sharing messages of support in favor of girls’ education and improved learning environments. They also promoted the importance of increasing the agency of girls. Wanna One donated approximately $100,000 to support UNESCO’s work in promoting and improving girls’ education.

Wanna One's message spread quickly through social media platforms via the hashtag #Brightgirlsxwannaone and reached millions of individuals. Wanna One’s campaign video recorded over 1 million views with a high engagement counting over 3 million likes and comments garnered in just one month. Fans learned about the importance of the girls’ education campaign through Wanna One’s messages, and pledged continuous interest and support to the campaign.

Messages shared by fans in response to the campaign included: “I do really appreciate UNESCO girls’ education campaign with Wanna One because with a quality education a woman has the power to transform societies”, or “I promise to join Wanna One X UNESCO Girls’ Education Campaign. I promise to support girls’ education rights around the world. I promise to fight for gender equality. No one should be left out of education because of their gender”. In addition, some of the fans voluntarily raised funds and made donations to show their support to the campaign.

CJ Group commended Wanna One's girls’ education campaign, “it is very meaningful that future generations can communicate with their idols through cultural content and become interested in social issues.”

UNESCO and CJ Group launched the “Bright Girls, Brighter Future” global education campaign in 2014, as part of UNESCO’s Global Partnership for Girls’ and Women’s Education “Better Life, Better Future”. The campaign helps spread awareness on the importance of girls’ education at K-Culture festivals such as the Korean Convention (KCON) and the MNET Asian Music Awards (MAMA). CJ group is also a major contributor to the UNESCO Malala Fund for Girls’ Right to Education, which expands girls’ access to quality education, especially in countries affected by conflict and disaster.