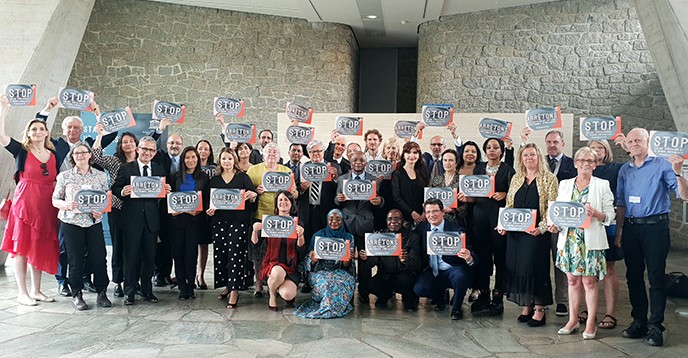 UNESCO and members of the Group of Friends for the Safety of Journalists at UNESCO brought together over 200 Member State representatives, journalists, and legal professionals to discuss the impact of online harassment on women journalists and to explore practical and legal measures to effectively address the issue.

The conference “Standing up against online harassment of women journalists - What works?” took place at UNESCO’s Headquarters on 18 June.

Online harassment is a growing and ubiquitous problem faced by women journalists around the world. Several studies have demonstrated the psychological distress and impact of threats and other acts of intimidation to women journalists’ work, which affects gender equality but also freedom of expression and diversity in the media.

Opening the event, UNESCO’s Assistant Director-General for Communication and Information, Moez Chakchouk, underlined that as the United Nations agency responsible for the UN Plan of Action on the Safety of Journalists, UNESCO is “fully committed to creating an environment that is free and safe for journalists, and notably women journalists, all around the world”. He announced that the Organization is planning to commission a study on effective measures to counter online harassment of women journalists. H.E. Claudia Reinprecht, Austrian Ambassador to UNESCO, cautioned, “we have to understand what happens to our societies when abuse stifles the voices of already underrepresented women who work in media” and called for a “profound analysis” of the issue.

During the event’s first panel, which included first-hand accounts by women journalists who have experienced online harassment, blogger and UN Women Representative of the Netherlands Clarice Gargard explained: “The harassment is about who I am, not what I do.”

This was echoed by the executive producer of Canada’s first indigenous broadcaster, Francine Compton and Nigerian journalist Azizatu Sani, who warned that “harassment impacts on journalistic passion, which is the motivation that gets people into the business”.

As women journalists are increasingly targeted by harassment and intimidation online, all panelists concurred that there is an urgent need to make concerted efforts towards developing solidarity between women journalists, management and male colleagues in the workplace. “An attack on one of us is an attack on all of us”, asserted Tine Johansen, Deputy Chair of the Danish Union of Journalists.

Christophe Israël, Executive Editorial Director of the French daily Libération, launched the second panel by explaining his newspaper’s double-role in exposing online harassment of women and at the same time, discovering the involvement of two of its own male journalists in the scandal. The “Ligue du LOL” affair, which was dubbed France’s #MeToo moment, compelled Libération to reflect on the lack of adequate protection for women journalists in the newsroom. “Until this event, we had no specific mechanisms in place for victims”, Israël said.

Several newspapers in other countries took similar initiatives, as The Guardian’s Director of Editorial and Legal Services, Gill Phillips, explained. Recognizing that the harassment of women journalists online is part of a wider “culture of intimidation”, The Guardian devised guidelines to protect women from abuse and educate management on how to respond to grievances from staff.

In recent years, harassment has increasingly taken place on private messaging services, where it is more difficult to uncover and expose. Judicial systems across the world are adapting to this reality at very different paces, most of them struggling to establish a clear line between what constitutes harassment or freedom of speech, lawyer Martina Kronström revealed. Neide de Oliveira, federal prosecutor from Brazil, referred to the challenges linked to insufficient expertise and training of law enforcement and judicial actors, as well as to the need to enhance mechanisms of international cooperation in this area.

In the face of these developments, users are demanding more accountability from companies like Twitter, where abuse against women journalists is rampant. “Freedom of expression means nothing if people don’t feel safe”, assured Audrey Herblin-Stoop, Twitter’s Head of Public Policy in France and Russia. With 500 million tweets being posted every day, she acknowledged the responsibility but also the challenges in ensuring that the tool is not misused for harassment or intimidation. She also cautioned participants not to separate online and offline violence by saying “stop using the term in real life (IRL), the online space is real life”.

Nighat Dad, Executive Director of the Digital Rights Foundation in Pakistan, reminded participants and Member States that all legislation regarding the online space, including legislation to protect women journalists, should have human rights at its center.

The conference was organized by UNESCO’s CI Sector together with Member States from across all regions and the financial support of Austria, Canada, Denmark, the Netherlands, Lithuania, Sweden, and the United Kingdom as well as the global network of press freedom NGOS, IFEX.

#JournalistsToo - UNESCO stands up against online harassment of women journalists

Standing up against online harassment of women journalists | INTERVIEW HIGHLIGHTS

How The Guardian stands up against online harassment of women journalists