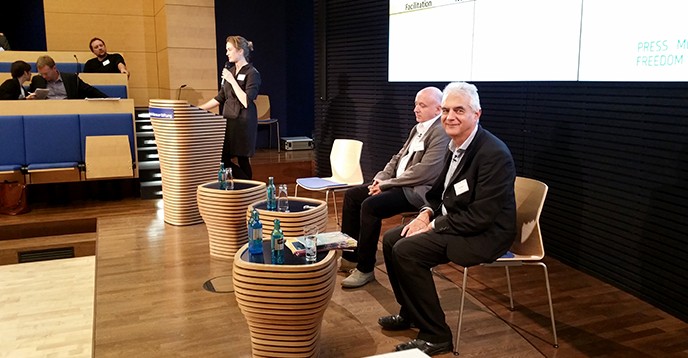 While there are new opportunities to shine a spotlight on harms to the public interest, there are also new threats in digital times, according to a recent panel discussion where two UNESCO reports were referenced.

These insights emerged at the annual conference of the Forum Media and Development (FoME) in Berlin, Germany, on November 16-17.

Discussion focused on the importance of securing confidentiality when journalists co-operate with sources to see the whistle blown on issues like corruption, tax evasion, mismanagement of public funds, threats to public health, and abuse of personal data.

Guy Berger, UNESCO’s Director for Freedom of Expression and Media Development, highlighted positive developments featured in the World Trends in Freedom of Expression and Media Development. These were that by 2015, at least 60 States had adopted some form of whistle-blower protection; and 179 have now signed the UN convention against corruption which also urges such protection.

Referring to the UNESCO study “Protecting journalism sources in the digital age”, he added that more than 100 countries had some form of legal protection for confidentiality of sources.

He cited UNESCO decisions from 2013 and 2014, which recognised that privacy for sources of journalism benefited societies, good governance and the rule of law, and should not be interfered with arbitrarily.

The study findings were that laws were becoming outdated, and eroded by national security law overrides. Surveillance regimes and data protection regimes also threaten source protection in the digital age.

“Journalists should not do business as usual, but adapt their practices in order to shield their sources,” said Berger.

At the same time, they also needed to advocate for laws and rules that provided adequate protection, he added.

Fellow speaker on the panel, Vladimir Radomirovic, editor-in-chief of Pistaljka.rs spoke about the importance for the public to be made aware of the value of whistle-blowing to society, and described how his website coverage of cases of corruption and bureaucratic malfunction had led to change.