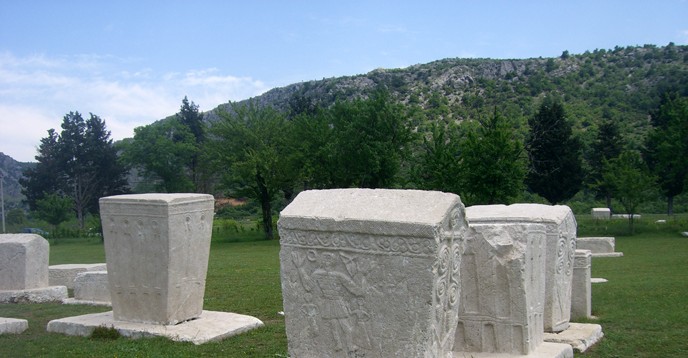 The meeting for the finalization of the transnational nomination of Stećci for inscription on the World Heritage List was held in Sarajevo, Bosnia and Herzegovina on 8 April 2014.The working group of representatives from Bosnia and Herzegovina, Croatia, Montenegro and Serbia gathered at the United Nations House in Sarajevo, to shape an agreement for the joint submission of the nomination file of Stećci - Medieval Tombstones property for inscription on the World Heritage List of UNESCO.


Cultural property, Stećci - Medieval Tombstones, was submitted for inscription on the World Heritage List in April 2011. Stećci or Stećaks are monolithic tombstones found on the entire territory of Bosnia and Herzegovina, as well as in parts of Serbia, Montenegro and Croatia.

Available data suggest that Stećci first appeared in the second half of the 12th century, with the first phase lasting throughout the 13th century. A period of the most intensive production and decoration were the 14th and 15th centuries. In the 16th century their use completely ceased. Out of 70,000 odd tombstones recorded at 3,300 odd sites, about 60,000 monuments are located in Bosnia and Herzegovina, 4,400 in Croatia, 3,500 in Montenegro and 4,100 in Serbia. Stećci fall into two main groups: recumbent and upright stone monoliths. Most tombstones are recumbent monoliths, which come in three types: slab, chest and gabled (sarcophagus-like).  Upright stone monoliths come in the following types: stela, pillar (obelisk), cruciform and nišan.

The process of nomination of these tombstones started in Sarajevo in November 2009, at the initiative of the representatives of Bosnia and Herzegovina, Croatia, Montenegro and Serbia who signed a letter of intent for a joint nomination for inclusion of Stećci - Medieval Tombstones in the World Heritage List. The nomination has scheduled an enrolment of 30 necropolises with tombstones – of which 22 from Bosnia and Herzegovina, 2 from Croatia, 3 from Montenegro and, 3 from Serbia.

"Today, four and a half years after the launch of the project, we can say that the nomination file is complete and that next year it will be submitted to the UNESCO World Heritage Centre" said Sinisa Sesum, Head of the Antenna in Sarajevo, UNESCO Regional Bureau for Science and Culture in Europe, Venice (Italy). “The next step”, he noted, “will be to deliver the nomination file to Irina Bokova, Director-General of UNESCO, at the Annual Meeting of Ministers of Culture of South-East Europe (SEE) which will be held on 27-28 June 2014 in Skopje, The former Yugoslav Republic of Macedonia”.

“During the International Symposium dedicated to Sefik Beslagic (the most prominent researcher of medieval tombstones - Stećci) and his work on tombstones to be held in May, we will try to shed light on some unanswered questions. “ said Dubravko Lovrenovic. He underlined that the medieval tombstones are of outstanding universal value and they merit inclusion on the World Heritage List. He finally declared that, despite all the difficulties encountered along the way, the nomination file is a very high quality document generated for evaluation by the Advisory Bodies mandated by the World Heritage Convention; it is an exhaustive file that shows the historic importance of these medieval tombstones.