Jim Boumelha: our task is to build the widest coalition for safety of journalists 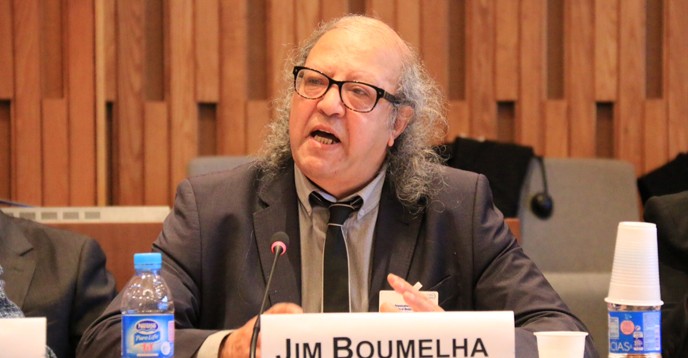 No fewer than around 2,300 journalists and media professionals have died in the last 25 years, according to the 25th report on journalists and media staff killed since 1990, released on 3 February 2016, by the International Federation of Journalists (IFJ). More than 95 percent of the victims died in their own country. “They are our friends and colleagues, and we don’t just remember them and pay our respect, but we also protest relentlessly” declared today at UNESCO Jim Boumelha, president of the IFJ. This crisis “cannot be solved by journalists alone,” he said, calling for a more coherent engagement on the part of media owners, publishers, editors and international institutions.

In starting I must borrow again one of the best quips on the killing of journalists from Harrod Evans of the Times. He said “The price of truth has gone up grievously”. This really encapsulates today our grim ordeal where every week we pay with the life of a reporter, a cameraman, a support worker. Unless the life is that of a well-known Western correspondent, the world barely notices.

Today, more and more journalists are being targeted with impunity in every corner of the globe, brutalised, gunned down and done to death by the enemies of press freedom.

As a global organisation, the International Federation of Journalists (IFJ) was the first to monitor the killings of journalists and media staff which we started some 25 years ago. Yesterday we released our report “25 years of contribution towards safer journalism” and the first shocking thing about this report is to learn just how many are dying. This is not new. If we aggregate all the statistics we found that no fewer than around 2700 have died in the last 25 years. This comes to about two journalists or media workers dying every week. At the time we started counting in 1990, we listed 40 journalists and media workers killed in that year.

The second shocking thing is to learn how many of the murdered are local beat reporters whose names do not resonate in the media. These are different from by-lined war correspondents, who knowingly risk their lives, sometimes mistaken for combatants, get fatally caught in the crossfire, or walk on a landmine. We know that every conflict claims its press victims – the invasion of Iraq triggered the killing of over 350 journalists.

For all these 25 years it has almost become a fact of life that the slaughter continues year in year out. But the loss of media lives on the scale seen in the last few years is hard to bear. And all the reports make grim readings when we are confronted by the scandal of impunity and the failures of governments to bring the killers to justice. In fact it is easy to draw the conclusion that the cause is hopeless.

As direct representative of journalists, we are also responsible for their safety; these killed journalists are our friends and colleagues who have dedicated their lives to and paid the ultimate price for their work as journalists.

We don’t just remember them and pay our respect but we also protest relentlessly, expose the shameful failure of governments to properly investigate and prosecute the killers and we lead the fight for justice. In their names we also do more every day to find ways of making journalism safer.

Few of them were high-profile foreign correspondents that fit the exotic and romantic image of journalism. More than 95 percent of the victims died in their own country.

There is no doubt that the world is now a more dangerous place for journalists, but not necessarily in ways that people might expect. The risks to foreign journalists (hardly limited to Western correspondents), have risen dramatically. Some of us are old enough to recall a time back in the 80s when raising a white flag and writing TV in masking tape on a vehicle might help keep one safe. These days have gone.

The untold story, however, is that the risk to local journalists, or journalists who report within the borders of their own nation, have never been greater. In fact, nearly three out of four journalists killed around the world did not step on a landmine, or get shot in crossfire, or even die in a suicide bombing attack. Instead, no less than 75 percent were murdered outright, such as killed by a gunman escaping on the back of a motorcycle, shot or stabbed to death near their home or office, or found dead after having been abducted and tortured.

The killing of local journalists is most common as nearly nine out of ten journalists were killed on the job. Many people have heard of the Russian investigative journalist Anna Politkovskaya, who, was shot to death in the lift of her apartment. But how many people outside of the Sindhi-speaking area of Pakistan have heard of Ghulam Rasool Birhamani, a middle-aged reporter for the Daily Sindhu Hyderabad, who was abducted, tortured and left for dead after reporting on an arranged, tribal marriage involving a 12-year-old girl?

Or can anybody remember a single name of the 30 journalists killed in one incident during election unrest in the Philippines’s Maguindano province? – the biggest single massacre of journalists.

And we all agree that the single biggest contributing factor to violence against journalists remains impunity.

Impunity occurs when there is the absence political will to back the investigations into the killing of journalists; when the judicial system is weak or corrupt; when the police or investigating authorities are incompetent or given meagre resources.

In no less than 90 percent of journalist murders worldwide, there has been little or no prosecution whatsoever.  In two/third of the cases the killers were not identified at all and probably will never be. This means that it is almost virtually risk-free to kill a journalist – murder has become the easiest, perhaps cheapest and most effective way of silencing troublesome journalists. Occasionally, a triggerman is identified and brought to trial, but in most cases the paymaster goes free.

These murders also have an impact beyond the incidents themselves. They send a signal to countless others that they or members of their family could well be next. This generates a fear that is hard to measure. Self-censorship has become routine almost everywhere.

Among field reporting incidents, we have at times endless arguments trying to unravel disputed shootings and some were difficult cases like the shooting of journalists by the US army at the Palestine Hotel in Baghdad but recent events in Northern Iraq, where James Foley and Bob Sotloff were decapitated at the hands of the Islamic State, or in Paris with the gunning down of journalists at Charlie Hebdo have triggered a complete  new dimension to the killing of journalists. Journalists are now becoming direct pawns in wider geopolitics.

And we know that it has at its disposal dozens of tools and instruments including international humanitarian laws, universal human rights laws, covenants, declarations and resolutions – the Universal Declaration of Human Rights, the Geneva Convention including the Additional Protocol I; Resolution 29 which oblige states to prevent, investigate and punish crimes against journalists; UN Security Council resolution 1738; Seven declaration including the Belgrade and the Medellin declarations.

All these instruments make it clear that journalists, including embedded journalists, are civilians and must therefore be protected as such.  Also they compel governments to abide by international laws and standards. They all commit States to refrain from killings, ill-treatment, unlawful arrest, and other interferences likely to have a chilling effect on all media operators and citizens at large.

Numerous instruments have also been adopted, both at UN and regional level, to reinforce the scope of treaty obligations, some of which address explicitly the issue of impunity. But we know their weakness --  that most are non-binding; and that they operate incrementally. From the range of treaties and other instruments, it is clear that the problem of impunity is well recognised but the major hindrance for the protection of journalists derives not from the scope of the rights but from implementation deficits.

And today's sad reality is that not many journalists can rely on international institutions to defend their rights when they disappear or are jailed or murdered.

A few years ago we were full of hope when the UN Security Council adopted resolution 1736 passed in 2006 which should be binding, stating for the first time that journalists and media professionals engaged in areas of armed conflict shall be respected and protected. But sadly these hopes seem to be getting thinner by the day, as UN officials are often powerless to confront governments.

Violence, of course, is only one way to silence journalists. Outright censorship and imprisonment for individual journalists who persist in crossing red lines is the most common reprisal. We have also seen the number of jailed freelance journalists nearly doubling to make up almost half of incarcerated journalists. Both these trends are likely to grow.

In less established democracies, we see authoritarianism getting more and more entrenched. I can name you dozens of journalists being harassed, attacked, kidnapped or imprisoned. Too many of our colleagues, some of the bravest and the most determined – those who are prepared to sacrifice their personal and professional lives for the public good –  are in jail or in detention.

But this is a crisis that cannot be solved by journalists alone. And this is why gatherings like this are so crucial.

Our task today is to build the widest coalition to ensure these instruments are fought for and implemented.  And I do hope that we don’t fritter away all our energies in disputes as to whether we needed more instruments or another motion.

A more coherent engagement is today called for on the part of media owners, publishers and editors. And the continuing high level of media deaths cries out for more action by international institutions such as the United Nations to force governments to pay more attention to the safety crisis facing journalists and media.

The very fact that a government is sensitive is, of course, the point. IFJ member unions are engaged every day holding states responsible for their negligence and, in many cases, complicity.  Not once a year, but every time they acquiesce or sanction, or turn a blind eye on the murder of a journalist.

This, we will continue to do, day in day out, and we welcome the engagement of anybody to help us bring an end to impunity.

J. Boumelha, is President of the International Federation of Journalists He participated at the conference News organizations standing up for the safety of media professionals, held at UNESCO on 5 February 2016.