Japan pushing ahead with Society 5.0 to overcome chronic social challenges 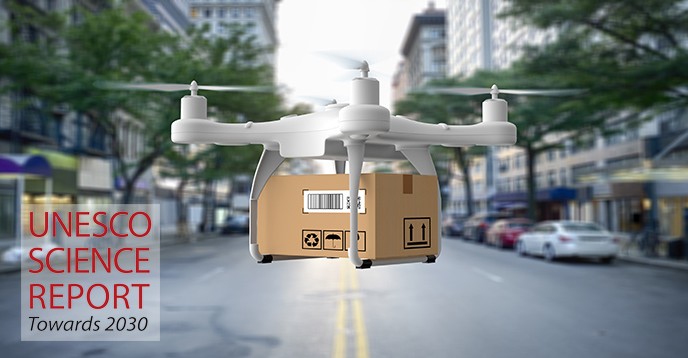 Japan’s new blueprint for a super-smart society, Society 5.0, is a more far-reaching concept than the Fourth Industrial Revolution, for it envisions completely transforming the Japanese way of life by blurring the frontier between cyberspace and the physical space. Here, the author of the chapter on Japan in the last UNESCO Science Report (2015), Professor Yasushi Sato from Niigata University, explains why both the government and business leaders have high hopes for this strategy.

At year’s end, Shinzo Abe is expected to become the first Japanese prime minister ever to serve more than eight years in office. During his record-breaking tenure, he has sought to revitalize Japan’s economy by promoting ‘Abenomics’, which consists of ‘three arrows’: monetary easing, fiscal stimulus and a growth strategy.

These arrows were analysed by the UNESCO Science Report: towards 2030 (2015). The first two arrows have helped Japan’s economy to stay afloat but it is the last component that will be all-important in the long run. After the Abe Cabinet issued its first growth strategy in 2013, this was revised every year until 2017, when it was overhauled to include the new concept of ‘Society 5.0’.

The term refers to the idea that Society 5.0 will follow Society 1.0 (hunter-gatherer), Society 2.0 (agricultural), Society 3.0 (industrialized), and Society 4.0 (information). Also called the ‘super-smart society’, Society 5.0 envisions a sustainable, inclusive socio-economic system, powered by digital technologies such as big data analytics, artificial intelligence (AI), the Internet of Things and robotics. The ‘cyberphysical system’, in which cyberspace and the physical space are tightly integrated, becomes a pervasive technological mode supporting Society 5.0. To some, the concept sounded like a lofty vision at first, with no clear prospect of how it would actually unfold. Today, it inspires enthusiasm.

The transition to Society 5.0 is deemed similar to the ‘Fourth Industrial Revolution’, in that both concepts refer to the current fundamental shift of our economic world towards a new paradigm. However, Society 5.0 is a more far-reaching concept, as it envisions a complete transformation of our way of life.

In Society 5.0, any product or service will be optimally delivered to people and tailored to their needs. At the same time, Society 5.0 will help to overcome chronic social challenges such as an ageing population, social polarization, depopulation and constraints related to energy and the environment.

In Society 5.0, autonomous vehicles and drones will bring goods and services to people in depopulated areas. Customers will be able to choose the size, colour and fabric of their clothing online directly from the garment factory before having it delivered by drone. A doctor will be able to consult her patients in the comfort of their own home via a special tablet. While she examines them from a distance, a robot may be vacuuming the carpet. At the nursing home down the road, another robot may be helping to care for the aged. In the nursing home’s kitchen, the refrigerator will be monitoring the condition of stocked foods to cut down on waste. The town will be powered by energy supplied in flexible and decentralized ways to meet the inhabitants’ specific needs. On the outskirts, autonomous tractors will be toiling in the fields while, downtown, advanced cyberphysical systems will be maintaining vital infrastructure and standing by to replace retiring technicians and craftspeople, should there not be enough young people to fill the gap.

Society 5.0 has turned STI policy into a mainstream political agenda

The grand and somewhat nebulous concept of Society 5.0 has gradually become a centerpiece of the Abe Cabinet’s growth strategy – which means that science, technology and innovation (STI) policy has now become a mainstream political agenda. Japan’s regular budget for science and technology, which had remained in stasis over the financial years from 2002 to 2017 at around 3.6 trillion yen (US$33 billion), suddenly shot up to 3.8 trillion yen (US$35 billion) in 2018 then to 4.2 trillion yen (US$38 billion) in 2019. Although this is partly due to technical changes in the way in which the budget is calculated, such a substantial increase would have been inconceivable only a few years ago. Spurred by such a political driving force, Japan’s investment in the development and application of digital technologies, as well as in basic research, has just got a significant boost.

Looking back, it was in 2016 that the concept of Society 5.0 first appeared in the Fifth Science and Technology Basic Plan, a five-year national strategy formulated by the Council for Science, Technology and Innovation (CSTI). The plan incorporated the findings of intensive deliberations by expert committees that had been administered by the Ministry of Education, Culture, Sports, Science and Technology (MEXT) and the Ministry of Economy, Trade and Industry (METI) since 2014. This process led to Society 5.0 being established as a government-wide vision for the future of Japan. Of course, the longevity of the Abe cabinet has also created an environment that is conducive to fine-tuning the government’s vision over time.

Robust support from industry for Society 5.0

At the same time, Society 5.0 has enjoyed robust support from industry. In 2015 and 2016, relevant ministers and business leaders met several times to discuss the direction that Japan should take. Just a few months after CSTI published the Fifth Science and Technology Basic Plan, the Japan Business Federation (Keidanren), which groups the nation’s biggest corporations, published its own policy proposal for Society 5.0. A close relationship developed between the government and industry, particularly with Keidanren, giving Society 5.0 the momentum to move forward at a fast pace.

Government–industry collaboration has extended to a wide range of fields. Under the Growth Strategy Council – Investing for the Future, which is composed of ministers, company CEOs and academicians, Industry–Government Committees have been established for five key themes: (1) next-generation mobility/smart city, (2) smart public services, (3) next-generation infrastructure, (4) FinTech (financial technology)/cashless society, and (5) next-generation healthcare. These committees are made up of business representatives and divisional directors from ministries.

Within this structure, visions and strategies for deploying digital technologies are discussed, as are challenges with regard to human resources, regulatory reform, open data and cybersecurity. The Council has also begun discussing the need for legislation to regulate the digital data market. This ties in with Prime Minister Shinzo Abe’s announcement at the World Economic Forum in Davos last January that Japan would be using its chairmanship of the Group of 20 nations (G20) Summit on 28–29 June 2019 to promote the idea of expanding World Trade Organization rules beyond goods and services to encompass trade in data, as well. He said he would ‘like Osaka G20 to be remembered as a summit that started worldwide data governance’.

Japan’s Artificial Intelligence Technology Strategy is a key pillar of Society 5.0. It characterizes AI as a service and foresees three phases for AI development and use: (1) expanding use of data-driven AI in each service domain, (2) general use of AI and data across services, and (3) the formation of ecosystems through a complex merger of these services. The Artificial Intelligence Technology Strategy applies this framework to three priority areas of Society 5.0, namely health, mobility and productivity.

The strategy was published in March 2017 – thereby becoming only the second national strategy for AI, after that of Canada – by the Council for Artificial Intelligence Technology Strategy, which had been set up by CSTI in April 2016 to develop a roadmap for the industrialization of artificial intelligence. The council was comprised of presidents of universities and national research corporations, as well as business moguls like the former Chairman of Toyota.

More recently, CSTI has been deliberating on ethical principles related to research, development and use of AI. It will be putting the final touches to its Principles of a Human-centric AI Society in March this year.

More recently, Society 5.0 took on a new significance. Both the Abe Cabinet’s growth strategy and Keidanren’s own policy proposals expect Society 5.0 to make a major contribution to the Sustainable Development Goals (SDGs).

As Society 5.0 is geared towards addressing societal challenges and realizing a sustainable, inclusive, human-centered society, the Japanese government and Keidanren deduce from this that Society 5.0 and the Sustainable Development Goals (SDGs) are pointing in the same direction.

Keidanren even revised its Charter of Corporate Behavior in November 2017, calling for its member corporations to ‘proactively deliver on the SDGs through the realization of Society 5.0’.

Why is Japanese society committed to Society 5.0?

Japan as a whole seems to be increasingly committed to the vision of Society 5.0. Why? Behind the growing zeal for Society 5.0, there appears to be an ardent wish on the part of the Japanese government and business community to seize this golden opportunity to reverse lingering adverse trends. The economy grew by less than 2% in 2017 for the sixth year in a row. As recalled by the UNESCO Science Report (2015), Japan has experienced prolonged economic stagnation since the 1990s, owing to a combination of factors: ever-intensifying global competition, the changing structure of value creation in the new digital economy, depopulation and ageing, and growing fiscal pressure from rising government expenditure on social security.

Japan might be able to overcome such disadvantages by pursuing Society 5.0. Even though Japan has not been much of a leading light in digital industries so far, the nation may be able to take advantage of its traditional strengths in mechanical and material engineering to develop advanced cyberphysical systems. By actively introducing AI into the workplace, depopulation and ageing might cease to be disadvantages – or even become advantages – in a less labour-intensive economy.

Japan is facing some tough problems but the government and business leaders see the concept of Society 5.0 as being a way to overcome these. They reason that Japan might then be in a position to share its own experience with the rest of the world, given that other countries may encounter similar problems sooner or later. Already, Japan is not the only high-income country facing an ageing population and sluggish demographic growth, while struggling to compete in the new digital economy.

Science for a Sustainable Future, Investing in Science, Technology and Innovation, Building Capacity in Science and Engineering
Japan