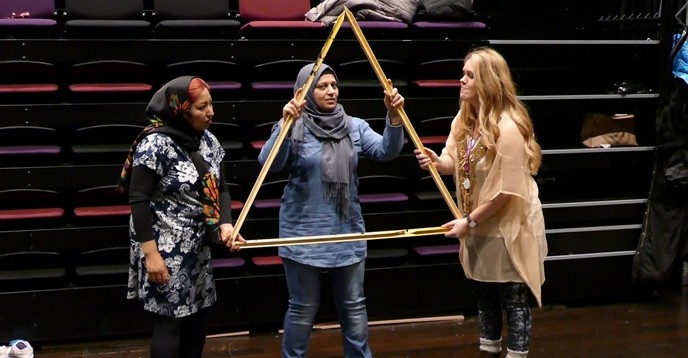 Nuovo Comitato il Nobel per i Disabili in Italy has won the 2019 UNESCO Confucius Prize for Literacy for its programme ‘Tell Me’.

Nuovo Comitato il Nobel per i Disabili (New Nobel Committee for People with Disabilities) is an italian non-profit organization created by Nobel laureate, Mr Dario Fo, in 1997 to support disadvantaged groups through education, with particular regard to disabled people.

In 2016, the committee decided to focus its efforts on the migrant population and launched the programme ‘Tell Me’, an acronym for ‘Theatre for Education and Literacy Learning of Migrants in Europe’.

Italy is one of the first countries impacted by migration. The programme aims to contribute to social inclusion of youth and adult migrants, with the priority to learn the language of the host country.

“In the wake of a period of raised awareness about the issue of migration, but not solely for that reason, the potential that theatre has to contribute to social inclusion of those whom we like to refer to as new European citizens, seemed evident and indisputable on many levels”, says Nazzareno Vasapollo, the project manager of the Tell Me project.

“The difficulty of mastering a language is among the most important causes of material, social and psychological insecurities that a “foreigner” experiences in the integration process in any country”, says Nazzareno Vasapollo.

Today the programme is operating in Italy, Portugal, Spain, and Turkey, where it has benefited over a hundred migrants since 2018, many of whom are out-of-school youth.

A message about solidarity and a mutual encounter

The project moves in three stages, between art, language learning and social inclusion. The theatre is a tool to exchange knowledge and bridge the gap between cultures to facilitate the integration of migrants.

The methodology, aligned with the national and European educational frameworks and developed with partners across the field of education and theatre, revolves around storytelling, as a way to gradually transition from the learner’s mother language to the host country’s language.

72 teachers have been trained through workshops so far. Teachers also benefit from an e-learning platform and an online material repository where curriculum documents, methodological guidelines and other materials are available in English, Italian, Portuguese, Swedish and Turkish.

For International Literacy Day, Nazzareno Vasapollo wants to address a message to migrants who were forced to go outside of their countries.

“The founding fathers thought of a Europe based on the values of solidarity and that no one would be able to defeat them if they are carried out by its citizens, its organizations and its institutions of good will.”

The organization intends to carry out the project across Europe, which the recognition of the prize will help with.