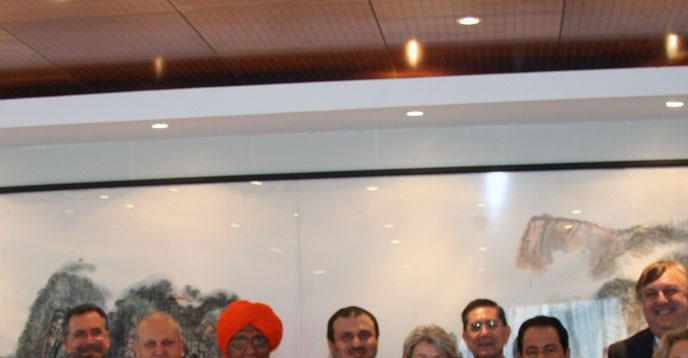 On 22 January, the Director-General of UNESCO, Irina Bokova, welcomed the Board of Directors of the King Abdullah Bin Abdulaziz International Centre for Interreligious and Intercultural Dialogue (KAICIID) to UNESCO Headquarters.

Ambassador Mohamed Sameh Amr, Chair of the UNESCO Executive Board and Permanent Delegate of Egypt to UNESCO and Ambassador Ziad Aldrees, Permanent Delegate of Saudi Arabia to UNESCO participated in the meeting, to which were also invited Marie-Stella Boussemart, President of the Buddhist Union of France, Anouar Kbibech, Vice-President of the French Counsel of the Muslim Faith, François Clavairoly, President of the Protestant Federation of France, Nicolas Kazarian, and Metropolitan Joseph from the Orthodox Patriarchate of Romania.

In the meeting, Irina Bokova highlighted all of UNESCO’s work to advance tolerance, respect and mutual understanding between cultures and peoples, including those of different faiths.

“Intercultural and interreligious dialogue is essential today, in a world in deep change, where societies are transforming quickly,” declared the Director-General. “We need to build new bridges of dialogue, to promote tolerance and to fight against all forms of discrimination.”

“It is important, in this era of globalization, to recognize that people increasingly perceive themselves as having multiple identities and affiliations. This is a result of social transformation, new technologies and flows of migration, and it is therefore crucial to value diversity and religious diversity, for greater respect and understanding” declared the Director-General.

The Director-General highlighted the wide scope of UNESCO’s work to take this agenda forward, including through education for human rights, the safeguarding of cultural heritage and the promotion of cultural diversity as source of strength for all societies to share.

Irina Bokova underlined in particular the International Decade for the Rapprochement of Cultures (2013-2022), for which UNESCO has been designated as lead agency, as a fitting framework to build new forms of dialogue at the global level as well as an opportunity to deepen cooperation between the two institutions. In this respect, the next session of the UNESCO Executive Board will examine a draft Memorandum of Understanding with KAICIID.

“Without efforts to disseminate the values of tolerance and dialogue, without efforts to increase knowledge of others and to foster respect for the dignity of all human beings irrespective of their age, sex, origin, religion, culture or occupation, we cannot build the defences of peace in the minds of men and women, which is UNESCO’s core mission.”

Many speakers noted that globalization may lead humanity into the temptation of neglecting cultural diversity or undermining its importance as a wealth for humanity.

In this spirit, the Director-General and the Secretary-General of KAICIID welcomed the opportunity of this meeting and looked forward to deepening cooperation, including in the fields of education, intercultural and interreligious dialogue, work for youth engagement and on the media as a tool for dialogue and mutual understanding.