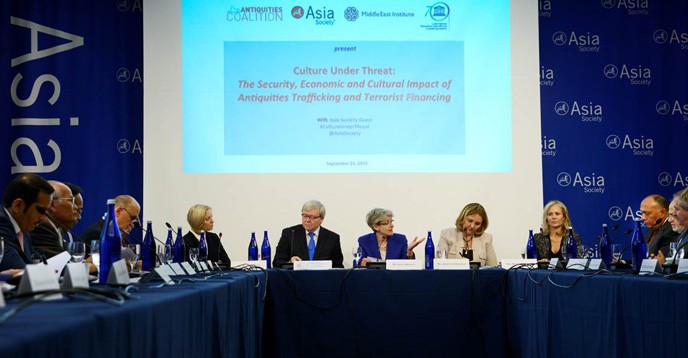 On 24 September, UNESCO Director-General, Irina Bokova, participated in a high-level conference on the destruction of cultural heritage in conflict, organized by the Asia Society, the Antiquities Coalition and the Middle East Institute, held at Asia Society Headquarters in New York.

“Culture is attacked, precisely because of what it represents to the people of Iraq and Syria and the region, because of what it embodies to all women and men – a vision of humanity united around diversity,” declared the Director-General, giving an overview of the extent of destruction to cultural sites in Syria and Iraq.

She reviewed UNESCO’s action to mitigate the risk of destruction and pillaging through monitoring and capacity-building, to fight illicit trafficking with neighbouring countries and all international partners through enhanced law enforcement and border control, to document what has been destroyed and prepare for reconciliation, as well as to counter the propaganda of hatred through new forms of communication.

She underlined the importance of UN Security Council Resolution 2199 here, and UNESCO's leadership in moving it forward.

This includes the launch at the University of Baghdad in March of a global social media campaign, #Unite4Heritage, to engage youth in challenging the propaganda of violence and to strengthen unity around shared values.

“This is why today, more than ever, we must stand together, to protect cultural heritage, combat illicit trafficking of cultural property and to transmit this shared wealth to future generations, so they can build stable and just societies."

The Director General said that the fight against cultural cleansing is a peacebuilding imperative: "these are attacks against peace, to undermine the grounds for reconciliation."

While commending UNESCO for spearheading the international response, former Prime Minister of Australia Kevin Rudd emphasized that "the strong voice and engagement of foreign ministers are needed - globally, and in the region."

The Foreign Minister of Egypt, H.E. Mr Sameh Hassan Shoukry, called for stronger action, including regional cooperation, reminding of the Cairo Regional Conference on Culture under Threat, in May‎.

He laid emphasis on the need to act urgently and together, with the international community standing united for dialogue and peaceful coexistence. He supported UNESCO's reference to 'cultural cleansing' to depict the threat posed by violent extremism.

She linked the fight against trafficking with the wider struggle against terrorism, underlining this starts with national legislation and policies:

"This is about the essence of humankind," said the Australian Foreign Minister.

H.E. Mr Ibrahim Al-Jaafari, Foreign Minister of Iraq‎‎, said cultural destruction and looting are attacks against the history of human civilisation, the present and to abolish its future. He stressed the need for legal responses and stronger regional cooperation against trafficking.

"Iraq is on the frontline," he said, "we must not allow the culture of despair to spread."

"There is so much to be done," said Irina Bokova, "to strengthen legislation, to bolster capacities, to deepen cooperation, all of this to protect the cultural heritage that belongs to us all."