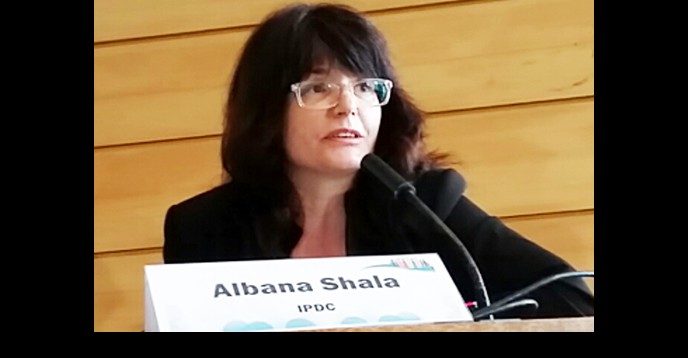 “Journalists' safety online and offline concerns all of us. Their killings if unpunished make checks on power impossible”. This was the message of IPDC Chair, Ms Albana Shala, to the recent conference on Internet issues held at UNESCO Headquarters on 3 and 4 March 2015, titled “Connecting the dots. Options for future action.”

The multistakeholder event was convened to assess a draft UNESCO study on Internet issues of access, freedom of expression, privacy and ethical dimensions of the Information Society.

Ms Shala highlighted that the forthcoming IPDC Bureau meeting on 27 March will discuss the protection of journalists at three levels: state officials, newsroom policies, and individual capacities, and give attention to digital protection as well as physical protection.

Ms Shala added: “In a global world, to stop journalists being killed anywhere, it is necessary to stop the attacks everywhere. There should be no space for ‘precedents’ and copycat killings.

“Journalists in all countries and on all media platforms, need to be protected, and perpetrators of attacks must be brought to justice everywhere.”

The IPDC Chair reminded the conference that IPDC was the cradle of the UN Plan of Action on the Safety of Journalists and the Issue of Impunity, which served as an internationally agreed framework for multi-stakeholder co-operation in securing safe freedom of expression and justice for those who are attacked for their use of free expression.

She pointed out that the Director-General’s report to the IPDC Intergovernmental Council on judicial follow-up by States regarding the killings of journalists covered the cases of online and social media producers as well as traditional media.

The Programme had also given support to safety training projects that include the digital dimension, such as a Massive Open Online Course on free expression and the law, attracting more than 1000 judicial actors in Mexico.

In addition, IPDC had made a contribution to the UNESCO consultative Internet study by hosting a discussion on online privacy and freedom of expression with five experts at the Council meeting in 2014. “As an integral part of this Organization, IPDC will be there to make its unique contribution to any follow up of the study that is decided by the UNESCO Member States,” said Ms Shala.

Fostering Freedom of Expression, Media Development and the IPDC, Safety of Journalists