Interview: Education about the Holocaust and genocide in Argentina 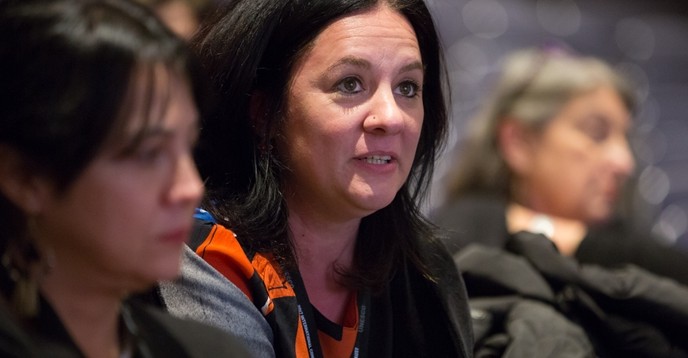 “Reflecting on difficult pasts allows learners to raise questions about life in Argentina today,” says Samanta Casareto, member of the Philosophy and Letters Faculty at the University of Buenos Aires. Together with Damian Szvalb and Maria Celeste Adamoli, from the Education and Memory Program of the National Ministry of Education, Maria Jose Kahn, from the ESMA Memorial Site Museum and Jonathan Karszenbaum from the Buenos Aires Holocaust Museum, she has developed a project to advance the institutionalization of education about the Holocaust and genocide in Argentina. In support of this goal, the team has organized teacher workshops and is developing educational  materials on how memory sites in Argentina can contribute to teaching and learning about these important topics. The project is the outcome of the Argentinian participation in the 2017 International Conference on Education and the Holocaust (ICEH), organized by UNESCO and the U.S. Holocaust Memorial Museum (USHMM).

Why is it important to teach and learn about the Holocaust and genocide in Argentina?

Argentina is traditionally an immigration country. In the early 20th century, most people who lived in Argentina were not born there. Many immigrants came from European countries. Many of them had fled war and mass atrocities, including genocide. The heritage of these groups is still very present in our society today. We have shops owned by immigrants from Armenia with inscriptions that commemorate the mass atrocities committed by the Ottoman Empire during the First World War. Argentina has the largest number  of Holocaust survivors in Latin America.

Mass violence is also a part of Argentina’s national history. From 1976-1983, Argentina was under the control of a civic-military dictatorship under the leadership of General Videla. During this period, society was exposed to state-sponsored terrorism and forced disappearances. Many opponents of the military regime were detained and killed in one of the 340 clandestine prisons.

Even though this happened 40 years ago, it remains a very contemporary issue. The fates of many victims of the military regime remain unknown. There are also about 500 children who were born in clandestine prisons and who were separated from their families. Many of these children are still unaware of their true identities.

In addition to this more recent history, scholars are now beginning to question more critically the time of Spanish imperial rule and mass violence committed by the Argentinian State against native populations.

All of these examples show that the experience of genocide and mass violence is very much intertwined with our national history. This is why it is very important to teach about it and to understand the drivers behind mass violence and why genocides happen. The reflection on social practices in the past also allows us to raise questions about life today and to examine topics related to societal diversity, respect and coexistence.

How are education about the Holocaust and genocide currently addressed through the national education system?

Given the importance of the topic in our national context, teaching and learning about the Holocaust and genocide is already quite well institutionalized in Argentina. Since 2006, Argentinian provinces are encouraged to incorporate lessons on the recent past, human rights, and the defense of the rule of law and democratic values into their school curricula as per article 91 of the National Education Law 26206. The history of the Holocaust and genocide is also included in the list of Priority Learning  Subjects (NAP) taught in all provinces as well as in Resolution 80/09 and Resolution 269/15 of the Federal Council, in which all Ministers of all Argentinian provinces are represented. These lessons are included in history and social science classes, but also citizenship education classes on the secondary education level. Many universities also offer courses on memory and history that cover the Holocaust and other genocides. For example, the La Plata National University offers a Master’s program in Memory and the Tres de Febrero University built a Center of Research in Genocide Studies.

Twelve years ago, 24 March was declared a federal holiday in Argentina. This day marks the beginning of the Argentinian civic-military dictatorship and commemorates its victims. Many teachers use this occasion to explain to their students why this day is important. On that day, some schools also participate in marches in commemoration of the victims. These extracurricular activities significantly contribute to learners’ understanding of their national past and the consequences of mass violence.

The federal government of Argentina has been involved in this subject for many years. The Federal Ministry of Education has established an Education and Memory Program, dedicated to supporting and advancing education about violent pasts, including the Argentinian civic-military dictatorship and mass atrocities committed in other countries. The Argentinian Minister of Education is the Argentinian focal point of the UNESCO Latin American Network on Education about the Holocaust and Other Genocides and Argentina is also a member of the International Holocaust Remembrance Alliance. Through these memberships, the Argentinian government is committed to support policies, research and education in support of upholding the memory of the victims of the Holocaust and other genocides.

How does your project contribute to further advance education about the Holocaust and genocide in Argentina?

In October and November 2018, we implemented three intensive workshops with secondary school teachers in three Argentinian provinces: Cordoba, Tucuman and Ciudad de Buenos Aires. The workshops focused on how memory sites, such as museums and memorials, can contribute to education about the  Holocaust and genocide in Argentina. We particularly focused on education about the Holocaust as a tool to introduce lessons about state-sponsored mass violence in Argentina. Each workshop was attended by 60 social science teachers who had been selected in cooperation with the respective provincial Ministries of Education.

During each workshop, we worked with a local memory site of a former clandestine detention center: ESMA in Buenos Aires, La Perla in Córdoba, and Escuelita de Famaillá in Tucuman. Through our project, we try to connect these memorial sites with teachers and schools and show them how they can profit from one another.

Traces of memory can be found in many places in Argentina. They do not always refer to the same history. Many clandestine centers from the time of the State-sponsored terrorism period have been turned into memorials and there are also Holocaust museums. All of these can provide valuable learning environments.

Which tools and methods have you introduce to the educators that have attended your workshops? What has been their general feedback?

All workshops were structured similarly. In the first session, we provided participants with a detailed overview of the history of the Holocaust and looked at several other historical examples of genocide and mass violence. We wanted to ensure that teachers were familiar with the processes that can lead to mass violence and understood how this knowledge can help to prevent future genocides. We also used images and testimonies in these sessions.

In the second session, we asked the teachers to share their personal experiences with teaching about these topics. Many teachers supported the idea that teaching about the past is of high relevance to help students understand and respond to contemporary challenges in Argentina, such as police violence, discrimination against the economically disadvantaged or immigrants, the rise of far-right political parties in Latin America and violence against women. Students are exposed to these problems every day. Participating teachers reported that their students frequently reproduce violent language and practices that they witness, while others are themselves victims of discrimination.

Teachers also mentioned denial as a common theme, including Holocaust denial and distortion and the denial of the crimes committed during the Argentinian military dictatorship. In response to this, we hope to provide teachers with tools to support their efforts in countering these worrisome tendencies.

An essential part of the workshop was the visit to a former local clandestine prison. For each workshop, we organized a session with the people working in local memorials and museums who explained how these spaces could be used to teach and learn about the history of the military dictatorship and civic responsibility today.

How will you build on the success of your workshops?

Now that the workshops are over, we are starting to look toward the future. We would like to reach more teachers. That is why we are developing a teachers’ guide focused on the ways in which to incorporate lessons about the Holocaust and genocide into school and extracurricular activities. In cooperation with the Federal Ministry of Education, we are planning to share this guide with all provincial Ministries of Education and to publish it online.

This guide will include a section that clearly outlines how education about the Holocaust and genocide can contribute to the prevention of future genocides. We are convinced that the phrase “Never Again” has to be supported by a concrete agenda and we are hoping that our guide can help frame this agenda.

We also plan to further expand our project. One step will be to incorporate approaches linked to new technologies, such as social media and digital maps. We would like to create an interactive online map that provides an overview of various memorial sites in Argentina, including Holocaust memorials and museums as well as Jewish cemeteries and synagogues.

In addition, we are planning to organize workshops in more provinces and to continue our cooperation with civil society. The Federal Ministry of Education has expressed their continued  support of this project, including these additional workshops.

How has the support of UNESCO and the USHMM been beneficial for the success of your project?

The support from UNESCO and the USHMM has been very valuable from the start. During the International Conference on Education and the Holocaust (ICEH) in December 2017, we were able to meet with the social media team of the USHMM, who taught us about using online tools in support of education about the Holocaust and genocide. This triggered our idea of incorporating a social media aspect into our project. Now that we have created a foundation through our first workshops thanks to the support from UNESCO and the USHMM, we can start to make this happen.