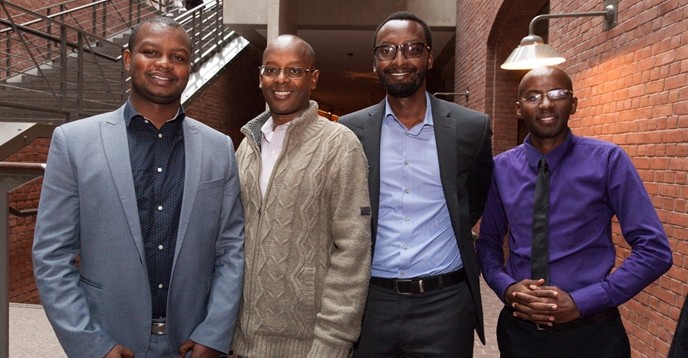 Members of the Rwandan team of educators during the 2015 ICEH at the U.S. Holocaust Memorial Museum (left to right: Freddy Mutanguha, Jean-Damascène Gasanabo, Bonheur Pacifique and Aimable Mpayimana).

Meet Freddy Mutanguha on the occasion of the 2019 International Day of Reflection on the 1994 Genocide against the Tutsi in Rwanda. Mr Mutanguha is the Regional Director for East Africa at the Aegis Trust, an international organization working on the prevention of genocide through education and research. Freddy is leading Aegis’ peace education programmes in Rwanda, as well as in the Central African Republic, Kenya and South Sudan. He joined Aegis in 2003 and was responsible for genocide documentation, when the Kigali Genocide Memorial was established.

Preserving the history of the genocide was among the most important and difficult issues that Rwandans had to address in the aftermath of the tragedy. 25 years ago, no one knew where to start. It was not clear, who should be leading this process: the government, the survivors or the international community.

The government took the first important step by adopting the laws prosecuting the crime of genocide. This was a starting point for transitional justice in the country. Survivors were able to play an active role in this process by making sure that the perpetrators were held accountable for their crimes, in particular through the gacaca* courts system. Victims of the atrocities were given the opportunity to share their stories and grief through testimonies, and have their suffering recognized and acknowledged.

Another important step towards honoring the memory of genocide victims was through the preservation of historical places of the massacres. Identifying those places helped to demonstrate the full scale of the genocide, how it spread across the country, how carefully it was planned and executed – leaving no safe place for Tutsi anywhere in the country. Thanks to the efforts of survivors, various NGOs and the government, we now have more than 200 genocide memorials in Rwanda. Preservation of historical places of genocide went in parallel with the process of providing dignified burials to genocide victims. This is an ongoing task that requires the commitment of many Rwandans, as the vast majority of remains of the victims of the genocide has not yet been placed in graves that preserve their dignity.

Finally, genocide survivors, with the support of associations such as IBUKA (survivors across Rwanda) and AVEGA (genocide widows) have also started to record and collect their stories, in order to be able to pass their testimonies to future generations.

In your opinion, what role does education play in coming to terms with this violent past?

The underlying ideology of the genocide had been promoted in Rwanda for nearly 30 years before the mass atrocities took place. The ideology was integrated into school curricula, perpetuating the idea of a clear division between Hutu and Tutsi students and marginalizing the latter. I experienced this myself. Education helped to prepare the genocide: it influenced the mindsets of those, who later willingly perpetrated it. With this in mind, we now aim to employ education as a positive tool to restore peace. Our task today is to teach young generations about violent past in order to preserve its memory and to prevent future atrocities. Learning about the genocide can help learners to develop critical minds and empathy for others, and can teach them to be responsible for their own actions. The evidence, documents, and testimonies collected in the Kigali Genocide Memorial provide powerful tools to support this education.

Academic research on the genocide against the Tutsi has essentially contributed to a better understanding of the psychology of the perpetrators. It has helped to bring more clarity to why and how ordinary individuals turned into perpetrators of a genocide. Research is also instrumental for identifying root causes of mass atrocities and for developing measures to prevent repetition of such calamities in future.

A famous Rwandan proverb says: ‘a stone that is visible cannot destroy a hoe.’ I think it greatly reflects the main purpose of education about genocide – teaching and learning about violent past is essential, if we want to prevent mass atrocities in the future.

25 years after, how do you teach about this history in Rwanda?

Right after the genocide, no one knew how to talk about what had happened, let alone on how to teach about it. A first challenge for educators was to come up with some educational techniques that would not instigate more anger and would not put a collective blame on learners. Over the last 25 years, we managed to gradually develop an educational strategy that promotes teaching about our violent past and at the same time has a strong preventive element. As part of this strategy, education about genocide was integrated into the national curricula: it is now taught in primary, secondary and high schools. It is not a standalone subject, it is a crosscutting theme that is integrated into many school disciplines, and is being taught in various school years.

In 2015, you participated in the first International Conference on Education and the Holocaust, organized by UNESCO and the U.S. Holocaust Memorial Museum. Has your participation in the conference been beneficial for advancing education about genocide in Rwanda?

The conference was a great opportunity for our Rwandan team of educators and myself to familiarize ourselves with the best international practices on educating about violent pasts, especially with educational approaches related to teaching about the Holocaust. We learned how to best organize the content of our teaching programmes in support of genocide education, and were able to improve our teaching methodologies.  We also had an opportunity to share our experience and present how we educate about genocide in Rwanda.

After the conference, we continued our collaboration as a team and jointly organized a series of teacher trainings in Rwanda. The feedback we received from participants was very positive: All participants found learning about the history of the Holocaust extremely useful. Learning that similar atrocities had been perpetrated at in other countries, at different times, helped them to understand that the Rwandan experience of the genocide against the Tutsi is of concern for the whole of humanity, not only for local people. Many of the participating teachers had themselves experienced the genocide, as perpetrators or as victims. The training helped them to open up and talk about their own stories. Now, education about the Holocaust is also a part of education about genocide in Rwanda, and this is a very positive development.

We really appreciate the role of UNESCO in organizing this conference and the opportunities it has brought to us.

Why do you think teaching and learning about the genocide against Tutsi is of global importance?

Before the 1994 events, the Holocaust or the genocide in Cambodia seemed to be something that belonged to history and unimaginable in Rwanda. Similarly, I am sure that at the time of the genocide in Rwanda, people in Darfur or Sudan could not imagine that, a few years later, mass atrocities would be committed in their countries. Through these devastating experiences, we are now aware that genocide can happen at virtually any place, at any time and in any society. Teaching about the genocide against the Tutsi, along with other historical cases of genocide, helps to show what various facets genocidal violence can have, and how different its settings can be. It underlines the fact that genocides and genocide prevention are of global concern and that it takes a joint effort of all of humanity to prevent similar atrocities from happening in the future.

*Gacaca is a system of community-based courts in Rwanda inspired by local tradition. The gacaca communal justice system was established in order to speed up the prosecution of suspects accused of involvement in the 1994 genocide against Tutsi. More than 2 million people were tried by the gacaca courts.