Internet Universality Indicators in Senegal: Consensus around the preliminary report 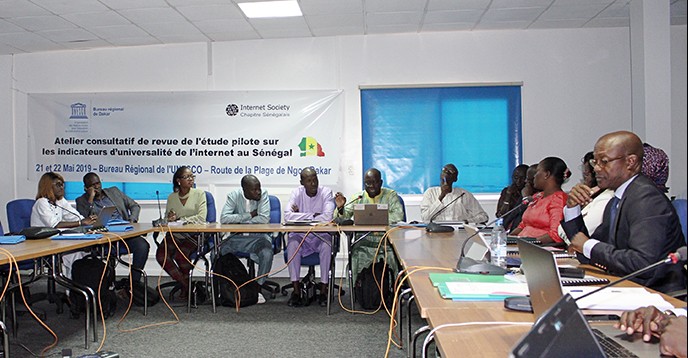 The Internet Universality Indicators framework offered by UNESCO is a tool that will support the Senegalese government and all actors to improve the Internet environment.

Such is the conclusion that was drawn from the national consultation that brought together stakeholders in Dakar on 21 and 22 May, upon the initiative of the Senegalese chapter of Internet Society (ISOC), the Multisectorial regional bureau of UNESCO in Dakar, the ITU bureau in Dakar and the Ministry of Digital economy of Senegal.

Today the Internet, more than a technology, reaches all dimensions of humanity: ideas-sharing, exchanges of all kinds, entertainment, etc. It boosts, in ways that were not conceived of before, diverse fields such as education, health, creativity… So imagine for a moment that your freedom of expression be censored online, that you be exposed to words propagating hate, without protection or without the power to disregard them. Imagine, further, being able to use the “Web”’s potentialities to learn, to start a business, to trade, while your fundamental rights are respected and your online data is protected. Internet usage favoring the development of digital economy greatly changed the environment of companies, individuals, households, States.

« The digital economy is a true engine for economic and digital development, a catalyst of growth, of jobs, which contributes to the reducing inequalities” declared Mr Ndiaye Mbaye, Head of Cabinet of the Ministry of Digital Economy in Senegal, during this national consultation.

UNESCO proposed the concept of Internet Universality to underline, in this space of social and economic interactions, the necessity of putting forward the reinforcement of individuals’ and communities’ rights and of promoting sustainable development.

Adopted since 2015, then finalized with the Internet Universality Indicators in 2018, this concept established a framework of indicators enabling to assess the degree of fulfillment, in each country, of four principles, named ROAM. It results that the Internet should be based on human Rights (R), should be Open (O), should be Accessible (A), and should be nurtured by Multi-stakeholder participation (M). Far from a classifying or rating instrument, these Indicators operate as a dashboard meant to guide States towards an Internet that benefits from policies and strategies that are appropriate for all.

The final aim “is an Internet that is based on the guarantee of every person’s rights, that is open, inclusive”, according to Mr Michel Kenmoe, Regional counsellor of the Communication and Information sector of the UNESCO field office in Dakar.

Some fifty participants from the private sector, ICTs, higher education and research institutions, civil society, media, governmental services, reviewed the 128 indicators proposed in this pilot study. And the conclusions that emerge show that some key indicators could not be assessed, for lack of updated data.

Nevertheless, they recommend that efforts be made to reinforce policies, to update judicial frameworks for the protection of business-related and personal data, to implement control mechanisms, for the rights of Senegalese users to be taken into account.

These recommendations were broadened to the adoption of a clear positioning on the principle of net neutrality, on the implementation of a Senegalese observatory for ICTs, on the reinforced monitoring of violent acts based on gender and on online abuses, which are increasing in frequency, and on improved monitoring of results of the project on Internet of Things, to cite only a few.

The final study resulting from the process will gather all components apt to inform on the development level of all Internet dimensions in Senegal, and will include suggestions to guarantee Internet Universality to all Senegalese citizens.

“In the current stage, we are still in the phase of finalizing the pilot study on the Internet Universality in Senegal, and this workshop enabled us to complete the field survey. However, a particular emphasis on openness and accessibility indicators emerges from this consultation”, said the communications and information counsellor for UNESCO Dakar, Mr Michel Kenmoe.

Let us recall that UNESCO undertook pilot studies on Internet Universality Indicators in several countries worldwide, Benin and Senegal having been chosen as pilot countries in West Africa. This undertaking was greatly inspired by the efficiency at national scale of the evaluation of the media landscape thanks to the Media Development Indicators, the fruit of a large international consultation engaged by the International Programme for the Development of Communication in 2006.