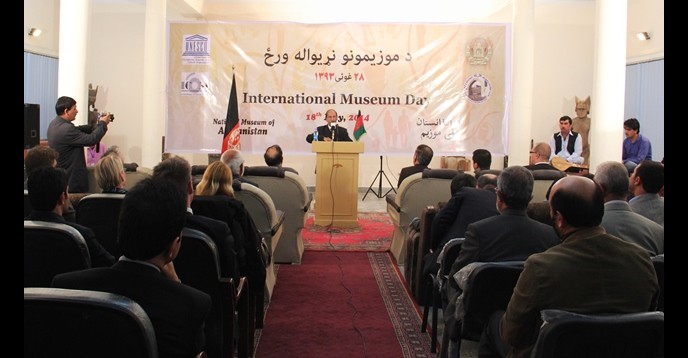 Kabul 18th May 2014- To mark the occasion of International Museum Day 2014, The Minister of Information and Culture, Dr. Sayed Makhdoom Raheen joined key stakeholders from the world of cultural heritage at The National Museum to celebrate the rich heritage of Afghanistan.


The Minister thanked key stakeholders, including UNESCO for continuous support in the protection of Afghanistan’s cultural heritage and called for further support to build a new national museum to house the increasing number of artefacts.

Mr. Paolo Fontani, Director and Representative UNESCO Office in Afghanistan highlighted the important work being undertaken by Mr. Omar Khan Masoudi and the National Museum in Kabul saying that “it is a living testament to the power of museums both to celebrate cultural diversity and to unite a nation behind shared histories.”

The museum’s current exhibition of Buddhist artefacts from Mes Aynak heralds Afghanistan’s pre-Islamic culture and history. The recent worldwide exhibition of Bactrian Gold and Greco-Roman artefacts from The National Museum is also an example of the power of museum collections to reach a global audience.

Herat’s Museum is a reminder of the city’s past as a centre of cultural excellence, a cradle of literature, poetry, science and learning; for those Afghans who visit it, the museum fosters a sense of shared pride in a glorious history and unites people in a desire for a future which builds on a positive sense of shared history.

UNESCO continues to support the Government of Afghanistan to protect World Heritage Properties in Bamiyan and The Minaret of Jam in Ghor and provide capacity to the government in the implementation of international conventions to protect these World Heritage Properties. Customs officers also receive training in preventing the illicit trafficking of artefacts. This year will also see the construction of a museum and cultural centre in Bamiyan, creating a space for people to admire and share their cultural heritage.