On the 27 September 2018, the UNESCO Khartoum office together with the Sudanese Ministry of Information, Communication and Information Technology (MoICIT), Ministry of Education (MOE) and National Commission for Education Science and Culture (NatCom) celebrated the International Day for Universal Access to Information (IDUAI) 2018 in Khartoum, on the premises of the Telecommunication and Post Regulatory Authority (TPRA) of the MoICIT in Telecommunication Tower. About 120 people enjoyed the event, which was also honored by the Minister of MoICIT, H.E. Mr. Bushara Arow; the State Minister in the MoE, H.E. Mr. Ibrahim Adam Ibrahim, the UNESCO Representative to Sudan, H.E. Dr. Pavel Kroupkine, the General Director of the TPRA, Dr. Yahya Abdella, the General Director of the National Information Center, Mr. Mohammed Abdelrahim Yaseen, the Gereral Secretary of the NatCom, Dr. Abdulgadir Noureddin, the General Secretary of the National Council for People with Disabilities, Col. Badr al Din Hassan, and other distinguished officials and guests in the country.

The Day contained three events: the high-level forum on digital inclusion, the closing of the digital inclusion week and the launch of the Sudanese Education Policy Review made by UNESCO and the Ministry of Education. The first two events were organized with a good contribution from ITU’s Office in Cairo.

Dr. Pavel Kroupkine, the Representative of UNESCO to Sudan, initiated the opening session with memory, that it is already 4th time Sudan celebrates the IDUAI under the auspice of the Minister responsible for the communications and IT. He thanked UNESCO Headquarters, ITU and it’s Arab Regional Office, the MoICIT, MoE and NatCom. He appreciated the national team of the education policy review for their efficient work. He stressed on the need of strengthen the people with disabilities in the information technology area. Mr. Karim Abdelghani, the programme coordinator of ITU Arab Regional Office, welcomed the guests and thanked the Government of Sudan for giving the attention to the telecommunication sector and stressed on the need to include people of disabilities in these efforts and to guarantee the gender equity. Mr. Abdelghani told that according to UNDP there are 103 million people do not have the reading and writing skills, 60% of them are women. Women, who have access to internet, are about 5 million less than men. He mentioned WHO data, in accordance with which the people with disabilities in the communities are facing many communication challenges, that could be addressed through the use of telecommunication. He also presented the Smart Villages Model, which aims to empower rural dwellers via ICT. 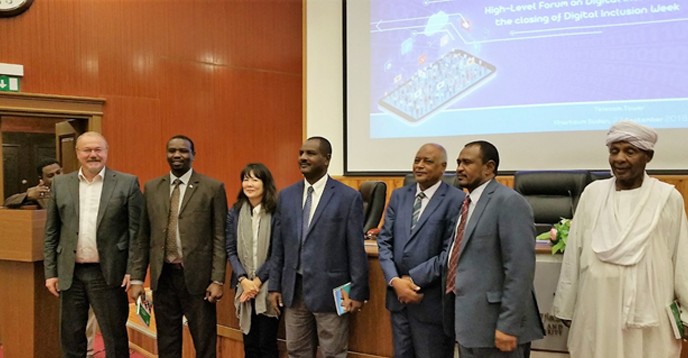 Eng. Mohammed Abdelrahim, the director of the NIC, welcomed the participants and summarized the digital inclusion week, which included the education, the empowerment of people with disabilities and smart agriculture. He mentioned about the World Tourism Day, which is also on 27 September, and which has this year a theme “Tourism and the digital transformation”. He appreciated the participation of the NGOs, private sector and the international experts and thanked UNESCO for the support and partnership. He told that Sudan had made a progress in the information and telecommunication fields and started to rebuild the infrastructure using information technology. He listed three projects, which were recently developed using the information technology, which are the electronic application for the universities and higher education institutes, the national revenues collection through electronic gates and electronic transfer of the governmental financial transactions. Dr. Yahia Abdallah Mohamed, the director of the TPRA, appreciated the efforts of the experts during the active inclusion digital week and he asked them to share their expertise with the stakeholders. He thanked the private sector, UNESCO, the NatCom and MoICIT and stressed on the role of the communities and the National Council of the People with Disabilities.

The State Minister in MoE, Mr. Ibrahim Adam Ibrahim, addressed the event expressing his pleasure of the success of the digital week, and of the partnership with the MoCIT and UNESCO. He thanked UNESCO’s Education Officer, Dr. Aiman Badri, for the efforts assisting the MoE. He stressed on the importance of the electronic literacy and mentioned the MoE’s work on having the right environment for the electronic education and orienting the students and new generations in general in using ICT in education. In the end of his speech he underlined, “we will work together with our partners to prepare the schools for the electronic education in the areas with need”, and presented the Minister of the MoITCT, Mr. Bushara Arow. Mr. Bushara, welcomed the participants, and started speaking about different important components in the smart life, such as education, heath, communication and finances. He recalled the importance of making all these easy to use for people with disabilities. He mentioned that the digital inclusion can help in elevating the economy, in particular through involvement of women. He called for encouraging youth for innovations in smart life styles. He thanked the guests, and expressed his support to the tradition of celebrating the International Day for Universal Access to Information (IDUAI). 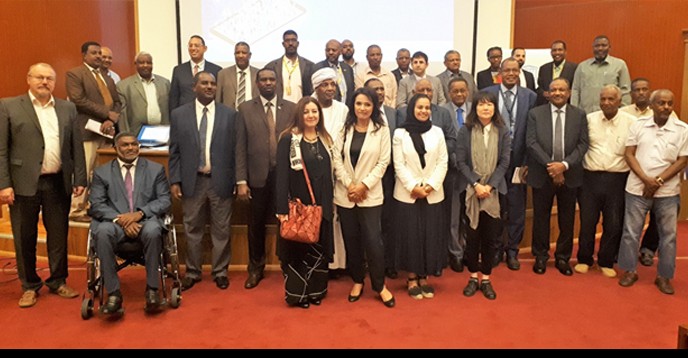