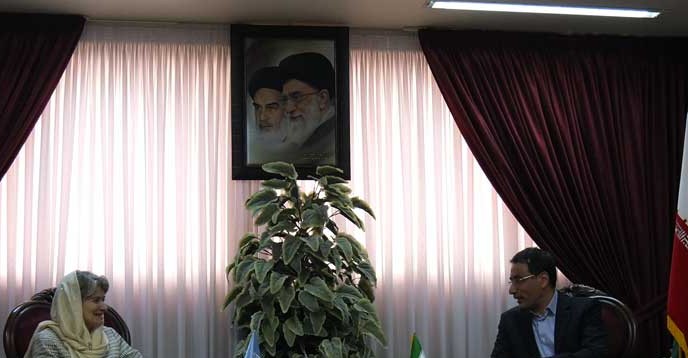 
The Minister underscored "UNESCO's influential role in achieving sustainable peace". "We will, therefore, spare no efforts in deepening our cooperation with UNESCO in enhancing our contribution to core priorities, such as quality education, women's empowerment, and scientific research. Human progress, in particular in the area of science and research must go beyond borders. Scientists must be provided opportunities for research”.

The Director-General, commending the Minister for the great achievements in the area of Education for All and girls' primary and secondary education, emphasized that "the interdependence of the world today calls for a concerted effort towards building more inclusive societies that create the conditions for human ingenuity to flourish, for crafting new ideas building on the wealth of diversity across the world as well as on the contribution of all the components of our society, women and men, civil society, youth, the private sector."

The meeting continued through an interactive exchange with scholars, scientists and representatives of the Ministry of Science and Research, featuring presentations on the 4 Category II Centres in the field of Natural Sciences under UNESCO auspices.

Irina Bokova commended Iran for its active engagement in the area of natural sciences, especially water management, stressing the growing need for the sharing of best practices and knowledge across all regions of the world to fight major challenges, such as global warming and desertification. In that context, she praised the unique research conducted through the traditional hydraulic systems of the Qanats in Yazd.

Referring to the adoption by the General Conference of UNESCO at its 37th session in November 2013 of the first IOC-related Regional Educational Centre for Oceanography for Western Asia, the Director-General declared that "the international community had gained new strength in research on oceans and marine sciences to benefit Iran, Western Asia and the world at large."

During her meeting with H.E. Mr. Ali Asghar Fani, Minister of Education, the Director-General reaffirmed the importance of investing in quality education -- teacher training being one of the cornerstones in that respect.

"Teachers hold the key of the future in many parts of the world", declared Irina Bokova.

She went on to highlight the critical role of the Education First Initiative, launched by UN Secretary General entrusting its leadership to UNESCO, which lays a strong emphasis on sustaining the teachers' profession and on educational objectives in the 21st century.

"If we want to achieve a more prosperous world, peaceful and inclusive societies, we need to equip students with the requisite skills and competencies to become global citizens that are culturally-literate", said Irina Bokova.

Minister Fani recalled the words of President Rouhani at the United Nations General Assembly, highlighting "the need for unconditional equality of access of all children to education as a fundamental factor to prevent violence and to build inclusive societies, regardless of language, ethnicity or gender."

"Education must also enhance the capacities of youth for critical analysis, in order to provide them with the right to protest but also to become true citizens" declared Minister Fani.

He stressed the four policy targets of his Ministry -- aimed at expanding partnerships; developing human resources; strengthening school management and consolidating the budget of the Ministry of Education.

Pursuing by stating that "Quality education starts with good teachers", Minister Fani informed the Director-General about the establishment of the Farhangian University for Teacher Training and its 100 branches spreading across the country. He introduced its President, Mr. Mehrmohammadi, who referred to the pivotal role played by the University for Farsi speaking countries, namely Tajikistan and Afghanistan, in defining their teacher training policies. Underlining the meaning of the word "Farhangian" i.e. "culture" and stressing that in Iran’s culture it is intrinsically related to teachers and voicing the instrumental role played by the Teacher Training University in supporting the mission of the Ministry of Education across the country,
Mr. Mehrmohammadi concluded by saying: "Teacher Education needs greater international attention and a global infrastructure to exchange knowledge and best practices across the world."

The day ended with a visit to Golestan Palace, former residence of Naser-el Din, Shah of the Qajar Dynasty.