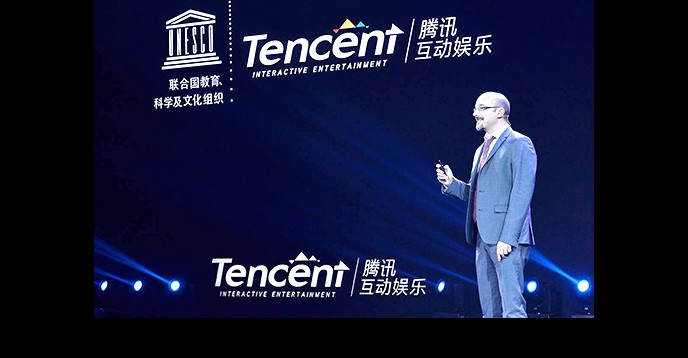 How can traditional games be safeguarded as a living heritage? How can new information and communication technologies (ICTs) be used not only to preserve traditional games but also to reproduce and adapt them to the digital age in forms that new generations can understand? These critical questions were discussed by experts, innovators and stakeholders at the 2015 Tencent Interactive Entertainment Art Summit on 26 November in Beijing.

The Art Summit “Protection and Inheritance of Traditional Games in the Internet Era” was organized by Tencent, China’s leading IT company, and the Chinese National Academy of Arts. More than 100 participants attended the Summit, which was also live-streamed on the Internet. JIA Leilei, Vice-president of the Chinese National Academy of Arts, and Edward Cheng, Vice-president of Tencent, opened the Summit. Cheng took the audience to the origin of the UNESCO-Tencent project “The Creation of a Digital Library on Traditional Games” and reiterated Tencent’s strong commitment to the protection, preservation and promotion of traditional games as a common living memory of humanity.

Traditional sports and games are a means to convey values of solidarity, diversity, fair-play, inclusion, and cultural awareness. They also contribute to logical thinking, mathematical and civic education. Moreover, traditional sports and games reflect cultural diversity, and foster mutual understanding and tolerance among communities and nations. However, many traditional games have disappeared and those that survive face imminent disappearance. Globalization, migration, demographic and societal changes are some of the factors contributing to this trend.

Davide Storti, Programme Specialist in the Communication and Information Sector, shared UNESCO’s participatory and open approach to the issue, noting that for many years now, UNESCO has been entrusted by its Member States to play a leading role in reinforcing global cooperation in preserving and enhancing traditional and indigenous sports and games. “Preserving the information and knowledge about traditional games is important for the generations to come. It is equally important that such knowledge remains in the public domain, and is accessible by everyone”, Storti said. This is also the overall objective of the UNESCO - Tencent project.

NIE Zhiming, Vice-general Manager for Research and Development shared Tencent’s insights on building a “different” digital library as a repository of traditional games. Tencent plans to use their most advanced technologies, such as somatosensory technology and multidimensional experience to build a truly connecting, interactive and open library.

In a panel discussion, Beatrice Kaldun, Head of UNESCO’s Dhaka Office and Representative to Bangladesh, provided a broader perspective on traditional games in the context of intangible culture heritage. Kaldun noted that the first step in safeguarding intangible cultural heritage is to assess and identify the heritage at the country level, to raise awareness and to create or renew interest in such heritages, so as to bring new light to what should be an active, ever-changing form of living heritage. On the question on how to engage young people, Kaldun pointed out that under the Convention for the Safeguarding of Intangible Cultural Heritage, collaboration among local communities, government, national and international institutions and stakeholders contributes to ensuring that intangible culture heritage is transmitted to the young generation, both through formal and non-formal education.

Other experts, innovators, art creators and game developers, including from Tencent Interactive Entertainment Group, Tsinghua University, and U.S. based MIT Game Lab and NuVu Studio, shared their understanding and experience on how to creatively engage young people with traditional cultures and games.

The Summit also witnessed the launch of a multi-stakeholder partnership initiated by Tencent.

On the margins of the Summit, Tencent and UNESCO held a series of meetings to discuss the next steps of the UNESCO-Tencent partnership, which will focus on the on-site collection of traditional games by UNESCO’s local partners in Bangladesh and Mongolia, two pilot countries under the current project phase. The information on games collected will be hosted on an open and accessible online library being developed by Tencent. It is expected that some of these games will be adapted into various digital forms.