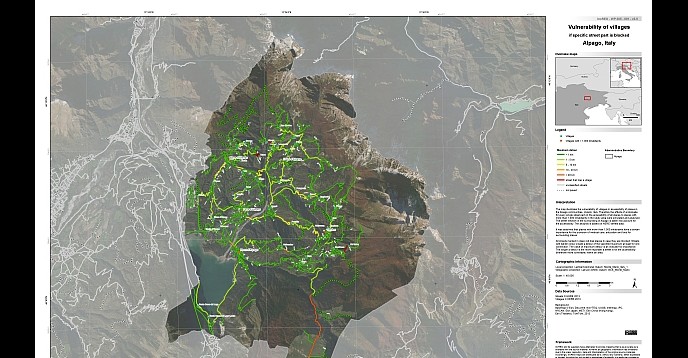 The Final User validation Workshop and the extended testing review of IncREO-derived products on QGIS programme will take place at Palazzo Zorzi, premises of UNESCO in Venice, on 15-17 October 2014. This event is part of the EU project IncREO’s work programme and it is organised by the UNESCO Regional Bureau for Science and Culture in Europe, Venice (Italy), in cooperation with the Italian National Research Council - Research Institute for Geo-Hydrological Protection (CNR–IRPI), Geoville Group and Geomer along with the participation and support of the Civil Protection Department of the Veneto Region, the General Directorate of Civil Emergencies of Albania and Airbus DS as project’s lead partner.


IncREO has been launched in early 2013 in support of emergency management and risk-preparedness aiming to provide actors responsible for disaster management, civil protection and spatial planning with satellite data-based solutions and to contribute, particularly, to an improved preparedness and mitigation planning for territories highly vulnerable to natural disasters such as the Alpago area concerning landslide, earthquake and flood.

The workshop will involve project partners and end-users in order to provide the final feedbacks on IncREO products developed for the Alpago area such as: accessibility maps, assets maps, vulnerability maps, etc. All stakeholders namely, the Civil Protection Department of the Veneto Region as main end-users, along with the municipal authorities and technical offices of the towns of Chies, Farra, Pieve, Puos, and Tambre, represented by the newly-established Mountain Union of Alpago (MUA) which performs integrated functions concerning civil emergency management service for the entire Alpago area, are invited to this third, final round of consultation with project partners. Through a joint work conducted upon a shared questionnaire, possible final adjustments to the presented products will be identified and undertaken to better serve users’ needs and the overall scope of the project.

This validation meeting will be the last milestone of the Earth Observation (EO)-based product development for Alpago in view of a successful uptake by the end-users of the final outputs of the dedicated work packages 205-206 on multi-layered and multi-hazard/risk maps. In order to have a more in-depth validation and to enhance the end-users capacity in running the products, a well-tailored testing review based on an open source programme, capable of running the produced maps, with no limitations in terms of purposes and distribution, was part of our tasks as highlighted by end users in a previous assessment. The user-friendly Open Source Geographic Information System (GIS) licensed under the GNU General Public License has been identified as a suitable tool for that purpose.

The training on QGIS will be based on the IncREO-produced maps. It will involve representatives and technicians from the Civil Protection Department of the Veneto Region, the General Directorate of Civil Emergencies of Albania, the municipal authorities and technical offices of the towns of Chies, Farra, Pieve, Puos and Tambre, and of the Mountain Union of Alpago (MUA).

Increasing Resilience through Earth Observation (IncREO) is funded by the European Commission under the programme Copernicus, which aims to enhance the EU’s capacity in Global Monitoring for Environment and Security. The UNESCO Venice Office is a partner of the project which is coordinated by Airbus DS.