Inauguration of the operational centre for ocean observation in Brest 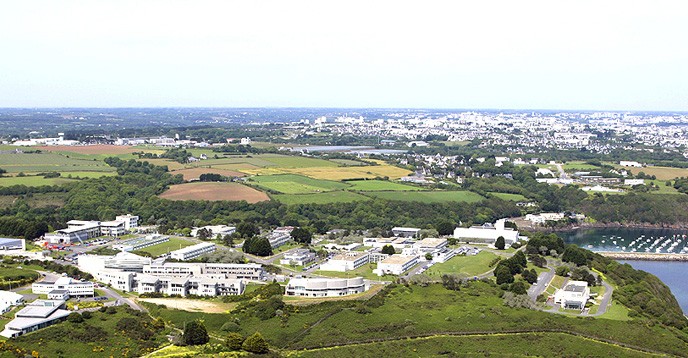 The Intergovernmental Oceanographic Commission of UNESCO inaugurated the new JCOMMOPS centre with the World Meteorological Organization (WMO) on 18 March 2015. The in situ Observing Platform Support Centre of the Joint WMO-IOC Technical Commission for Oceanography and Marine Meteorology (JCOMMOPS), which monitors ocean observing networks, is thus moving it’s centre of gravity from Toulouse to Brest in order to be closer to the high concentration of ocean professionals on the French coast.

"There are 10,000 buoys, floats and ships with equipment that take the pulse of the ocean, in addition to satellites," explained the centre’s director, Mathieu Belbéoch. They contribute to the Global Ocean Observing System (GOOS), the permanent global system for ocean observations over the long term. GOOS plays play a vital role in improving the collection of data required for the development of climate forecasts and climate change detection.

The JCOMMOPS support centre assesses networks’ performance while encouraging their harmonization and optimization. It also assists in the establishment and maintenance of several observation networks, such as Argo and DBCP, which require 2 000 deployments per year. This colossal global effort is facilitated by a dedicated team, in constant dialogue with the ocean community, and by stakeholders of all maritime fields that contribute to the deployment of equipment and to data collection.

The Centre is hosted by the French Research Institute for Exploitation of the Sea (Ifremer, Brest) and the Collecte Localisation Satellites group (CLS, a subsidiary of CNES, Ifremer and the 'Ardian investment company, Toulouse) for the collection of data transmitted via satellite platforms. The move from Toulouse Brest was done with the support of the local authorities of Brittany, including Brest metropolis, the General Council of Finistère and the Regional Council of Brittany.

The Centre will keep its information system in Toulouse, as part of the IT infrastructure of CLS and CNES, and will continue to develop a historic professional cooperation that began in 1987.

Vladimir Ryabinin, Executive Secretary of IOC-UNESCO, made a point of coming to the inauguration personally and to pursue cooperative ventures with Brest partners. "Ifremer has a long-standing experience of ocean observation," he observed. "Ifremer has a pragmatic approach to research based on leadership in supporting and processing marine observations and this enables improved understanding of ocean phenomena. That is exactly what we need to see happening in this branch of ocean sciences."

Representatives of the World Meteorological Organization were also present. "Considering that the ocean plays a central role in our climate system, investing in joint meteorology and oceanography efforts is crucial," explained Zhang Wenjian, Director of the WMO Observing and Information Systems Department. David Legler, director of NOAA's Climate Program Office, and David Meldrum of the Scottish Marine also made the trip to Brest for the inauguration.

The inauguration of the Centre was held in conjunction with the 16th meeting of Argo Steering Team, which brought together the visionary institutions and oceanographers who created this flagship GOOS network.
After a formal opening of the offices at Ifremer with the participation of local authorities and main sponsors of the Centre, the opening ceremony was held in Océanopolis, Centre for the Scientific and Technical Culture of the Sea located near the harbour. This discovery park shares the natural history of the ocean with a scientific approach combined with spectacular presentation of life in the ocean to invite the general public to dive in. Océanopolis is a partner of IOC-UNESCO; they are currently preparing a space to present IOC-UNESCO and JCOMMOPS’ work and mission to the general public in the park.

"JCOMMOPS finally has the means to achieve its full potential," concluded Mr. Ryabinin "with a strategic position in one of the world capitals of the blue economy, with an information system anchored in an operational structure in Toulouse, with a closely-knit and dedicated team that is as creative as it is experienced, and with the strong support of local communities, the centre will start a new adventure at the service of ocean observation."

The team, which also includes Martin Kramp, ship coordinator, Champika Gallage, DBCP coordinator, and Anthonin Lizé, I.T. Engineer, handled the move without breaking a stride. IOC-UNESCO will no doubt continue to strengthen ties between the Paris headquarters and the Metropole Oceane.