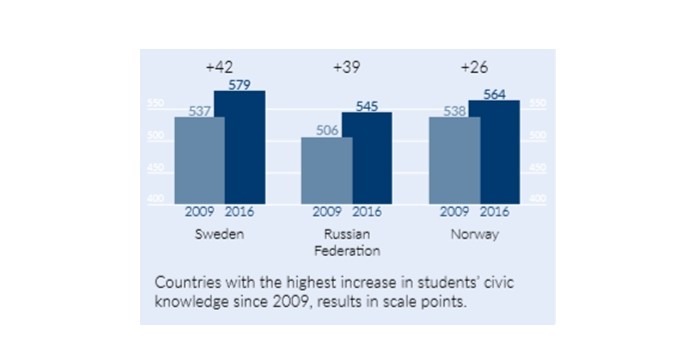 The IEA’s International Civic and Citizenship Education Study (ICCS) 2016 shows a considerable progress in learning outcomes focused on concepts of Global Citizenship and Education for Sustainable Development contained under Target 4.7 of SDG4.

ICCS 2016, conducted in 24 countries around the world, identified an increase in grade 8 (equivalent, 13-14 years old) students’ civic knowledge across participating countries. Since 2009, the proportion of students achieving at the two highest levels on the ICCS civic knowledge scale increased from 61 to 67 percent and the increase was statistically significant in the majority of countries.

In addition to examining achievement in civic knowledge and surveying the expected civic participation, ICCS 2016 collected and analysed an extensive array of data on students’ attitudes toward important issues in society. In comparison with ICCS 2009, students across a number of countries expressed higher levels of endorsement for gender equality and, in most countries, for equal opportunities for all ethnic and racial groups. Female students, as well as those with higher levels of civic knowledge and stronger interest in political and social issues, were more likely to endorse both gender equality and equal rights for all ethnic and racial groups. The majority of students viewed pollution, terrorism, water and food shortages, infectious diseases, and poverty as major threats to the world’s future. ICCS 2016 found a relatively high rate of awareness toward environmental issues among students, with 49 percent recognizing personal efforts to protect the environment as a “very important” part of good citizenship. However, only 9 percent reported their participation in an environmental action group over the past 12 months.

The data collected by ICCS 2016 establish correlations between civic knowledge, civic engagement at school, and expectations as to various forms of civic engagement. ICCS findings provide a basis for discussing the importance and effectiveness of civic and citizenship education as means of helping young people become more conscious about their roles as active and engaged citizens in a more globalized world. By integrating various elements of civic and citizenship education into curricula and improving learning and participatory opportunities, schools have the potential to foster students’ civic knowledge and engagement as well as support the development of more positive views regarding equal rights and opportunities.

Currently, UNESCO is conducting a cross study between ICCS 2016 and results of the sixth consultation on the implementation of the 1974 Recommendation concerning Education for International Understanding, Cooperation and Peace and Education relating to Human Rights and Fundamental Freedoms (covering the period 2013-2016) to provide a more in-depth analysis on monitoring of Target 4.7. The results of this study will be published online in March 2018.