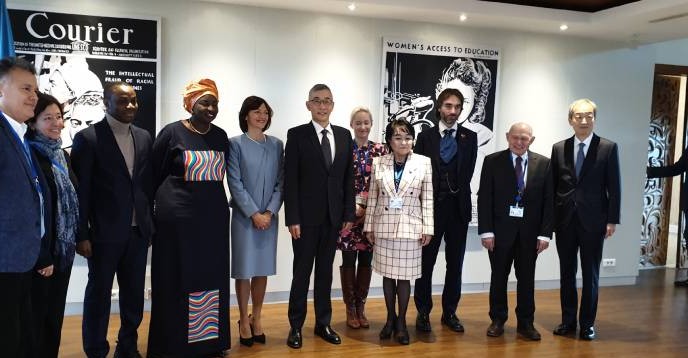 The first meeting of the High Level Reflection Group was held on 12 and 13 November 2019 during the 40th General Conference of UNESCO in Paris, an important moment for the Organization. This first meeting allowed the members to exchange views and acquire knowledge about the experiences and perspectives of each other and to learn further about the Organization.

The Director-General wished to solicit independent and recognized personalities to the High Level Reflection Group with the objective in order to feed the undertaken reflection within the Organization on the emerging global trends and challenges, which are likely to have an impact on UNESCO’s field of competence. Initially appointed in September 2019, this Group of 12 of scientists, historians, philosophers, writers, academics and other figures has now started its work. It is expected that this Group will enrich and shed light on UNESCO's Medium-Term Strategy for 2022-2029, which is under preparation and will be adopted by UNESCO's Member States in 2021. The Group's reflections will also address the repositioning of UNESCO to respond to contemporary challenges and achieve the objectives of the 2030 Agenda.

The members of The High Level Reflection Group reaffirmed their commitment to provide on how to make UNESCO programmes more focused, inter-disciplinary and responsive to the challenges of today’s world. Their analyses and advises, reviews and strategic thinking will make an important contribution to support UNESCO’s strategic repositioning for 2030.

During the working sessions, their discussions focused on UNESCO's role in defining and promoting common social and human values, major themes perceived as fundamental for UNESCO and ideas to be put in place to increase efficiency and visibility. The Group encourages UNESCO to rethink its values in the twenty-first century, refocus its action on peace and place this social and ethical approach at the service of human rights and dignity, to combat current frustrations, feelings of revolt and injustice felt in the world and particularly among young people. They all highlighted UNESCO’s comparative advantages in the area of its mandate. In addition, the members also welcomed the Strategic Transformation process initiated by the Director-General, renewing their commitment to make their full contribution to it.

The members of the Group also shared their questions and deliberations for discussion in order to refine the reflection for the next working meetings. The next steps in the process were agreed with a preliminary planning to organize two other meetings in Paris in the spring and fall 2020.