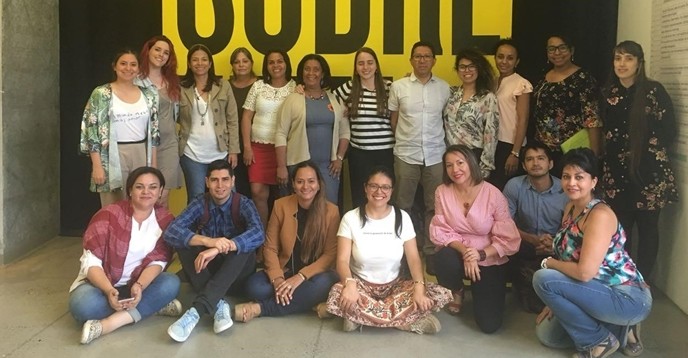 Alejandra Romero González works in the education department of the National Center for Historical Memory in Bogotá, Colombia. In December 2017, she participated in the second International Conference on Education and the Holocaust (ICEH) in Washington, DC, together with with Alejandra Cáceres Sánchez from the  National Ministry of Education, and Adriana Valderrama López from the  Casa de la Memoria Museum in Medellin. The conference, organized by UNESCO and the U.S. Holocaust Memorial Museum (USHMM), led the team to develop a project that explores ways in which education can help learners confront the consequences of the Colombian armed conflict and strengthen their resilience to violence, and foster human rights and peace education in Colombia.

How can education about the Holocaust and genocide help learners to confront the consequences of the Colombian armed conflict?

Learning about the Holocaust and other Nazi crimes can serve as an entry point for discussion about the conflict in Colombia. For example, it can help explain to learners the processes that lead from stereotyping to widespread violence. These processes can happen anywhere and anytime. Not only in Germany in 1939 or in Colombia today.

In Colombia, many people do not want to talk about the war, because it is dangerous or too painful. It is a very sensitive topic that is often interlinked with personal experiences and trauma. Discussing the crimes committed by the Nazi regime can help to talk about war and violence in a way that allows keeping a certain distance, while still addressing the core problems of targeted persecution and mass violence.

Still, in some places, like in the National Center for Historical Memory, we are careful with applying education about the Holocaust in the context of peace education. It is important that such education is not used to teach about mass violence somewhere else instead of addressing our violent past. Educators should ensure that learners establish clear links between the two events. Like this, education can create an understanding of the consequences of atrocities and their wider impact on societies. Additionally, it can help build the resilience of learners to violence and the drivers of our conflict.

The armed conflict in Colombia is very complex, fought out between guerilla forces, paramilitary groups and government military. The learners´ perspective on the conflict and personal experiences may vary significantly, depending on the background of their families, the cultural practices they are raised with and where they are living. That is why lessons about the conflict need to be carefully adapted and highly context-sensitive. There is no mandatory curriculum covering the conflict, but we are convinced that every child should gain an understanding of the complexity of the war, why it is being fought, and what the different positions of the actors involved are. Most importantly, they have to understand that the solution for existing tensions does not lie in joining an armed group.

Equipped with this knowledge, we hope that learners are motivated to take actions that contribute to addressing the consequences of conflict and building peace in their own communities.

What role does the Colombian education system play in this context?

Colombia has an autonomous education system. That means that every school decides individually about the contents of their curriculum and pedagogical models. Additionally, until December 2017, history class was replaced by a more general social science class, which includes elements of geography, politics and history. This made it extremely difficult to ensure that Colombian students receive the same historical and political education.

On 27 December 2017, the history law was passed, which re-introduced history as an integrated discipline of the social science curriculum.

It remains important that teachers are encouraged to address important topics such as the mass atrocities committed by the Nazi regime and the history of the Colombian conflict in their classroom. The National Ministry of Education has developed many guidelines, but teachers are not obligated to put them into practice. We are therefore trying to stimulate the interest of teachers to put a stronger emphasis on historical and memory education. We want to ensure that people understand that talking about and questioning the past can help learners to take informed decisions for the present and the future.

How does your project contribute to this goal?

Our project aims to unravel the dynamics and logics of the war in Colombia and the links between education about the Holocaust and genocide and conflict education. Together with the Casa de la Memoria Museum and the National Ministry of Education, we have conducted two case studies related to the contribution of education to peacebuilding processes. The first case study is based on the displaced persons camp (DP camp) that was set up in the former concentration camp of Bergen-Belsen in Germany after its liberation. The other case study focuses on education in Colombia today. This research has helped us to compare the two cases and has allowed us to establish important links between the historical experiences in the DP camps and present day Colombia.

One important link is the question of identity. Displacement and persecution can deeply challenge the sense of identity of affected individuals. The reconstruction of identity played an important role in the reconciliation process after the Second World War; likewise, it is an integral part of our peacebuilding process here in Colombia. Another link is the meaning of places. Many DP camps were set up in former concentration camps. Former prisoners of the camp, who stayed in the DP camp had to give the place an entirely new meaning. We can observe similar challenges in Colombia.

The outcomes of the paper were shared with teachers during two workshops on in August in Medellin and Bogota. The participating teachers were chosen based on their previous involvement with the three institutions implementing this project. During the workshops, the teachers discussed the paper, shared their respective experience with peace education and their preferred methodologies and brainstormed strategies for teachers to use in their classrooms to address past violence in a way that contributes to building peace. As part of the workshops, teachers developed new methodologies that were tested and evaluated at the end of each workshop.

Following the two workshops, we will now prepare our own paper to integrate the comments and inputs we have received in the workshops. We then plan to present the paper during a conference in November in Medellin. During this event, we hope to reach a much wider audience of educators and interested students and inform them about education about the Holocaust and genocide in Colombia and in the wider region.

How has the support from UNESCO and the USHMM been beneficial for this project?

Attending the International Conference on Education and the Holocaust (ICEH) was very important for us. We received a lot of valuable information from UNESCO and the USHMM that we can now use for our education programmes and our project.  When we first came to the conference, we did not really know how to use education about the Holocaust for our collective purpose. The National Ministry of Education and the Casa de la Memoria Museum have worked on education about the Holocaust before, but we have never tried to apply it directly to the peacebuilding process in Colombia. We were not sure how to adapt teaching and learning about the history of the Second World War to the context of the armed conflict in Colombia. During the conference, we learned how we could establish these links.

Both, UNESCO and the USHMM, were also immensely supportive during our project development process and gave us very valuable feedback. We are looking forward to keep working closely with UNESCO and the USHMM in preparation of our conference in November!