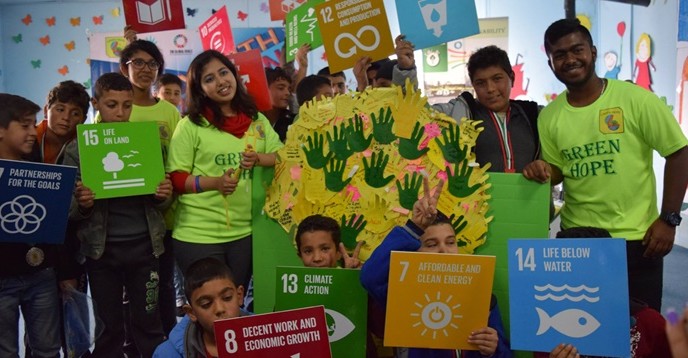 “When I was 7, I saw an image of a dead bird with its stomach full of plastic and that really disturbed me,” says Kehkashan Basu. That's the moment the 19-year-old Founder President of the Green Hope Foundation, counts as the start of her extraordinary bid to do something concrete with her life to protect the planet.

“I decided when I was eight, I was old enough to start doing something on my own, so I planted a tree and there has been no looking back since then,” she said.

The Canada-based Green Hope Foundation was nominated for the 2018 UNESCO-Japan Prize on Education for Sustainable Development for its peer-to-peer approach to educating children and youth across the world about sustainability, the environment and their rights.

At a very early age, Kehkashan - who was then living in Dubai but is now based in Toronto - began talking to peers in schools about what they could do to lead a more sustainable lifestyle. Her profile rapidly grew and she took her first step onto the international stage when she was invited to attend the UNEP Tunza Children and Youth Conference in Indonesia in 2011.

“I was 12 when I went to the Rio+20 Earth Summit in Brazil and I saw that out of 50,000 delegates I was the youngest and there were only 5 others under 18. I really did not like that the summit was preparing for the future without young people who would be most affected. When I returned to Dubai, I started the foundation so young people could give other young people the opportunity and platform to learn about sustainability challenges and mitigate them,” she said.

Online and connected to grassroots

The foundation works as an online international platform uniting more than 1000 young people worldwide who carry out grassroots sustainable development projects in their own communities and meet to share ideas at international conferences and forums. It already has members in 14 different countries with a special focus on marginalized groups including girls, orphans and refugees.

While many young people already committed to the idea of sustainability approach the foundation, it also works to encourage others through its Environment Academies.

“We reach out to schools and talk to students who may not have considered environmental challenges before or may not know what they can do, or have given up hope of making a change,” said Kehkashan. 'We show them the small steps they can take and how each one adds to the global process. When children or youth see someone their own age talking about what they have actually achieved it gives them optimism and hope.”

Community work might include tree-planting, beach clean-ups, waste recycling or conserving fragile eco-systems and endangered species. All of the foundation's work is underpinned with gender equality and peace building.

“We are always trying to bring the Sustainable Development Goals to ground level so people can see that it is possible to work towards those targets,” she said.

The foundation takes an innovative approach to learning, using song, dance, drama and sport, which are particularly effective when working with refugees. Kehkashan has recently worked with Rohingya at a camp in Bangladesh and Syrian refugees in Lebanon.

“When we use creative modes of communication with young people and children, we break the ice faster. If they are not comfortable maybe to stand up and talk or don't have the language of the country they are in, it is easier for them to express themselves through painting, beatboxing, dancing, sport, even making a fashion show,” said Kehkashan.

She has worked also with youth and children in the Sunderbans, the world's largest mangrove forest and an important ecosystem in India and Bangladesh.

“One of the young boys in the group designed and presented a tee-shirt that he had painted and which expressed how he wanted to ensure his home and life were sustainable,” said Kehkashan. “He said he was going to tell his parents not to throw waste in the river that flowed right outside their house and to use organic waste for compost.”

In Bali recently she spoke to children at an orphanage who had lost their parents in the 2002 bombings.

“They came up with a project to plant trees which involved them researching the soil, the best type of trees and season to plant,” she said. “They undertook the entire project including digging in the trees and now their orphanage is circled by their handiwork.”

Currently the foundation adds education for sustainable development (ESD) on a made-to-measure basis but Kehkashan plans for it to be an integral part of school curricula too.

“This is not just an add-on for an enthusiastic teacher or student. Every child should learn about the environment and sustainability,” she said.

Her foundation, which has over 1,000 members across Canada, USA, the Middle East, Suriname, India and Nepal, ensures that agenda-setting and policy-making are also part of the package provided to young people but she believes most strongly in individual grassroots action.

Now an undergraduate in Environmental Studies at the University of Toronto, Kehkashan, who is already a UN Human Rights Champion and winner of the 2016 International Children's Peace Prize and a host of other awards, has two main goals.

“I want to continue to be involved with every one of the foundation's global actions and ensure every single person adopts sustainable living,” she says....”and I want to be the first female UN Secretary General.”

Education for Sustainable Development empowers people with the knowledge, skills, attitudes, values and behaviour needed to think and act for a sustainable future. It is also about including sustainable development issues, such as climate change and biodiversity into teaching and learning. UNESCO promotes ESD at all levels and in all social contexts through its Global Action Programme.