COVID 19 is causing a shockwave around the world and is now the number one concern of the international community. It is fundamental and legitimate to focus on the present of the pandemic. But we must not forget the root causes. It is also essential to think now about the post-crisis, the "reconstruction" phase, which should be about not only health, economic and social issues but also the environment.

In 2019, when the IPBES Global Assessment Report on Biodiversity and Ecosystem Services was published, it was demonstrated for the first time that human activity was responsible for the erosion of 75% of terrestrial ecosystems. Large natural ecosystems are fragmented or destroyed to make way for human economic activity that encroaches on the habitat of centuries-old species, leading to overcrowding that is detrimental to all. For example, in the case of the 2003 SARS epidemic, it was scientifically proven that the civet was the intermediate host and natural reservoir of the virus. In the case of COVID-19, nothing can yet be confirmed, but a consensus among researchers seems to revolve around the pangolin and another intermediate host, the bat, which is known to be a reservoir of the virus. A scientific article published in February in the journal BioRxiv by Zhang et al. (2020) revealed that SARS-CoV-2 shares 91.02% of its genome with strains isolated from pangolins (1). It should be recalled that this highly prized animal in Asia is the most poached species in the world with 100,000 individuals captured per year.

Finally, let us remember that in the case of Ebola fever, whose intermediate host is the bat, the great apes, our closest cousins, have been contaminated and populations have been decimated, sometimes by as much as 95%.

These pressures on biodiversity and its natural habitats, by bringing species closer together, favour the emergence of zoonoses such as COVID-19. It is therefore necessary to take note of these mechanisms now and to draw the consequences in order to avoid a new tragedy. More than ever, we need to rethink our link with nature.

For nearly 50 years, UNESCO, through its Man and the Biosphere (MAB) Programme, has been at the forefront and has been promoting the need to ensure that human activities do not harm nature and that they are interconnected in a way that is not only neutral but positive. Biosphere reserves play a key role in this respect.

Biosphere reserves are laboratories of harmonious interaction between people and nature, allowing for advances in the sciences and in traditional knowledge. They facilitate the sharing of knowledge, promote the interaction between science and society and help bring concrete improvements to the lives of local populations

How can we assist countries in this economic, social and environmental reconstruction? 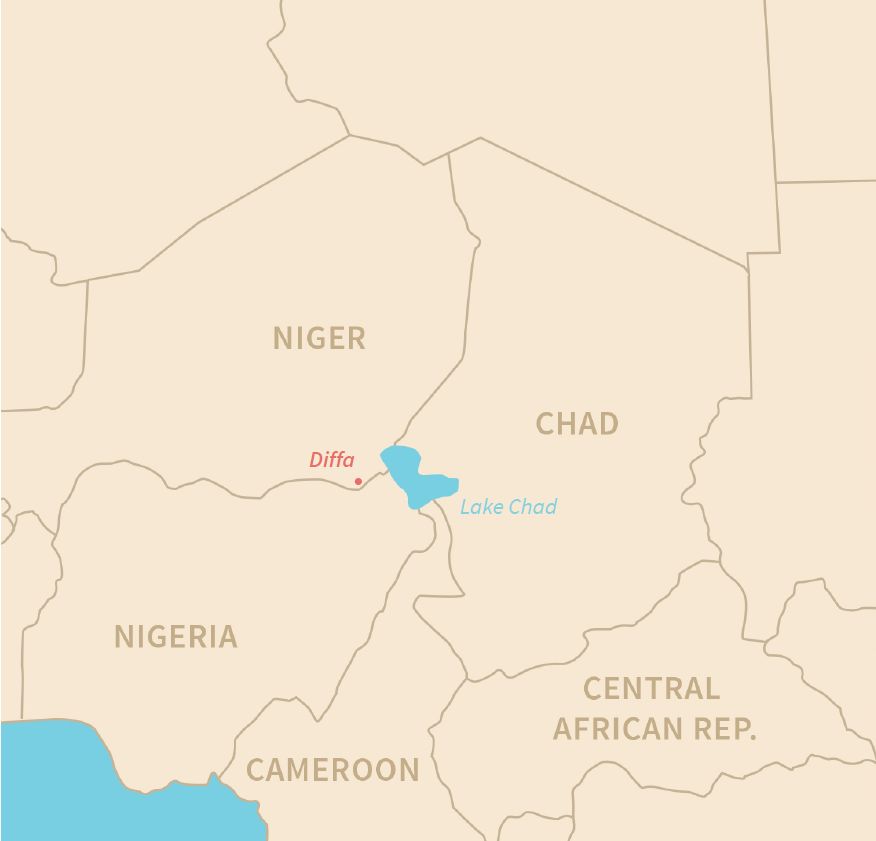 The project BIOsphere and Heritage of Lake Chad (BIOPALT) provides some possible solutions. This project promotes the safeguarding of Lake Chad and the sustainable management of natural resources in favour of peace and the development of communities, especially women, youth and indigenous peoples.

Within this framework, UNESCO is mobilized with these Lake Chad communities, which are among the poorest on the planet, and applies the principles of the MAB Programme in the implementation of income-generating activities (IGAs) based on green economy. These activities are now helping to mitigate the expected socio-economic impacts of the crisis linked to COVID 19.

In Niger, these IGAs strengthen the socio-economic resilience of nearly 30,000 people, including 13,000 women.

Combat deforestation and Oil Extraction from Balanites aegyptiaca for the benefit of youth and women from the village of Boulangou Yakou in the Urban Commune of Diffa.

The Balanites or desert date palm is a tree characteristic of the Lake Chad region with multiple virtues and strongly rooted in the local culture. It slows down soil erosion and is used for food and medical purposes by the communities. Despite this important ecological role, it is not spared the scourge of deforestation. The BIOPALT project has supported the organisation of 12 awareness campaigns for the protection of the species, the carrying out of 2 floristic inventories, the setting up and training of a village environmental protection committee, the training of 90 people and the equipping of 45 women in the production of balanite oil. More than 450 litres of oil are produced each month. The activity is generating an additional income of nearly $19,000 per year for the 45 women benefitting from the project for the first two years, which is significant for people living on less than $2 a day. It is expected to increase.

"The production and sale of Balanite oil has changed my life. It allows me to be more self-sufficient and meet the basic needs of my family. I am very satisfied," says Salamatou, a woman from the village of Boulangou Yakou benefitting from the project.

This pond with a surface area of 5 km² and a depth of 1 to 4 m is an economic lung for thousands of people in the region of Diffa, which has a population of over 300,000 inhabitants. In addition to providing income for fishermen, it allows the development of IGAs linked to market gardening and the exploitation of fruit trees. Its rich biodiversity is illustrated by the presence of several species of fish, some of which have a high market value such as Tilapia. Nevertheless, this pond was subject to a problem of silting up and invasion by Typha australis, which could lead to its disappearance. The BIOPALT project supports local communities in the cutting of 5 ha of Typha australis, the planting of 5,000 Bauhina rufescens plants in quickset hedges to combat wind erosion, the stocking of 20,000 m3 of water with 3,000 fry, the training of 50 people in the production of the plants and the sustainable management of the pond. These activities benefit nearly 22,000 people, including 9,500 women. The annual income from fishing is around USD 35,000.

Creation of a fodder farm (alfalfa) for the preservation of the endemic Kouri cattle breed in the village of Matardé.

The Kouri cow is an endemic species of the Lake Chad region. It confers prestige and is a source of pride for breeders. It maintains a centuries-old tradition of nomadism strongly rooted in the cultural identity of local communities. Nevertheless, this species is weakened by the shrinking of the lake as it does not tolerate the dunes and arid areas resulting from the drought witnessed by climate change. In addition, the fragile security situation in the area of the lake's islands is causing herders to retreat to the mainland. The BIOPALT project supports the training of 100 people in the production, exploitation and marketing techniques for alfalfa eaten by herds, the construction and equipment of a fodder farm on 5 ha, and awareness raising on the prevention of conflicts between farmers and herders related to access to pastures. Thanks to this farm, milk production has increased (10l/day/cow) which offers more opportunities for the sale of by-products (butter, curdled milk), particularly by women. The same is true for the market value of the Kouri cow, which reaches up to USD 1,100 per unit. Nearly 5,000 people benefit from this activity.

Rethinking our relationship with nature

These diverse locally manageable green economies with short circuits are examples of nature-based solutions contributing to biodiversity conservation, poverty reduction and sustainable development in the Lake Chad area where communities' livelihoods and security are intimately linked to their surrounding biological resources. They will be a bulwark to better withstand the economic consequences of COVID 19 and to prevent such crises in the future.

This health crisis shows us that environmental degradation and human "predation" on biodiversity, if allowed to continue, will lead humanity into an increasingly bleak and uncertain future. This inescapable fact, like that of climate change, must remain at the heart of our reflections even when the danger is over. In the "reconstruction" phase, countries will have to fully integrate biodiversity conservation and human development as advocated by the approaches of the MAB Programme and biosphere reserves for almost half a century.

Lake Chad and its basin are the economic and ecological lungs for more than 45 million women, men and children. Shared between Cameroon, Niger, Nigeria, Central African Republic and Chad, the area abounds with exceptional biodiversity symbolized by the presence of biosphere reserves, World Heritage sites and wetlands of international importance (Ramsar sites). The region is the cradle of a thousand-year-old civilization and a formidable unifying element between the communities of North Africa and the ones just south of the Sahara. It has always been a place where cultures have converged and intermingled. Over the last four decades, the surface area of Lake Chad has decreased considerably. It decreased by more than 90% between 1960 and 1985 due to the drop in rainfall, l which has not been compensated by the rising water levels observed since the 2000s. This has led to significant imbalances and a weakening of the ecosystems. The region faces other environmental challenges such as biodiversity conservation, deforestation, drought, desertification and land degradation. In addition to this environmental crisis, there is a security and humanitarian crisis marked by the rise of violent extremism and significant population migration. In response to this situation, UNESCO and the Lake Chad Basin Commission have joined forces to implement the BIOPALT project with funding from the African Development Bank through ADF funds. This project was launched in 2018 for a period of three years. Income-generating activities based on green economies in Niger are implemented in partnership with the UNDP Small Grants Programme.