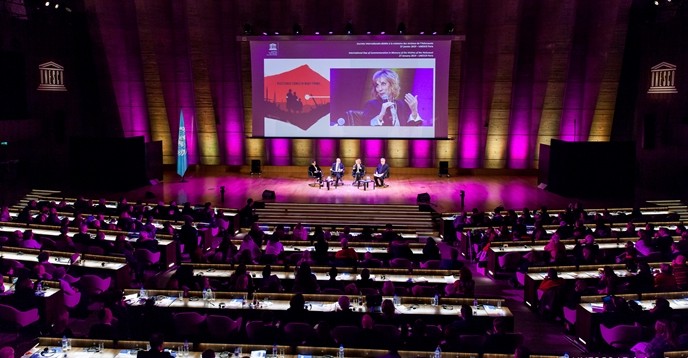 On the occasion of the 2019 International Day of Commemoration in Memory of the Victims of the Holocaust, UNESCO, in partnership with the Shoah Memorial in Paris, Abramorama and Katahdin Productions, organized a commemorative ceremony, a global screening of the recently released feature documentary Who Will Write Our History, and a follow-up panel discussion.

The commemoration event took place at UNESCO’s headquarters in Paris on Sunday 27 January 2019 in the presence of UNESCO Director-General Audrey Azoulay, the President of the Shoah Memorial Éric de Rothschild, the film director Roberta Grossman, the executive producer Nancy Spielberg, and the historian and writer of the book Who will write our history? Samuel Kassow. Stephen Smith, Executive Director of USC Shoah Foundation and UNESCO Chair on Genocide Education, moderated the ceremony and the panel discussion.

The event opened with a commemorative ceremony, which included speeches by Ms Azoulay and Mr Rothschild, and prayers led by chief rabbi Olivier Kaufmann.

In her opening remarks, Ms Azoulay reiterated UNESCO’s historic mission to preserve and build peace first in the minds of women and men following the atrocities of the Second World War and outlined the international civil society’s duty to preserve and transmit the memory of the Holocaust. Ms Azoulay framed the necessity of this remembrance duty in light of the contemporary surge in antisemitism across Europe and reasserted the importance of Holocaust and genocide education.

Ms Azoulay said: “Preserving and passing on the history of the Shoah, against discourses which exploit ignorance,  is, again and again, three generations after the fact, abiding by our duty to the victims, preventing the worst from being repeated by studying the mechanisms that made it possible and continuing to combat this contemporary antisemitism which persists in sullying the memory of the dead.”

The film was simultaneously screened in over 50 countries and 330 venues in all regions of the world, including UNESCO Field Offices and United Nations Information Centres.  The ceremony and the panel discussion were conducted in live link-up with the United States Holocaust Memorial Museum in Washington, D.C., the Museum of Tolerance in Los Angeles and the Emanuel Ringelblum Jewish Historical Institute in Warsaw. A mini Facebook LIVE featuring Ms Grossman, Ms Spielberg and Dr. Kassow simultaneously streamed throughout the event.

The audience, both at UNESCO HQ and worldwide, also enjoyed video interventions from Steven Spielberg, film director, Piotr Cywinski, Director of the Auschwitz-Birkenau Museum and Marian Turski, Chairman of the Museum Council for POLIN Museum of the History of Polish Jews.

The feature documentary is the first film in history to tell the story of the courageous women and men of the clandestine group Oyneg Shabes who worked tirelessly – and at great risk – to put together 25,000 pages of archives in the Warsaw Ghetto established by Nazi Germany. Led by historian Emanuel Ringelblum, the group, composed of intellectuals, community leaders and social workers, collected thousands of testimonies, essays, drawings and arts pieces between 1940 and 1943, creating a documentary record of the wartime fate of Polish Jewry.

As one of Europe’s most inestimable archives, the “Ringelblum Archives” were included in UNESCO’s Memory of the World Register in 1999.

This dangerous yet powerful endeavour was all the more necessary that the Oyneg Shabes group knew that the history of the Holocaust – and therefore their own personal story – should be told through their own viewpoints, and not through the Nazi propaganda machine.

In the words of David Graber, a teenager and a member of the Oyneg Shabes group: “What we were unable to shout out to the world, we hid under ground. May this treasure end up in good hands, may it live to see better times, may it alert the world. May history be our witness."

The event concluded with the 1100-strong audience taking a photograph with the sign #WeRemember as part of a social media campaign led by the World Jewish Congress, a partner of UNESCO in Holocaust education and combating antisemitism, to keep the memory of the Holocaust alive.

Several UNESCO Field Offices participated in the global screening event, which was met with great success.

In cooperation with the Embassy of Germany in Ethiopia and the Embassy of Poland in Ethiopia, UNESCO-IICBA in Addis Ababa organized a screening of the film in the presence of the Israeli, German, Polish and Portuguese Ambassadors to Ethiopia.

The immediate response was very positive and enthusiastic. For Khaled, an attendee from Sudan, the main takeaway from the film was “the importance of documenting atrocities while they are happening, because it does determine how you’ll be seen in history. It’s better to take control of the narrative that is happening to your people, then letting it to whoever might be the victor of conflicts to say that.”

Sara, a student from Ethiopia, said that she learned that "when stories get written they have so many perspectives and we should not try to see these stories only by one person’s perspective but by many". She continued to explain that "the past is so important... and people are scared that the past is going to come back."

The UNESCO Office in Yaoundé organised, in partnership with MUNA Foundation and the United Nations Information Centre in Yaoundé, a film screening together with the opening of a photography exhibition entitled “The Children of the Holocaust”. The ceremony also entailed a poetry recital and a theatrical performance by student members of UNESCO Clubs.

The event took place in the presence of the Israeli Ambassador to Cameroon and gathered an audience of students, teachers, and traditional chiefs from the North-West Region of Cameroon.

In Dakar, Senegal, a public screening event was held at the Museum of Black Civilizations and was organized by the UNESCO Regional Office for West Africa, the Senegalese National Commission for UNESCO, the United Nations Information Centre, the Office of the United Nations High Commissioner for Human Rights in Dakar and Rosa Luxemburg Stiftung.

The audience had the privilege to hear a powerful account by the Israeli Ambassador to Senegal. His Excellency Roi Rosenbilt shared the story of how his own grandmother, a survivor, was confined to the Warsaw Ghetto, then deported to Chelmno concentration camp and finally to Majdanek death camp. He concluded his remarks on the utmost importance to contribute to preventing such ideas of hatred from prevailing again.