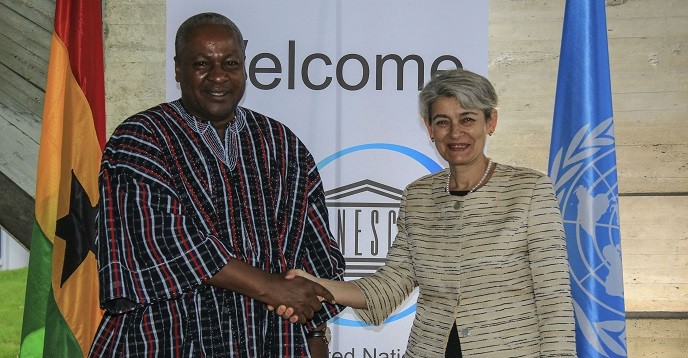 The President of Ghana, John Dramani Mahama, today paid an official visit to UNESCO where he met the Director-General of the Organization, Irina Bokova, and addressed representatives of the diplomatic community and of Ghana’s civil society.

In her welcoming address, the Director-General praised the President’s commitment for democracy and good governance, and his country’s increase in public expenditure on education, which “has led to a significant increase in pre-primary and primary enrolments. This has catalyzed progress towards gender equality, the empowerment of girls and women,” Ms. Bokova said.

The Director-General also welcomed the fact that Ghana last July ratified all six UNESCO culture conventions, as well as the UNIDROIT Convention.

“At this time when across the world culture is under attack, when cultural diversity is under threat, I believe Ghana is sending a powerful message to all, about the need to unite around humanity’s shared heritage, around human rights and human dignity.”

In his address, the President of Ghana declared, “UNESCO has in the last 70 years impacted the lives of many across the world through education, the sciences, culture, and information and communication technology.”

“The World appreciates the work UNESCO continues to do, despite the current financial limitations and new forms of challenges such as the destruction of cultural heritage sites, the looting and sale of cultural heritage artifacts by terrorist groups,” he said, noting that UNESCO is currently celebrating its 70th anniversary.

Describing the destruction of heritage as “truly disheartening,” President Mahama pledged support for UNESCO’s #unite4heritage social media campaign and the Bonn Declaration issued by the World Heritage Committee in July this year.

The President emphasized his country’s efforts to extend universal free education and harness the potential of information and communication technologies to this end. He invoked his country’s commitment to the newly adopted sustainable development goals and cautioned that “if we are to attain the objective of a sustainable consumption and production pattern under Goal 12, then it will be necessary for us to review the relations between labour, production and capital.”

Also during the visit, Foreign Affairs Minister Hanna S. Tetteh and the Director-General signed a joint communiqué highlighting priority areas of cooperation between UNESCO and Ghana. They highlighted promoting the empowerment of girls and women through information and communication technologies; upstream cooperation to prepare the future inscription of World Heritage sites in Ghana and funding for the ongoing General History of Africa project.