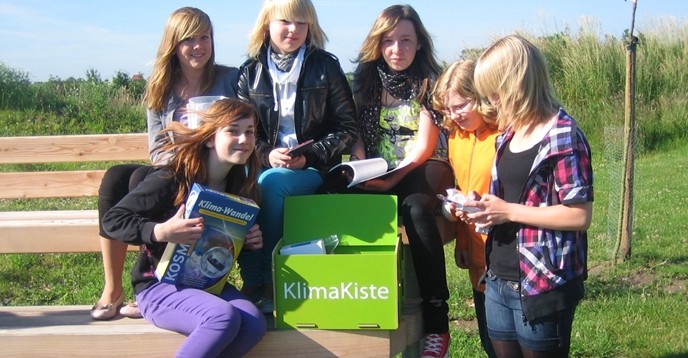 ‘We are trying to break the rules in a constructive way and free some space in school timetables and students' minds to see what sustainability ideas they fill it with’ said Silke Ramelow, Chairwoman of BildungsCent, an NGO working to change teaching and learning through education for sustainable development (ESD).

Their transformational projects, which take place in schools across Germany, include, among other things, an activities box for schools, an art project, which allows students to build a creative approach to solving climate change, and 'SWAP' which turns the tables by having students teach their teachers on sustainability topics.

BildungsCent has been working for close to 20 years and came into force after the 2000 PISA study (Programme for International Student Assessment). Germany surprisingly failed to score as well as expected and it was understood that schools would have to change their approach in order to give students an education fit for the future.

In 2008, with climate change becoming an ever more urgent topic, the German Government released funding to improve sustainable development education.

‘There was a need in general for future-oriented education that was connected to real-life experience rather than one that was solely oriented around passing exams. We were already working with schools so were well placed to partner with the Ministry of Environment to address the need for change in relation to the teaching of sustainable development,’ said Silke.

Their highly successful programme AktionKlima! which reached 2,200 schools began simply by giving them large green boxes - the ‘KlimaKiste’ (climate box) - filled with tools, inspiring materials and further information to engage children in recording their surroundings with respect to sustainability.

‘We offered such a large portfolio of possibilities through the programme that everyone could find their own starting point. We were already changing the conversation by offering a positive approach rather than one that focuses on an impossible problem and calls for rebuilding the entire school!’ she said.

The programme, which was nominated for the UNESCO-Japan Prize on ESD  in 2018, placed advisers in schools for 4-month projects and after that time offered further help and support. This was followed up with a mobile version of the climate box, which students could take to marketplaces or town halls, thus involving public stakeholders in their activities. Around 500 schools worked with as many partners on this stage of the project and reached businesses and municipalities as well as individuals.

Sowing the seeds of lasting change

The next project, KlimaKunstSchule (ClimateArtSchool) involved 50 artists going into 200 schools to work directly with students.

‘We wanted to see what happened when students were introduced to the creative process not necessarily to produce an art work but to explore how to think differently about problems and solutions to climate change and protection,’ said Silke. ‘The change in thinking was remarkable with students suddenly opening their minds and asking themselves "what can I do about this?"’

The transformative process, which created new narratives and changed the way students viewed themselves was taken a step further with ‘SWAP’.

‘We became more courageous and decided to work with 5 schools training the students to teach their teachers on different sustainability topics,’ said Silke. ‘We ran workshops for the students only and asked them what they thought about how they were taught about green issues. They said the main problem was that their teachers did not have sufficient knowledge on the subjects they were trying to teach.’

Their first topic under the heading of biodiversity was plastic in the seas with students receiving guidance on content and teaching methodology, mixed media and on developing a learning plan and schedule.

‘At first there was a period of cognitive dissonance with teachers not finding their new role and adapting to new routines but as things evolved the level of content and the methods used were both wonderful. The students and teachers really changed during the process. The level of innovation was high with students using props such as vegetable bags made from netting filled with fabric animals to illustrate the serious consequences of plastic in the sea on plants and animals,’ she said.

The next topic to be tackled in the same way will be food and climate change.

‘It is amazing how much can be achieved in just two days of workshops with 8 to 15 students per school,’ said Silke.

Another interesting idea has been to hold a ‘Primary School University’ where the difficult and demanding topics related to sustainable development are addressed in primary schools. Lectures are organized and implemented by the students and supported by BildungsCent. Scientists and other experts are invited to explain these topics and parents are welcome too.

‘Our work is really about making new and free space for students to find out what their deep needs are in relation to sustainability.

‘Our aim is to provide schools with inspiration and concrete opportunities for action. Change in terms of sustainability is not only about new content. To become effective, new content needs new and unconventional forms and methods.’

Education is the most powerful element in preparing societies for the global challenges that climate change brings. It equips leaners of all ages with the understanding, skills and attitudes to engage in shaping green, low emission and climate-resilient societies. UNESCO promotes Climate Change Education as part of its Education for Sustainable Development (ESD) programme and advocates at international level for ESD as an integral part of any strategy to combat the effects of climate change.