How can Education for Sustainable Development (ESD) learning experiences help specific sustainable development challenges in economically disadvantaged communities? How can we focus on values, attitudes and life style change, innovative pedagogies and technology‐based learning environments, in the context of developing countries and people facing economic challenges?

To discuss these issues, UNESCO gathered international experts and local stakeholders from 13 to 15 June in Stellenbosch, a city in the Western Cape province of South Africa, situated about 50km east of Cape Town.  This is a third  symposium, in a series of four, on the future of ESD.  The symposia are designed to generate new ideas and to ensure ESD’s relevance and continuity beyond the Global Action Programmed (2015-2019). A number of informal settlements are situated in the region, including Khayelitsha, one of the world’s largest informal settlements, and Enkanini township. Both townships were visited as highlights of the symposium. 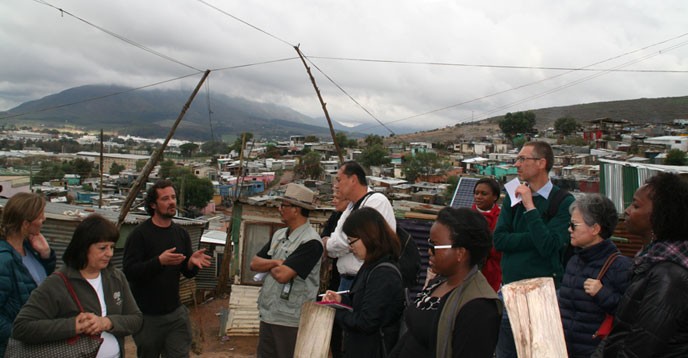 The three-day event encouraged free thinking, dialogue and sharing stories, narratives and perspectives among local actors and outside specialists from different disciplines. They discussed the relevance of current modes of ESD in the context of poverty and the issues to be addressed by UNESCO’s work on the future of ESD.

People cooperate out of necessity to survive

On the first day, the participants gathered at the Sustainability Institute, a learning centre in Stellenbosch to learn about the historic background of the region and the work of the institute. In short, urban planning has failed to meet the needs of a population that grew to an unexpectedly large number during and after Apartheid, resulting in over-crowded housing, poor living conditions and high levels of crime and violence in the townships.

The group then visited Kayamandi high school, next to the Enkanini Township with 8,000 households. The teachers explained the difficulties they face teaching in this community. “Children’s lives outside of school  are mainly about survival", said one. “Educational activities tend to be confined to the school classroom, because children cannot continue them outside.“ This reflects the absolute necessity and importance of the contextualizing education programmes, especially in economically-challenged environment.

During the visit of Enkanini Township, Berry Wessels, the chairperson of the Enkanini Research Centre showed participants the iShack Project. It is using solar electricity to demonstrate the potential for green technologies to improve townships and informal settlements, and to build local entrepreneurship capacity and resilience within the community. Since its establishment in October 2013, the iShack Project has delivered electricity to over 1,000 households. “People are motivated to cooperate with the sustainable project out of necessity to survive,” he explained, emphasizing the need to review and rephrase the sustainability related programmes and ESD programmes more tangible for the public within their life and sphere and daily life. 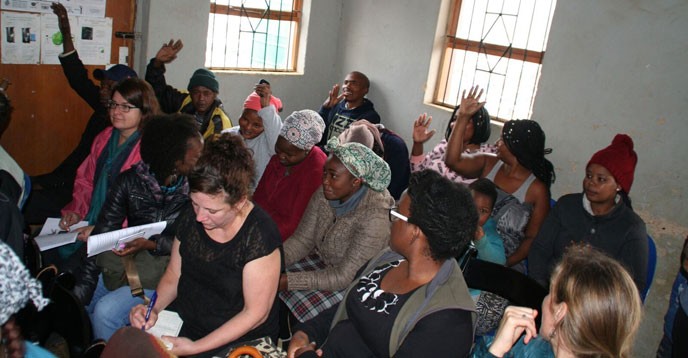 ESD need to deal with urban planning, condition of living

On the second day, the participants visited Khayelitsha Township, one of the largest slums in the world and one of the fastest growing townships in South Africa, with an estimated population of more than 2 million people. 40% of its residents are under 19 years old; only 7% are over 50. Khayelitsha is one of the poorest areas of Cape Town. Roughly over half of the households live in informal dwellings.

The local leaders of the Informal Settlement Network (ISN), an alliance of organizations dealing with poverty issues, gave a presentation in which they emphasized the need for ESD to address a wider range of sustainable development issues such as urbanization, exploitation, land, displacement, inequality and violence and insecurity. They also expressed the strong needs of basic health education, vocational programs, and education to deal with urban planning to ameliorate the condition of living in the township.

One of the highlights of the symposium was a visit to the primary school in Khayelitsha township, which accommodates 1100 children. About 20 children were invited to talk with the participants. When asked of their dreams for the future, one girl said “I want to become police because my mom was robbed.” Other student also added, “I want more safety in the community. I don’t want people to assault others and do better for children.” It again reaffirmed the need for ESD to address the pressing sustainable development issues such as violence and insecurity in the community and empower the people to make a difference for themselves.

SDG4 and SDG17 cross cuts the rest of the 15 goals

On the third day, the participants of the meeting reaffirmed the importance of ESD to address the basic fundamental issue of human dignity and human rights. Few raised a question to redefine the definition of ESD to including further issues such as quality, governance, integrated context in order to integrate livelihood of people, especially the most vulnerable people. Others said that a better linkage between the community and the school should be explored.

As professor Arjen Wals, UNESCO Chair of Social Learning and Sustainable Development pointed out, “There’s a unique opportunity for ESD with the 17 Sustainable Development Goals since SDG 4 on education and SDG 17 on partnership cross cuts the rest of the 15 goals.” The rising demand for the future of ESD to be more “relevant, responsible, responsive and reflective” rings true in the context of poverty.

Professor Heila Lotz-Sisitka, a South African National Research Foundation Chair in the Environmental Learning Research Centre at Rhodes University, added. “South Africa is a microcosm of the world – multimillionaires versus poverty. We have to spend time talking not only of poverty but also the issue of the distribution of wealth. South Africa can be seen as a laboratory of the world.”