The network recognised Ms Jane Tallim and Ms Cathy Wing of MediaSmarts in Canada, Jordan Media Institute in Jordan, Mr Hemmo Bruinenberg in the Netherlands, and the Autonomous University of the State of Morelos, Mexico.

The Awards ceremony was held at the Opening Session of the Global MIL Week 2018 Feature Conference in Kaunas, Lithuania.

Jane Tallim and Cathy Wing of MediaSmarts received the top prize. They have been central to MIL in Canada since they joined MediaSmarts in 1995. They both served as co-executive directors from 2008-2018. During that time, they were responsible for Young Canadians in a Wired World, one of the world’s largest and longest-running research projects on youth and the Internet. They also developed the resource, Use, Understand and Create: A Digital Literacy Framework for Canadian Schools.

Under Jane and Cathy’s leadership, MediaSmarts has also contributed to the adoption of media and information literacy in Canada by advising on curriculum and by training teachers, both personally and through the creation of self-directed professional development materials.

There was a tie for the second place of the GAPMIL Global MIL Award 2018 between the Jordan Media Institute and Hemmo Bruinenberg from the Netherlands.

In partnership with UNESCO and the European Commission, Jordan Media Institute launched a project to integrate MIL into Jordan's schools and universities and raise awareness among the public in 2016, and has been actively engaging decision makers in advocating for MIL and succeeded in including MIL in national strategies on youth and combating extremism and violence at universities.

Through this partnership, JMI trained 74 teachers and professors and 390 students from eight public schools and two universities. Some of the teachers and students have set up MIL Clubs for students in grades 7-9.  The JMI team drafted six documents that were based on UNESCO MIL literature including a policy paper and syllabus for schools and textbook for universities. They also succeeded in encouraging the University Al Al-Bayt to introduce MIL course this fall. 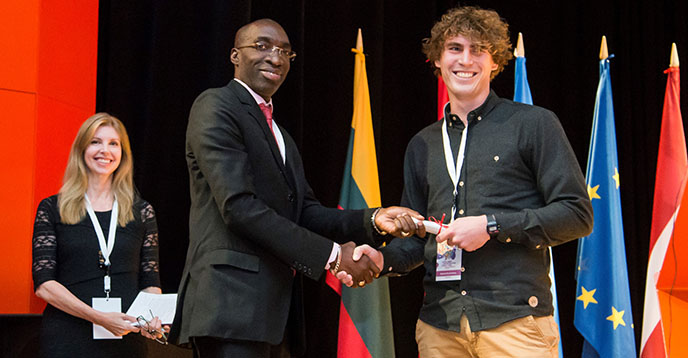 The other winner of the second prize, Hemmo Bruinenberg introduced a visual literacy project called Ithaka Film Festival led by his organization the Video Bakery and the Ithaka International Transition Classes. Over a three-day period, immigrant and refugee students make their own film with professional equipment from extensive research to the media creation and production.

Students not only work on media and information literacy skills, but also as social skills, empowerment, Dutch language and therefore facilitating their integration in Dutch society. The Ithaka Film Festival shows how a media and information literacy project can contribute to the development of skills among a vulnerable group of young students, and how MIL can be integrated in secondary school education in a sustainable way. The project promotes tolerance and cultural equality a better representation in Dutch society.

According to Alton Grizzle, the UNESCO Programme Specialist with responsibility for UNESCO global actions on MIL, “recognition by GAPMIL motivates, stimulates, and appropriates the sharing of MIL experiences and knowledge.” He continued: “When the hard work and innovation of actors in the MIL is celebrated by the community, this creates new MIL champions.”

The third place for the GAPMIL Global MIL Awards goes to the Autonomous University of the State of Morelos (UAEM), Mexico. UAEM initiated a Massively Open Online Course (MOOC) aimed at promoting information literacy to fight disinformation. The University is using e-learning and ICT to meet not only the needs of its students and educators, but also of the wider society in Mexico and in the Spanish Speaking part of the world.

A total of 2,775 participants registered in the first edition of this MOOC and it has potential for future editions. It educated people to develop competences as critic and reflective news consumers, and to promote harmonic interactions in social media. All content for the MOOC is originally produced by e-UAEM, and this course is part of the university’s Digital Culture Programme.

The UNESCO-led GAPMIL is a network of networks that promotes international cooperation to ensure that all citizens have access to media and information competencies. It currently has over 500 member organizations (including other networks) from over 110 countries.