The Future We Want: A Healthy Ocean for Prosperity in the Western Pacific 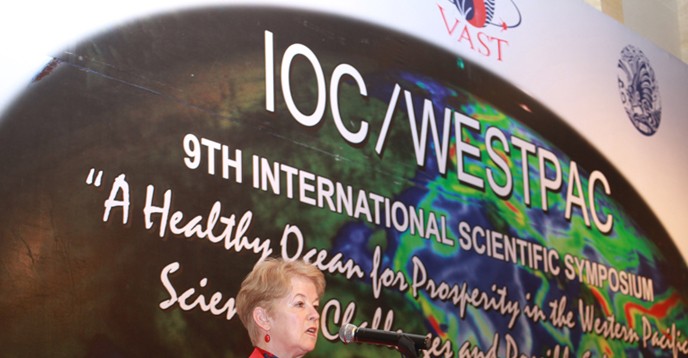 Close to 600 marine scientists participated in the 9th WESTPAC International Scientific Symposium entitled “A Healthy Ocean for Prosperity in the Western Pacific: Scientific Challenges and Possible Solutions”. Government officials from 24 countries within and outside of the region also attended the 4 day Symposium, which concluded on 25 April 2014.


Through 6 keynote lectures, 14 sessions, and 9 workshops, the Symposium focused on four themes:

One of highlights was the Joint Directors’ Statement adopted towards the attainment of the future we want: “A Healthy and Safe Ocean for Prosperity in the Indo-Pacific region”, adopted during the open-ended Research Directors’ Forum organized on 22 April 2014 for Directors from marine scientific institutes, academic faculties and/or operational agencies in the Indo-Pacific.

The Statement calls for urgent action to establish the Indo-Pacific Ocean Observations and Services Network (IPON); the creation of the Scientific Steering Committee for Indo-Pacific Ocean Observations and Services Network (SC-IPON) as an arm to guide the development of IPON; and heightened recognition from IOC/UNESCO Member States, regional leadership and policy decision makers on the need to establish IPON.

It also calls upon the marine scientific communities to undertake further research on, and sustained observations of, the ocean processes and climate, earth dynamics, and the impacts of climate change and anthropogenic activities on vulnerable marine biodiversity and ecosystems; as well as increased assistance to developing nations in the Indo-Pacific region, including Small Island Developing States (SIDS); and enhanced efforts to build capacity developing nations in the Indo-Pacific region, in particular through the development of technical assistance programs and materialization of the “IOC Regional Network of Training and Research Centers on Marine Science”.

Five WESTPAC Best Young Scientists were also selected from all oral and poster young scientist presenters in order to encourage young marine scientists to devote themselves to marine science, sustained observations and services underpinning the sustainability of ocean and coastal resources to benefit all.

This Symposium was hosted by the Government of Vietnam, through its Vietnam Academy of Science and Technology (VAST), jointly organized in Nha Trang coastal city by the Institute of Oceanography, VAST; the National IOC Committee for Vietnam; and the IOC Sub-Commission for the Western Pacific (WESTPAC).

One Planet, One Ocean