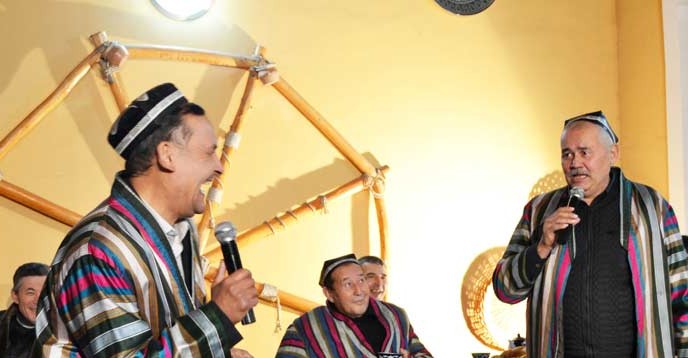 The Turkish art of paper marbling, Vietnamese popular songs and askiya, the Uzbek art of jocular dialogue are among the five elements added to the Representative List of the Intangible Cultural Heritage this afternoon.

The Representative List includes elements that demonstrate the diversity of this heritage and raise awareness about its importance.

The following new elements were inscribed this afternoon:

In Serbia, families, neighbours and friends celebrate a holiday in honour of the Orthodox Christian patron saint, Slava. A specially designed candle is lit in the family home, and wine is poured over a Slava cake, which is then cut crosswise, rotated and broken into four parts and lifted up. Women play an important role in transmitting knowledge within families concerning the performance of rituals, their meaning and purpose. The Slava feast reinforces social relations and encourages dialogue in multi-ethnic and multi-confessional areas.

Kopachkata, a social dance from the village of Dramche, Pijanec (The former Yugoslav Republic of Macedonia)

Kopachkata is a dynamic and energetic social dance performed by residents of Dramche, Pijanec. It is danced in a semicircle at weddings, public gatherings and religious festivals. The dance starts with a slow-paced walk that accelerate to swift short steps and and foot stamping. For local audiences, the Kopachkata dance is a symbol of cultural identity, not only of the community of the village of Dramche, but for the wider Pijanec region.

Ebru is the traditional Turkish art of creating colourful patterns by sprinkling and brushing colour pigments onto a pan of oily water and then transferring the patterns to paper. Known as marbling, this art is commonly used for decoration in the traditional art of bookbinding. The knowledge and skills of Ebru artists, apprentices and practitioners are transmitted orally and through informal practical training of apprentices by master craftspeople. Ebru encourages dialogue, reinforces social ties and strengthens relations between individuals and communities.

Askiya, the art of wit  (Uzbekistan)

Askiya is a genre of Uzbek verbal folk art that takes the form of a dialogue between two or more participants, who exchange witticisms around a particular theme. Bearers and practitioners, mainly men, must master the particularities of the Uzbek language, and be able to improvise and reason quickly and skilfully, using humour and banter to great effect. The dialogues, although humorous, play an invaluable role in raising awareness of social tendencies and events, drawing attention to important issues through acute observation of daily life.

Ví and Giặm songs are performed by communities in north-central Viet Nam. They are sung while people cultivate rice in the fields, row boats, make conical hats or lull children to sleep. Songs focus on key values and virtues including respect for parents, loyalty, care and devotion, and the importance of honesty and a good heart. Singing provides people with a chance to ease hardship while working, to relieve sorrow in their lives and to express sentiments between men and women.