Finding their voices: Citizen journalists have their say in Cambodia 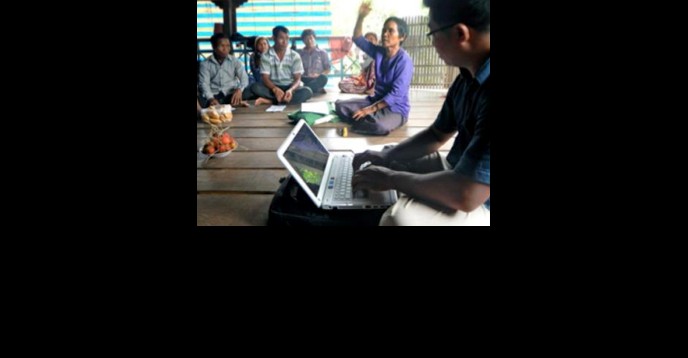 An elderly Cambodian woman in Preah Vihear province says that a recent citizen journalism training programme, organized with UNESCO’s support, left her feeling empowered. “We dare to speak out because we now understand freedom of expression and related rights,” she said during a focus group discussion on the training programme, which was also held in Mondulkiri and Ratanakiri.

The project, “Sustaining community and media participation in promoting freedom of expression in Cambodia,” aims to aid marginalized members of society, particularly women and ethnic minority groups, in making full use of their right to freedom of expression and information through both broadcasting and social media.

The project is operating with the support of the UNESCO International Programme for the Development of Communication (IPDC) and the Cambodian Center for Independent Media (CCIM).

Until now, 60 people in the three target provinces have been trained as citizen journalists, acquiring reporting skills that they can use to raise awareness around alleged human rights violations. Already these citizen journalists have produced 22 news reports, which have been broadcast through CCIM radio stations and other local radio outlets in five cities and provinces in Cambodia.

Networks have also been strengthened between media outlets and community members in order to encourage dialogue, transparency and good governance. Three participants in the training programme have been invited by CCIM to work as freelance journalists.

As bonds strengthen between citizen journalists and media outlets, those in marginalized communities are becoming increasingly aware of current affairs, participating in community development and making informed decisions to ensure that the officials representing them are accountable.

According to Morm Kanha and Rath Rachana, citizen journalists from the Brome community, the changes are already apparent. “By adhering to ethical journalistic standards, we have more power when we demand information from local authorities,” they wrote.