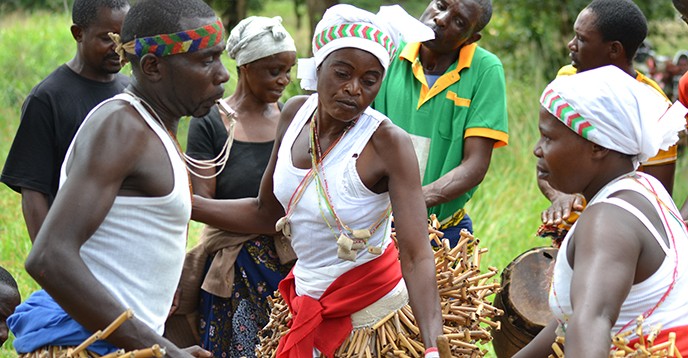 The Representative List seeks to enhance visibility for the traditions and know-how of communities without recognizing standards of excellence or exclusivity.

The newly inscribed elements are:

Malawi—Mwinoghe, joyous dance—Mwinoghe is an instrumental dance performed in three ethnic communities in northern Malawi. In the Chisukwa dialect, mwinoghe literally means ‘let us enjoy ourselves’ and the dance is indeed expressive of joy and happiness. Dancers line up in two rows (men on one side, women on the other), and perform elaborate twisting body and foot movements to the sound of three drums, a whistle and the group leader’s commands. People from all walks of life gather to watch the dance, which is performed at social gatherings and on days of national significance.

Malaysia—Dondang Sayang—Dondang Sayan is a traditional Malay art that combines elements of music (violins, gongs and tambourines or tambours), songs and chants, featuring beautiful melodious strains of poetry. Based on tradition, Dondang Sayang performances are accompanied by music and sung by two singers of the opposite sex, who sing in quatrains. Performances are open to all, and the art strengthens community bonding by conveying positive messages and sharing feelings of love, joy and sorrow. Performances are held regularly, especially during gatherings, festivals and parties.

Mexico—La Romería (the pilgrimage): ritual cycle of 'La llevada' (the carrying) of the Virgin of Zapopan—The annual celebration on 12 October of La Romería, honouring the image of the Virgin of Zapopan, dates back to 1734. The day marks the final phase of the annual ritual cycle popularly known as ‘The Carrying of the Virgin’, which begins in May and includes many community and liturgical activities. The cycle ends with the return journey to the Basilica, in Zapopan, with the participation of more than two million people. Throughout the year, different communities work together to plan the event, helping to reinforce social ties.

Oman—Horse and camel Ardhah—Horse and camel Ardhah is practised across many regions of Oman. On Alardhah day, people gather around the racecourse to enjoy the showmanship of horse and camel riders. Other artistic performances such as recitals of traditional poetry are held alongside the main show. Alardhah starts with a series of traditional acts followed by a parade of horses and camels draped in decorative cloth. Alardhah reflects Omani people’s skill in taming and training horses and camels, and their devotion to the care of animals.

Panama—Ritual and festive expressions of the Congo culture—The ritual and festive expressions of the Congo culture encompass the contemporary vision of a collective celebration of the descendents of black rebels enslaved in the colonial period. During the Congo season, participants use a palisade to stage a matriarchal society ruled by a queen and her court. Everyone must help protect the queen and members of the palisade from the devils (diablos), and the season concludes with a confrontation between the diablos and the Congos. Everyone takes part in the festival, which has contributed to social integration over generations.

Poland—Nativity scene (szopka) tradition in Krakow—The Nativity Scene (szopka) tradition of Krakow is a practice originating from Christmas celebration customs focusing on the construction of cribs. The szopka is a lightweight structure featuring the scene of the nativity surrounded by representations of houses and monuments of Krakow. Other scenes are also represented depicting historical and contemporary cultural and social events. On the first Thursday of December, makers gather on Krakow Main Square to present their work. The practice has important educational functions, passing on knowledge about the history of the city, its architecture and customs.

Serbia—Serbia - Singing to the accompaniment of the Gusle—Singing to the accompaniment of the Gusle – a simple string instrument – is an ancient art of performing primarily heroic epics. Performances are carried out by soloists (guslars) who engage the audience in a complex form of interaction. Covering a wide range of topics, from archetypal motifs to historical themes and modern life, the songs reflect the community’s value system. Local organizations are assembled around the Union of Guslars of Serbia, which has established the Festival of Young Guslars and the Assembly of the Young Guslars of Serbia.

Slovenia—Bobbin lacemaking in Slovenia—The handicraft of bobbin lacemaking in Slovenia consists of the skilled crossing and twisting of thread wound on special wooden sticks known as bobbins. Using locally recognizable patterns with local names, bobbin lacemakers produce lace in bands or in finished shapes. Their production serves to adorn clothing and fashion accessories, church and home textiles and representative spaces. It is furthermore an inspiration for artistic creations more generally. The practice has notable therapeutic functions and is most frequently passed down from grandmothers to grandchildren.

Spain—Tamboradas drum-playing rituals—Tamboradas drum-playing rituals are loud, group rituals based on the simultaneous, intense and continuous beating of thousands of drums, played uninterruptedly for days and nights in public spaces in towns and villages. The tamboradas are part of the celebration of Catholic Holy Week, and take on specific significance according to the place, day and time they are performed. Everywhere, they create a captivating landscape of sound and identity in an atmosphere charged with an intense feeling of collective communion and mutual respect.

Switzerland, Austria—Avalanche risk management—Avalanche risk management has shaped the identity of Alpine populations, who over the centuries developed local empirical knowledge, management and risk-avoidance strategies and cultural practices to protect themselves from avalanche hazards. Nowadays, modern tools complement traditional knowledge, which continues to be developed on the ground by knowledge bearers. In both countries, preventing avalanches is a task involving the entire community; it forms an integral part of the everyday culture of the communities concerned and underscores the importance of solidarity in crisis situations.

Tajikistan— Chakan, embroidery art in the Republic of Tajikistan—The art of Chakan embroidery is the practice of sewing ornaments, images of flowers and symbolic drawings with colourful threads on cotton or silk fabrics. Chakan embroidery is used to decorate clothing and household items, and features symbolic depictions and mythological images relating both to the natural environment and the cosmos, expressing people’s hopes and aspirations. The products are expressions of beauty and of the ties that connect humans and nature. The younger generation learn the art from their mothers, grandmothers and older sisters, as well as through the ‘ustod-shogird’ (master-student) method.

Thailand—Khon, masked dance drama in Thailand - Khon, the Khon Masked Dance-Drama in Thailand, is a performance art combining graceful dance movements, instrumental and vocal renditions and glittering costumes. Khon performances, which have a strong didactic function, depict the life and glory of Rama, the hero and incarnation of the god Vishnu, who brings order and justice to the world. While traditionally Khon was transmitted in the royal or princely courts and in dance masters’ households, nowadays transmission occurs mostly in educational institutions, while still adhering largely to traditional methods.

Tunisia—Pottery skills of the women of Sejnane—The pottery skills of the women of Sejnane contribute to the practice of a specific technique in the production of terracotta artefacts for domestic use. They are decorated with two-tone geometrical patterns reminiscent of traditional tattoos and Berber weaving. All stages of the pottery-making process are performed by women, but men are involved in the sales process, making this a family-based craft. The women of Sejnane have adapted their craft to modern-day needs and fluctuations in demand, demonstrating a capacity for innovation.

Zambia—Mooba dance of the Lenje ethnic group of Central Province of Zambia—Mooba is the main dance of the Lenje ethnic group of the Central Province of Zambia, performed since pre-colonial times. On certain occasions, when the dance reaches its peak, ancestral spirits called BaChooba take possession of some lead dancers. The spirits are then said to take the lead in dictating the flow of the dance, drumming and singing. Mooba is performed during social functions open to the public and attract a wide audience due to their entertaining nature.

The Committee has also decided to add the Land-of-Legends programme, for promoting and revitalizing the art of storytelling in Kronoberg Region (South-Sweden) to the Register of Good Safeguarding Practices, which groups projects, programmes and activities that reflect the objectives of the UNESCO Convention for the Safeguarding of the Intangible Cultural Heritage.