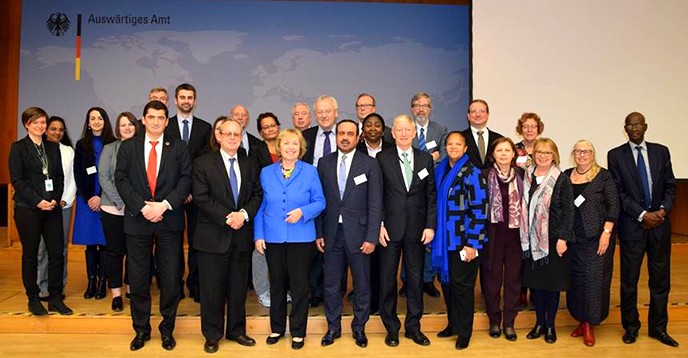 The meeting, jointly organized by UNESCO and the German Federal Foreign Office in cooperation with the German Commission for UNESCO and took place from 1 to 4 March 2017 at the Staatsbibliothek zu Berlin. The meeting, chaired by Dr. Abdulla Alraisi, Director-General - Under Minister of the National Archives of UAE, and Chair of the International Advisory Committee (IAC) of the MoW Programme, brought together IAC experts and members of the two working groups tasked to review the Statutes, Rules and overall functioning of the Programme.

The objective of the meeting was to exchange and consolidate the expressed views on the review process and the future directions for improvement of the Memory of the World Programme. The meeting also formulated specific recommendations to the Director-General for consideration by Member States on how to address a range of issues, including those relating to procedures for nominations that have been called into question, and new challenges created by the global move to digitization, in order to achieve the full potential of this important Programme.

The MoW Programme has grown significantly since 1992, date of its establishment, with the proliferation of activities, events, committees and registers, and the accumulation of operational experience. The adoption of the Recommendation on the preservation of, and access to, documentary heritage including in digital form by the General Conference in 2015 also required that the General Guidelines of the Programme be modified in accordance with the provisions of this unique normative instrument.

The MoW Programme Review is undertaken as a result of the decision of the International Advisory Committee (IAC) taken in October 2015.  It seeks to explore means for further strengthening the Programme by improving visibility, resource mobilization, transparency and dialogue and was welcomed by the UNESCO Executive Board at its meeting in April 2016. The MoW Review is conducted on a global scale, including a wide process of inclusive consultation both with experts and with Member States. The set of recommendations formulated in Berlin synergize the different views expressed  by the IAC and the experts of the two working groups, taking into consideration the comments made by Member States during the online consultation.

On the occasion of this meeting the experts had the opportunity to openly exchange views with State Minister Professor Maria Böhmer on a variety of questions related to the Memory of the World Programme and to the needs for preservation of the global documentary heritage by conservation and education.

This year the Memory of the World Programme celebrates its 25th anniversary. UNESCO launched the Memory of the World Programme in 1992 to guard against collective amnesia calling upon the preservation of the valuable archive holdings and library collections all over the world ensuring their wide dissemination. The Programme vision is that the world's documentary heritage belongs to all, should be fully preserved and protected for all and, with due recognition of cultural mores and practicalities, should be permanently accessible to all without hindrance. The Programme is intended to protect documentary heritage, and to help networks of experts to exchange information and raise resources for the preservation of, and the access to, documentary and archival collections of valuable records.