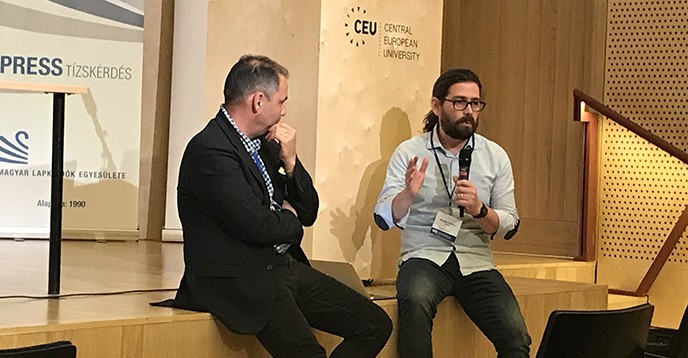 Strengthening media self-regulation is the right response to fake news insisted Ms. Elina Grundström, Chair of the Council for Mass Media in Finland at the annual meeting of European press councils. “Well functioning media self-regulation guarantees that news and information are verified before they are published. If fact-checkers are seen as heroes of our time to counter “fake news”, it is nevertheless not an adequate solution. Quality journalism and media self-regulation is actually opposite to this kind of fact-checking. Our codes demand that information is checked before and not after publishing”, - said Ms. Grundström.

These opening remarks were setting the tone of the Annual Meeting of the Alliance of Independent Press Councils in Europe (AIPCE), gathering on 12 and 13 October 2017 in Budapest, Hungary. The conference highlighted the central role of independent press and media councils in maintaining the quality of journalism and in educating the public about which sources can be trusted.

UNESCO was taking part in the event both as a speaker and as a sponsor of seven participants from South East Europe and Turkey within the framework of the project “Building Trust in Media in South East Europe and Turkey”. Representatives of self-regulatory bodies from Albania, Bosnia and Herzegovina, the former Yugoslav Republic of Macedonia, Montenegro, Serbia, Turkey, and Kosovo[1] took part in the conference. It provided them with a unique opportunity to exchange with peers on current challenges and remedies for media ethics.

The program of the conference addressed the ethical questions that arise both in captured media environments and in digital media environment dominated by few ISPs or social media platforms. In this respect, representatives of press councils of the conference initiated a dialogue with Patrick Walker, Director of Media Partnerships at Facebook on the need for social media platforms to start operating a distinction between the content produced by media professionals and already under supervision of independent media councils in comparison with other types of content shared on these platforms.

In the wake of the fueled spread of misinformation and hoaxes online, Facebook has launched a news integrity initiative to help people make informed decisions about what they read and share online. Some representatives of press councils believe that a cooperation between Facebook and self-regulation mechanisms could help media users recognize the information produced by journalists committed to ethical and professional standards.

Adeline Hulin from UNESCO presented the results of a research regarding the financial independence and sustainability of the members of the AIPCE. It showed that the budget of many media councils has been impacted by the drop of the advertising revenues of print media. She also explained that concrete mechanisms to ensure long-term financial sustainability of press councils are rarely in place. Yet, the budget of self-regulatory mechanisms is usually guaranteed by the desire of the media industry to avoid state regulation and in the recognition by the media profession of the crucial role played by accountability mechanisms.

Participants of the events got the possibility to engage in working groups on various topics such as media ethics and the coverage of terrorism, fake news or how to establish a new press council. This one was particularly useful for new participants of AIPCE such as the Albanian Media Council. “The conference was very helpful to understand what challenges lie ahead of us when creating a new self-regulation mechanism, in particular how to keep a media council independent and financially sustainable in a media ecosystem where political leaders and media owners work together in a symbiotic way,” said Koloreto Cukali, representative of the Albanian Media Council. Thanks to UNESCO’s support within the EU-funded project “Building Trust in Media in South East Europe”, the Albanian Media Council is receiving funding to set up an office and a website, start operating and take part in various training and events such as this Budapest conference.

As a final result of a conference, the Turkish Press Council was accepted and welcomed as a new member of the Alliance of Independent Press Council in Europe.

Fostering Freedom of Expression, Press Freedom on All Platforms
Hungary