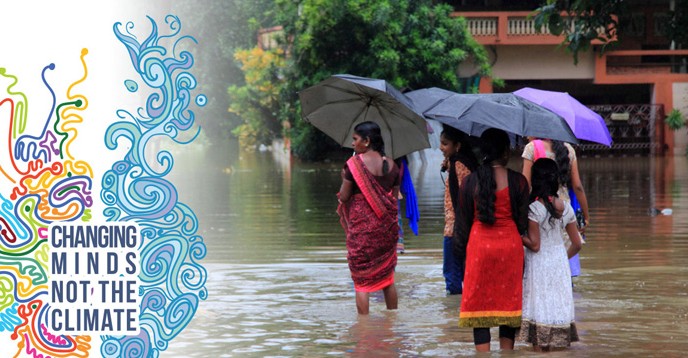 Named as the biggest challenge of the 21st century by world leaders, climate change is popularly conceived of in logistical, scientific and economic terms and not ethical terms. However, following the COP23, the 195 UNESCO Member States formally adopted on 15 November 2017 the Declaration on Ethical Principles in relation to Climate Change. This Declaration speaks to the responsibility to address the challenge and reinforces ethics at the center of the discussion. The Declaration sets out six ethical principles:

The Declaration then moves on to elaborate how these principles could be applied in different domains: in science, technology and innovation systems; in education, in risk management processes, in public awareness raising, in international cooperation and in governance for accountability.
In order to fully grasp an ethical perspective addressing climate change, one has to reflect on the following questions: Why are ethical principles important to combat climate change? And, why is a declaration of ethical principles necessary in relation to climate change?

Ethics are important because it is a philosophical technique that can help society take a step back and have a broader view of what the causes and consequences of climate change are, and how to react and act accordingly. As an illustration, climate change is viewed as the greatest threat to national development especially for small island developing states. For example, Saint Vincent and the Grenadines is an island state that has been impacted by stronger hurricanes, longer droughts, more frequent flash flooding and sea level rise in the last 20 years. In December 2013 for instance, damages from the troughs impacting the island were estimated at US$93.3 million. In such a situation, sticking to the facts and economic effects of climate change is not enough to combat it.

Indeed, the ethical principle of equity and justice pushes States and other pertinent actors to facilitate and encourage public awareness, and participation in decision-making and actions by making access to information and knowledge on climate change as well as on the means of how to implement mitigation and adaption actions, widely available. This should be done through strengthening social dialogue and communication by the media, the scientific communities, civil society organizations and the community as a whole.

Saint Vincent and the Grenadines is a great example. In 2017, they started a climate change public education programme and campaign implemented by the United Nations Development Programme’s Japan Caribbean Climate Change Partnership (UNDP J-CCCP) in coordination with the Government of Saint Vincent and the Grenadines. The campaign aims to provide Vincentians with information on what climate change is and how people can adapt to it. Public awareness and public education is an important component of the push to integrate climate change considerations into every aspect of the life of small and most vulnerable communities.

In addition, ethical principles are necessary to combat climate change more effectively and in a more justified manner. For instance, South Korea is hit every spring with yellow sand storms blowing in from Mongolia and China. However, with the recent industrialization and deforestation of both western China and Mongolia, the yellow sand storms contain a harmful substance in the dust that can affect people’s health and cause social problems. This phenomenon is not particular to South Korea and affects both China and Mongolia as well. Therefore, there is a need to coordinate the countries’ actions in order to tackle and fight against this problem.

This is where the solidarity principle comes in. Solidarity, in this context, means that the countries affected have to recognize that they are all sharing the world we live in and cannot forgo the possibility of living on earth just to benefit themselves. Efforts to protect and enhance the world should be made in such a way that reflects the solidarity and interdependence among peoples of different backgrounds.

Through both examples, it is clear that climate change is fundamentally an ethical issue. If failure to act against climate change could have catastrophic implications, responses to climate change that are not thought through carefully, with ethical implications in mind, have the potential to devastate entire communities, create new paradigms of inequity and misdistribution, and render even more vulnerable those peoples who have already found themselves uprooted by other man-made political and ideological struggles.

With the recent release of the IPCC Special Report on Global Warming of 1.5°C, the Declaration is needed more than ever. The conclusions of the report make the strongest case for the UNESCO motto ‘Changing Minds, Not the Climate’: changing how we measure economic success, changing how we make public policy, taking vital economic services into account, changing how we educate current and future generations. The ethical dimensions of our choices for growth and development lie at the core of such transformative change. Therefore, questions such as “which values will we choose to drive economic, political and individual choices?”, “what kind of society do we want to live in, and what kind of world do we want to transmit to future generations?” are crucial to consider to combat climate change and are difficult to address without the help of the Declaration on Ethical Principles in relation to Climate Change.