The Director-General of UNESCO, Audrey Azoulay, today awarded the 2019 edition of the UNESCO Avicenna Prize for Ethics in Science to Professor Donald A. Brown, Scholar in Residence for Sustainability Ethics and Law at Widener University Commonwealth Law School (USA). This year’s Avicenna Prize, its 5th edition, was dedicated to the ethics of the environment.

Professor Brown is a world-renowned expert in environmental science and more specifically in the international climate change ethics movement. His book Climate Change Ethics: Navigating the Perfect Moral Storm (2013) provides an influential analysis of why ethical principles have been neglected and how to include them in the climate change conversation.

He has sought to ensure that applied ethics is central to climate change policy development both nationally and internationally. His compelling argument that limiting carbon emissions and mitigating climate change is the ethical imperative of our time resonates widely in the current discourse on climate change. 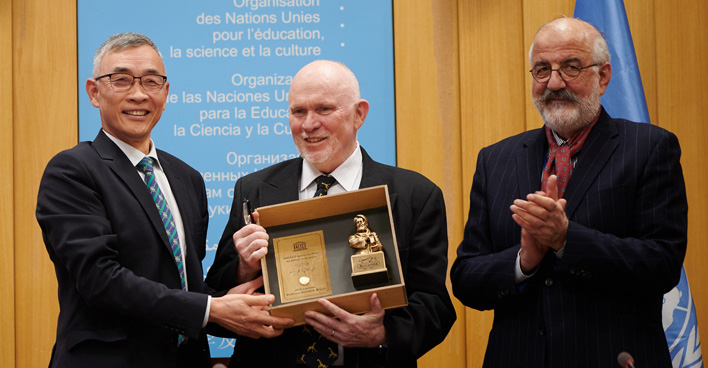 Held at UNESCO, the Award Ceremony was attended by Ambassador Ahmad Jalali, Permanent Delegate of the Islamic Republic of Iran to UNESCO whose country initiated the establishment of the Prize in 2003.

The UNESCO Avicenna Prize is named after the renowned 11th century physician and philosopher of Persian origin known in Europe as Avicenna (980-1038). A healer and humanist, Avicenna developed an exemplary holistic approach that captures the essence of ethics in science and has thus come to serve as a source of inspiration for the promotion of this concern, which is of central importance to UNESCO. It rewards the activities of individuals or groups in the field of ethics in science with the gold Avicenna Medal, a certificate, and the sum of $50,000 as well as a one-week academic visit to the donor country.