The fields of nanoscience and nanotechnology have been developing for just a few decades, but they now contribute to the economy of all countries and almost every human life. “Today, we meet to celebrate exceptional scientists and practitioners from around the world, who are pushing back the frontiers of scientific knowledge of what lies beyond our world and to transform our lives for the benefit of all”, said Miguel Clusener-Godt, Director of UNESCO’s Division of Ecological and Earth Sciences. “They impact electronics and computing, medicine, materials and manufacturing, energy and transportation… Nanoscience and nanotechnology have the potential to foster new developments in science, technology and innovation via the dissemination of new knowledge and applications.”

This is why the Medal was established in 2010 at the initiative of the International Commission responsible for developing the Nanoscience and Nanotechnologies theme for the Encyclopedia of Life Support Systems (EOLSS) . Since then, 46 Medals have been awarded to prominent scientists, institutions and public figures, such Isamu Akasaki, winner of the 2014 Nobel Prize in Physics, Zhores Alferov, winner of the Nobel Prize in Physics in 2000, and Chunli Bai, President of the Chinese Academy of Sciences.

The 2018 UNESCO Medals for contributions to the development of nanoscience and nanotechnologies were awarded to:

Sergeev Alexander Mikhaylovich – Russian Federation
President of the Russian Academy of Sciences, Deputy Chairman of Russian Presidential Council for science and education.
His expertise in plasma physics, nonlinear dynamics of optical systems and highly sensitive optical measurements are internationally recognized. He has made important contributions to the fields of optical tomography of bio-tissues, and for created of the most powerful laser that can generate impulses with peak power of hundreds petawatts.

Tatartchenko Vitali Antonovitch – France
Consultant at the Aix-Marseille University in France, Vice-Chairman of COSPAR (International Committee of Space Research).
He provided the theoretical basis of PeTa effects (Perelman-Tatartchenko effect) – the physical phenomenon of characteristic radiation accompanying first order phase transitions - and demonstrated its existence experimentally. On the basis of the PeTa effect he developed a new conception of cavity-less lasers and models for cavitation luminescence, sonoluminescence and laser induced bubble luminescence.

Ismail Elnaggar Mohammed – Egypt and United States of America
Founding Director of the Khalifa Semiconductor Research Center in the United Arab Emirates.
His many achievements include the development of a self-powered wearable device that can predict the onset of a heart attack ahead of time.

Kauppinen Esko Ilmari – Finland
Manager of the NanoMaterials Group at the Department of Applied Physics of the Aalto University School of Science
His research focuses in gas phase synthesis of nanomaterials, including carbon nanotubes and polymer-drug composite nanoparticles and their characterization with advanced electron microscopy methods. These fields create new opportunities for drug delivery, inhaled at the micro and nano scales, which are very promising to treat diabetes and many other diseases.

Nassiopoulou Androula Galiouna – Greece
Director of Research and Head of the "Nanostructures for Nanoelectronics, Photonics and Sensors" research group at the National Centre for Scientific Research Demokritos in Athens, President of the General Assembly of the European Institute of Nanoelectronics.
She pioneered the fabrication of vertical silicon nanowires on the Si wafer and developed innovative applications of Si nanowires, nanocrystals and porous Si, which include low-loss transmission lines and antennas on the Si wafer working up to 210 GHz, thus enabling fast communication on the Si chip, nanocrystal memories, high capacitance density microcapacitors for energy storage, high performance miniaturized Si thermal sensors applied in a respiration system and a flow meter for gas engine etc.
When receiving her medal, she stressed the importance of caution when dealing with nanostructures, since their properties are not yet fully known and of aiming for societal benefits in all research. Through miniaturization, Microelectronics made devices faster and cheaper and revolutionized computing and communication systems. This has been  now expanded to the general field of Nanotechnology, fostering applications in all fields of life, including new medical applications, new drugs and drug delivery systems, she explained. "Safety issues should thus be always one of the main priorities to be studied, discovered and applied.
(...) Finally, as scientists we should stay committed and engaged that Nanoscience and Nanotechnology and its innovative applications stay within the spirit of Unesco for sustainable development for all, against poverty and for a peaceful world, for the profit of all societies."

Zehetbauer Michael Josef – Austria
Head of the Faculty Group "Physics of Nanostructured Materials" at the University of Vienna.
He has been working on increasing the efficiency of functional materials such as nanostructured thermoelectrics, hydrogen storage materials, and biodegradable implant materials.

Mansurov Zulkhair – Kazakhstan
Director-General of the Institute of Combustion Problems, Doctor of Science, Professor
He has made important contributions in the production of nanocarbon materials and carbon nanotubes and graphene. His research focuses on hydrocarbon combustion kinetics and mechanisms, the structure of cold and sooting flames, and investigation the functions of nanocarbon materials.

Chekhonin Vladimir Pavlovich – Russian Federation
Vice President of the Russian Academy of Sciences. Founder and Head of the Department of Medical Nanobiotechnologies of the Russian National Research Medical University
His fields of research include development of nanotechnological visualization systems and the targeted delivery of therapeutic agents and genetic material to target cells, and investigation of nanotechnological approaches to genodiagnostics and bioprotection in socially significant diseases. This includes the targeted delivery of diagnostic compounds to cancer cells, which can bring us closer to better understanding and treating oncological diseases. 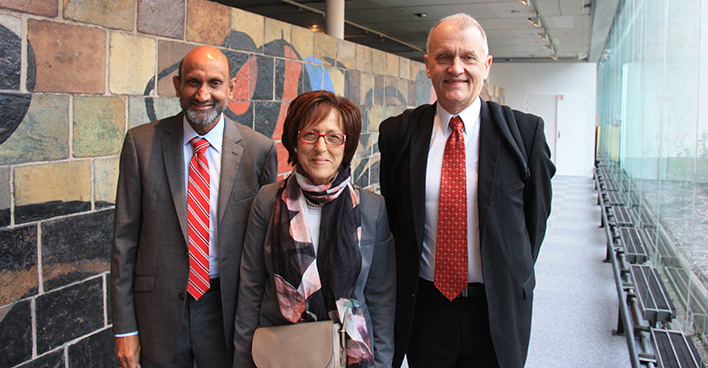 Jagadish Chennupati, Nassiopoulou Androula Galiouna and Esko Ilmari Kauppinen were among the 10 eminent scientists who received the 8th UNESCO Medals for contributions to the development of nanoscience and nanotechnologies. © UNESCO / Jake Lewis

About the Encyclopedia of Life Support Systems (EOLSS)
EOLSS is the world’s largest web-based source of professional knowledge on trans-disciplinary science base for sustainable development, as a result of the joint efforts of over 8000 specialized authors in over 100 countries. The encyclopedia is a virtual dynamic library that is aimed at a wide audience, from pre-university students to educators and professional practitioners, as well and policy analysts and decision-makers. By providing a complete and accessible body of knowledge, EOLSS aims to lead to the fulfillment of human needs by simultaneously considering socio-economic and technological progress that may lead to conservation of Earth’s natural systems.

More information :
•    UNESCO Medals for contributions to the development of nanoscience and nanotechnologies