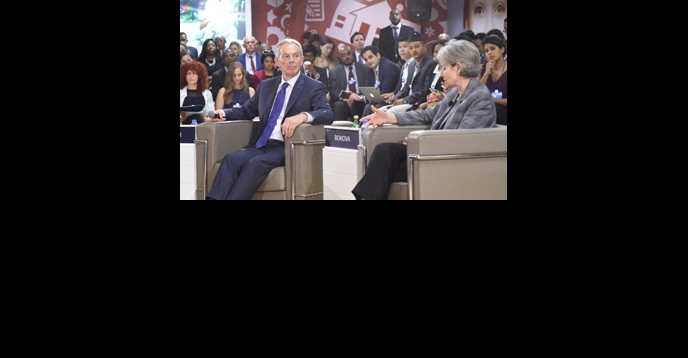 Education is a global public good and partnerships are the name of the game to ensure that all people and countries reap its benefits, said UNESCO Director -General during a plenary panel with former British Prime Minister Tony Blair and Martin Sorrell, CEO of the WPP advertising agency, in the context of the Global Education and Skills Forum in Dubai on March 13, 2016.

'Today we have one agenda for education that is rallying governments, civil society, business and academia, and it is a global agenda that is relevant to all countries - education is about opportunity, growth, reducing inequality, tackling climate change and changing mentalities,'  said Ms Bokova.

Since the adoption of the MDGs, education has gained traction as a political priority. 'Today, we see real political commitment to education. Sustainable Development 4 for the first time for 9 years of compulsory education for all countries and a 12 year cycle of education. This has huge significance - because education is a transformational goal linked to the achievement of all the others and that changes the lives of people.'

Tony Blair concurred that 'people understand that the biggest determinant of whether a country succeeds or fa‎ils. It's not just about the number of kids in the door, but about whether they are being taught, about quality and standards, about skills to operate in the modern world.. you have to create a system that allows innovation to happen,' he said, noting the importance of exchanging best practices.

Sir Martin Sorrell drew attention to tensions between the long term nature of education planning and shorter-term political demands, as well as for the need for education to adapt to a  fast-changing technology base.

Sharing his experience with ministers present, Mr Blair recalled that' educational change and reform is one of the most difficult things you do in government but in the end you wish you had done more.'

Key elements to succeed are data that tell the truth about the system, raising the status of teachers and school leadership.

Speakers discussed ‎education's role in equipping youth with skills for jobs of the future - and skills for living together in a world of diversity and connectivity.

'We have to empower youth with skills for work and skills to be citizens today, to live together, to promote tolerance, intercultural understanding, human rights and respect for diversity,' drawing attention to UNESCO's leadership in advancing the concept and practice of global citizenship education.

She stressed the influence of education in the prevention of youth radicalization and violent extremism, commending the work of the Tony Blair Faith Foundation on curricula, training, research and awareness-raising
Turning to the refugee crisis, Ms Bokova stressed the urgency of increased humanitarian aid for education and the foreseen establishment of a common platform for education in emergencies at the World Humanitarian Summit in May.

At the end of the day, Ms Bokova attended the second edition of the Global Teacher Prize, awarded by the Varkey Foundation to Ms Hanan Hroub of Palestine, in a ceremony featuring messages from US Vice President Joe Biden, former President Bill Clinton, HH Prince William and His Holiness Pope Francis who described teachers as 'artisans of humanity and builders of peace' and announced the winner.